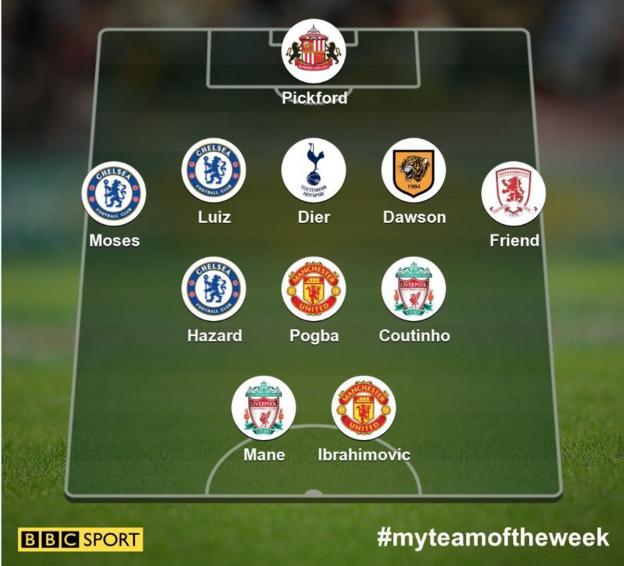 Liverpool moved to the top of the Premier League with a resounding 6-1 win over Watford on the day the north London derby ended in stalemate at Emirates Stadium.

Chelsea produced the pick of Saturday's performances with a five-goal thumping of Everton, Sunderland picked up their first win of the season, Manchester City were held by Middlesbrough at the Etihad, Burnley beat Crystal Palace, and West Ham and Stoke ended honours even at London Stadium.

Do you agree with my team of the week? Or would you go for a different team? Why not pick your very own Team of the Week from the shortlist selected by BBC Sport journalists and share it with your friends?

What a win. The save from Jack Wilshere was fabulous but it was the tip over the bar from Joshua King that was match-winning. Ten-man Sunderland desperately needed this victory and it took a heroic performance from Pickford to produce it.

Sunderland boss David Moyes said the club's visit to a local factory was enough to galvanise the squad into realising playing football for a living was considerably better than that line of work.

What, they've only just worked that out?

I can't be seeing right. Victor Moses playing right wing-back? Cutting in on his left side and striking the ball with ferocious accuracy? Swinging balls into the box with his right foot like a boomerang and with terrifying effect?

I have never seen the Nigerian defend with such competence, in fact I've often been told by coaches - mostly English and trained by the Football Association - that players like Moses were incapable of producing such performances. That's probably why Chelsea and most Premier League clubs no longer invest in English managers these days.

If Moses keeps playing at this rate, Chelsea may have stumbled on another Ashley Cole.

I think I owe Chelsea boss Antonio Conte an apology. I was one of those pundits who gasped and then sneered at his decision to bring Luiz back to Stamford Bridge.

Yet what I have witnessed since the Brazil defender's return is a player utterly focused on defending and taking pride in keeping clean sheets.

Against Everton, he stuffed Romelu Lukaku in his right pocket and Yannick Bolasie in his left. I cannot remember a single chance Everton had throughout the 90 minutes in one of the best defensive displays I have seen by a Chelsea team in years. And it was led and directed by Luiz. Magnificent.

I first interviewed Dier when he was just starting to burst onto the scene. Since then he has become an established England international and the fulcrum of a Tottenham team that is desperately trying to claw itself from out of the shadow of their north London rivals - a point I put to him during an interview for Football Focus this week.

He bristled slightly at the notion Arsenal always seem to finish above Spurs and when I asked if it were time that position changed.

Dier's performance against the Gunners, in what was an otherwise tame affair, was solid as a rock. But while his display may have prevented Arsenal going top, I still wouldn't bet against Arsenal finishing above Spurs come May.

Boy, Hull needed these three points. They had been leaking goals and dropping points at an alarming rate heading into this match, while Southampton were in decent form having beaten Inter Milan in the Europa League in midweek.

If there was ever a day when you wanted your captain to step up to the plate for his team-mates and manager - all of whom were under immense pressure after an appalling run of six straight league defeats - this was it.

Dawson did just that with both a commanding display at the back and the winning goal. With Sunderland also winning and Middlesbrough picking up a creditable point at Manchester City, this result has given the Tigers renewed hope that they can really stay in the league and means manager Mike Phelan might keep his job.

If Middlesbrough are going to survive in the Premier League they must remain fearless in the face of adversity.

Their performance in the latter stages of the game against Manchester City was immense and, on chances created, they could have quite easily come away with all three points. Boro kept their nerve under extraordinary circumstances and to see Friend produce such a fantastic cross for Marten de Roon's equaliser - at the most critical time of the match - was incredibly impressive.

It cannot be underestimated what is required for a player to produce the right ball when time is running out.

Anyone who regularly reads this feature will know Philippe Coutinho has featured heavily in recent weeks.

Yet October's player of the month is playing so well at the moment it seems quite likely - after Liverpool's performance against Watford - he will receive November's award as well. The only problem with all this attention is it is alerting the likes of Barcelona and Real Madrid to the Brazilian's talents.

Liverpool are riding high at the moment largely because of Coutinho's exploits, but should the Reds fail to win a trophy this season he may end up at a club that can.

This player is starting to irritate me. We see moments like on Sunday against Swansea, when he scores a goal that is so technically brilliant it takes your breath away, but in the big games he seems to go missing.

Against the Swans - and along with Michael Carrick and Wayne Rooney - he ran the show, but against Chelsea at Stamford Bridge recently he went AWOL.

I played alongside Bryan Robson and Arnold Muhren while on loan at Manchester United in the 1980s - and with them the bigger the game, the greater their performance.

For £89m I would like to see Mr Pogba turn up for the big games as well, if he doesn't mind. He can bang his chest and claim he's the man all he wants then.

Every club needs a star and Chelsea have theirs. His name is Eden Hazard.

In a team that looks impregnable at the moment, Chelsea boss Antonio Conte has given Hazard the freedom of the Bridge, to roam and float wherever he wants on the condition he destroys the opposition. What a fantastic arrangement between coach and player.

How refreshing to find a coach whose first priority is to 'bolt the back door' but then demand his players express themselves once the door is firmly shut. This was a wonderful display of skill and artistry by Hazard, who came off the pitch to a standing ovation after 80 minutes having scored two goals and ripped Everton to shreds.

He's had a lean time of it lately. Ibrahimovic had gone six league games without scoring a goal, which to a striker is like turning off his life-support machine.

Nevertheless he hung in there and, with two goals against Swansea, he appears to be well into his recovery.

Of course, no goalscorer can survive such barren spells without the backing of his manager and Jose Mourinho cannot afford to disregard his striker in the same manner he did Diego Costa at Chelsea. A repeat of such poor judgement would prove very costly indeed.

What a purchase this lad is proving to be. His goals against Watford demonstrated natural striking instincts.

Mane is what I regard as an all-round player but I wouldn't put him in the same category as a fox in the box like Daniel Sturridge, for example. Yet his goals against the Hornets bore hallmarks of precisely those predatory instincts.

Mane seems to be getting better with every game and I wonder if he could become the player Luis Suarez was for Liverpool. He certainly has all the tools.