England and Scotland meet for the 113th time at Wembley on Friday night as a rivalry which "is known throughout the world" returns.

The oldest fixture in international football is the first competitive meeting of the sides since 1999.

With only one team guaranteed a place at Russia 2018, England top Group F after three games with Scotland fourth.

Wayne Rooney returns to captain England with Scotland captain Darren Fletcher saying a draw would be a good result.

Scotland won at Wembley but England won 2-1 on aggregate.

Does Southgate want the England job?

England Under-21 boss Gareth Southgate was put in charge of the senior team for four games following the departure of Sam Allardyce after only one match.

Allardyce left following a newspaper investigation claiming he offered advice on how to "get around" rules on player transfers.

Under Southgate, England beat Malta 2-0 and drew with Slovenia in World Cup qualifiers.

After the match against Scotland, England meet Spain in a friendly at Wembley on 15 November.

Asked if he wanted the job on a permanent basis, he said: "I'm really enjoying being in the role.

"What happens to me is not important. We have to win this game for the country, and because we want to be top of the group and heading to [the 2018 World Cup] in Russia.

"What happens to me is important to my family, but other than that it isn't the purpose of the game. I want the players to enjoy the football and play well.

"My focus is 100% on the match and it would irresponsible and unprofessional for it to be any other way."

'It's known throughout the world'

Scotland manager Gordon Strachan - who has faced scrutiny coming into the game - says he does not need to impress on his players the importance of the match.

"My players are intelligent enough to understand the fixture," Strachan said. "I don't think I have to show them anything.

"They know the fixture, everybody knows the fixture. It's known throughout the world. So I don't have to show them the importance.

'It's not a normal game'

"It doesn't get much bigger than this - there will be a little more fire in the belly, it being England v Scotland," Scotland captain Darren Fletcher said.

"Every time you lead your country out it is important but there is no bigger stage than Wembley in front of 90,000 fans." 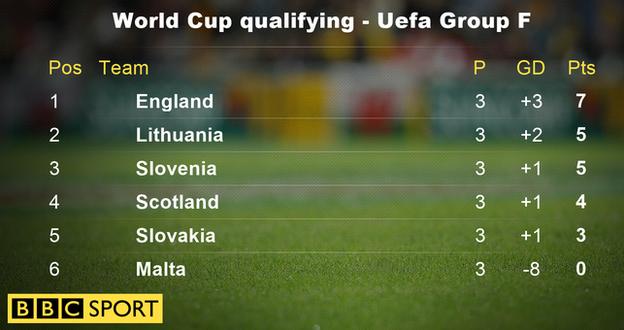 England midfielder Jordan Henderson, who captained the team against Slovenia, said: "It is a massive game. If you look at the history of the fixture, it's not a normal game.

"We watched a video of a lot of the past games. There was a few I can remember, especially Paul Gascoigne's goal at Euro 96.

"The lads know the importance of the game, not only because it's England v Scotland but also because we want to qualify for the World Cup."

Henderson also addressed criticism that England are a team lacking in leadership.

The Liverpool captain told BBC Radio 5 live: "Everyone's entitled to their opinion - I've learned that over the years - but it doesn't really matter what other people think, it only matters what the team thinks and what the manager and the management team think.

"They are the only important opinions that matter to us. I know there are leaders in the team, I know we've got great characters so that isn't a question in our dressing room.

"The question is can we got out there and perform at the highest level to win the game. I'm confident we can."

New tennis world number one Andy Murray is expected to be among the huge Scotland support at Wembley, with Fletcher confident his side can be inspired by Murray's rise through the ranks.

Murray became the first British singles player to be world number one since computerised rankings began in 1973 last week.

"For us, he is an inspiration for what he has achieved in tennis," said Fletcher.

"His never-say-die attitude, looking to keep improving and battling for a number of years against arguably some of the greatest tennis players of all time and to keep driving himself forward to try to improve those small margins.

"He has fought to be the number one tennis player in the world so we can take inspiration from him as a sportsman, showing that there is no real ceiling on what you can achieve if you dedicate yourself.

"If you have real dedication and desire, you can achieve almost what you wish."

'The poppy is very important for the country'

The Football Associations of England and Scotland have said they will let players wear black armbands with poppy emblems as the game takes place on Armistice Day. Fifa believes that could breach football's rules on displaying "political, religious or personal slogans, statements or images" and has warned the countries could face sanctions as a result. Both FAs said they are willing to face any punishment - though they insist it will not come to that.

"We're just pleased everything was resolved last week, that we can honour the sacrifice of those who have gone before us," said Southgate.

"It's part of our identity as a nation."

Henderson added: "The poppy is very important for the country and the players to remember what those people did for this country, the sacrifice."

It's not meant to be easy! Use our shortlist and pick who you think would make the greatest modern-day England-Scotland XI.