The midfielder is England's fourth most-capped player with 114 appearances and captained the side at three of the six major tournaments he played at.

"I feel lucky to have experienced so many wonderful highlights over the course of my career," said Gerrard.

"I have had an incredible career and am thankful for each and every moment of my time at Liverpool, England and LA Galaxy.

"I fulfilled my childhood dream by pulling on the famous red shirt of Liverpool."

Gerrard had been linked with the manager's job at League One side MK Dons after announcing he would leave LA Galaxy, but said on Wednesday the opportunity came "too soon" for him.

Gerrard, who is working towards his Uefa A coaching licence - the second-highest qualification available, has also been linked with moves to Celtic and Newcastle United, as well as a return to Anfield as a coach.

On Thursday, he said he will take time to consider his options before making an announcement "very soon", adding: "I am excited about the future and feel I still have a lot to offer the game, in whatever capacity that may be."

Liverpool manager Jurgen Klopp played down talk of Gerrard returning to the Premier League club in a coaching role, and said he should be given "room and space to jump in and learn something new".

"When something is announced then we will talk," said the German, who became Reds boss in October 2015. "It is clear that one day in the future there will be something to announce, that is pretty sure too, but until then there is nothing to say.

"The first thing you should all learn is that, if someone wants to help Steven Gerrard, stop being so excited about each step he is doing next.

"The door is always open for him. From our side, if he wants to make a different career to his former career then we want to help him.

"There is nothing else to say - but maybe that is already too much."

"I think it'll be a hugely positive step to learn from Klopp at a club he loves," said the 39-year-old.

"The only difficulty might be the dynamic that creates. To go in as a coach and work around Jurgen and his team, somebody in a job might have to step aside. Maybe to go in as the under-21 or under-18 coach and learn his trade that way might be an option.

"Somewhere down the line, he will be back at Liverpool."

Gerrard was made Liverpool captain by Gerard Houllier in 2003, and led the side to Champions League success in 2005, scoring the Reds' first goal as they recovered from 3-0 down at half-time to beat AC Milan on penalties in the Istanbul final.

"I am proud to have played over 700 games for Liverpool, many of which as captain, and to have played my part in helping the club to bring major honours back to Anfield, none more so than that famous night in Istanbul," he added.

"I feel privileged to have won 114 England caps and to have had the honour of captaining my country."

"I was lucky to play alongside some great players and under some fantastic managers during my time at Anfield and would like to thank each and every one of them, as well as all of the backroom staff at the club throughout my time there for the fantastic support they showed me," he added.

Gerrard made his England debut against Ukraine in 2000 and scored his first international goal in a 5-1 win in Germany in a World Cup qualifier the following year.

Fabio Capello was the first England manager to make Gerrard his captain in 2008, but it was not until 2010 that he took on the role on a more permanent basis when he stood in for the injured Rio Ferdinand at the World Cup.

Gerrard kept the captaincy for Euro 2012, the year in which he won his 100th England cap, before announcing his retirement from international duty after a group-stage exit at the 2014 World Cup.

Where does Gerrard rank in Liverpool history?

In 2015, 10 years on from that famous win in Istanbul, Liverpool fans voted Gerrard the best player in the club's history.

Gerrard, who scored 186 goals for the Anfield club, endeared himself to supporters with heroic performances such as in Istanbul and in the Reds' FA Cup final win over West Ham a year later.

"I think he is Liverpool's second best player behind Kenny Dalglish. There were 10 or 12 years where Steven, in any outfield position for Liverpool, would have been the best player in the team," said Lawrenson.

"A one-club man who was the scorer of great goals, a great passer and a player who drove the team on. Take Gerrard and Dalglish out of any side and it would be completely different."

Gerrard may have never won the Premier League, with Liverpool finishing second in the table on three occasions, but the midfielder boasts some of the competition's most impressive statistics.

Even in 2013-14 - the season of the infamous 'slip' against Chelsea at Anfield, when Liverpool eventually finished runners-up to Manchester City - Gerrard contributed 13 goals and the same amount of assists.

Only two players have made more appearances for a single club in the competition - Ryan Giggs (632) and Jamie Carragher (508) - with the Anfield stalwart making the PFA Premier League team of the year in eight of his 17 seasons at the club.

His place in Anfield folklore was only strengthened on the back of impressive performances against Liverpool's rivals, netting 10 goals in all competitions in Merseyside derbies against Everton, including a hat-trick in March 2012. 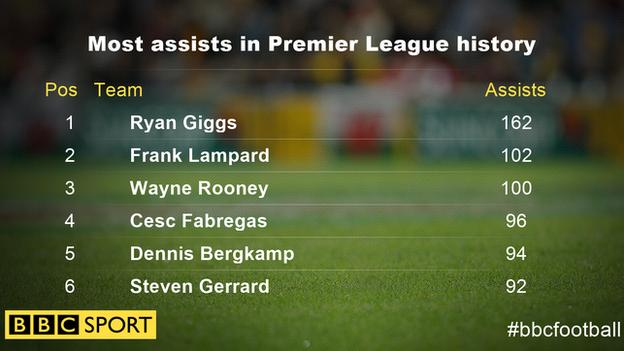 Steven Gerrard belongs in football's elite for his feats, a towering, iconic figure who many regard as Liverpool's greatest player after a 17-year Anfield career.

Gerrard, often single-handedly, inspired Liverpool as the club's domestic supremacy waned, most famously in the dramatic Champions League final win against AC Milan on penalties in Istanbul in 2005 after Rafael Benitez's side came from 3-0 down at half-time.

He became a shining symbol for the club and its supporters with 186 goals in 710 appearances, also winning two FA Cups, the Uefa Cup and three League Cups as the title consistently eluded Liverpool.

Gerrard suffered agony as well as ecstasy at Liverpool and his slip against Chelsea at Anfield when they looked certain to win the Premier League in 2014 will surely haunt him - but no-one associated with the club would ever hold that against a magnificent player who was a loyal, inspirational leader and personality throughout his career.

He may not have hit those heights with England as a string of major tournaments produced disappointment, but he was not alone among Premier League greats in that regard and always served his country, many times as captain, with distinction.

Gerrard's former Liverpool team-mate Dirk Kuyt told BBC Sport: "It was a great honour to play with Stevie. He was the best player I played with and I played with people like Luis Suarez, Fernando Torres, Ruud van Nistelrooy and Arjen Robben.

"He had everything. As a midfielder, he scored so many goals and he was an unbelievable captain for Liverpool on and off the pitch. He was not a big shouter but the words he used always counted. He talked with his feet.

"I can't see him not being involved in football. I don't know what he wants to do but I think he'll be a great manager." 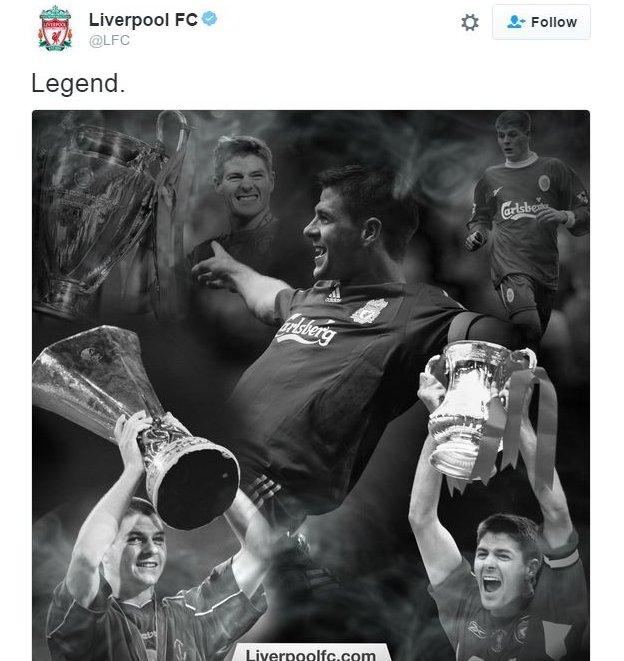 602 comments
Back to top
unknown