Alan Shearer and Chris Sutton's famous 'SAS' partnership fired Blackburn to the 1995 league title and is remembered as one of the most effective strike pairings in Premier League history.

They will link up again on Saturday night when they join another legendary goalscorer, Gary Lineker, in the studio for Match of the Day at 22:20 GMT on BBC One and the BBC Sport website.

How do they see the weekend action panning out? Shearer and Sutton tackle some of the big issues that will affect the key matches at both ends of the table, and give their verdict on some star strikers who are in and out of form. 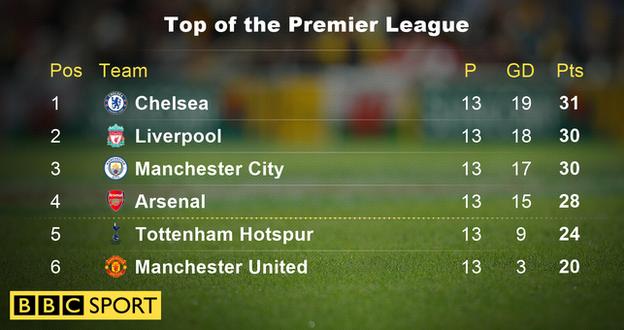 Alan Shearer: "City have drawn their last three home league games against Everton, Southampton and Middlesbrough so what better way to bounce back than to beat a high-flying Chelsea side who will be full of confidence after coming from 1-0 down to beat Tottenham last weekend.

"Doing that will be far from easy, obviously. Chelsea have looked solid and dominated sides since they switched to playing three at the back at the start of their winning run.

"Victor Moses is a completely different player in their 3-4-3 system and their whole team looks comfortable playing it. In attack, Eden Hazard and Diego Costa are excelling, which will give them hope of breaking down a City side who have only had one clean sheet in their last 14 games. 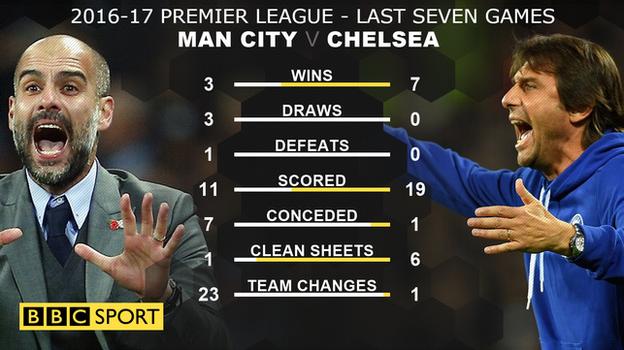 "But if there is a game where I would expect City to get it right and raise their levels it would be in a fixture like this one.

"Both sides have come into it fresh with no midweek fixtures and it is a mouth-watering prospect to see City's Sergio Aguero and Chelsea's Diego Costa, two of the best forwards in the league, going head-to-head.

"Chelsea have only conceded one goal during their seven-game winning run. For me, the key to them extending it is how - and if - they can handle Aguero." 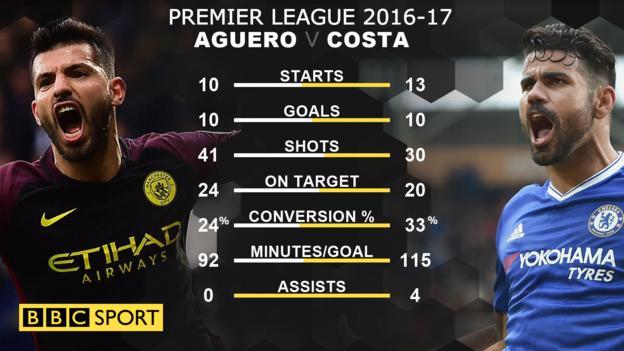 Chris Sutton: "If I was picking one of them, I would still go with Aguero but Costa is back to his best after being written off by many last season.

"Costa leads the line so well, always brings other players into the game and has got his hunger and sharpness back, but Aguero on his day is still the outstanding striker in the Premier League.

"In terms of the game, I just have a feeling City will nick it.

"We know how good Chelsea are at the back and there is no doubt they are serious title contenders now, but City have got home advantage and more quality than Antonio Conte's side have come up against in this winning run.

"If City's attacking players click, even Conte will not be able to keep them out.

When will Vardy score again... ?

Shearer: "Vardy's confidence must have taken a battering in the last few weeks.

"Last season every time he touched the ball, he seemed to score. Last weekend he didn't even have a shot. But there is only so long you can blame a lack of confidence - only he can put it right.

"That means getting back to doing everything he did last season and hoping his luck in front of goal changes.

"Last season he was aggressive in his running, stretched teams and ran in behind defences. His energy and running seemed to inspire his whole team. We just haven't seen enough of that from him this season.

Sutton: "Vardy has gone far too long without a goal for Leicester but he has scored for England during that time, so there should not be too much panic over his form.

"He is reliant on being given chances and that has not happened in the Premier League - just look at that statistic about how few passes Riyad Mahrez has made to him recently.

"Mahrez found Vardy with one ball against Boro, but that was only the second time it had happened in eight league games since 17 September.

"Leicester just need to find a supply line for him again and, if Sunderland take the initiative on Saturday, that could play into the Foxes' hands and let them play balls over the top for Vardy to run on to.

"That is exactly how he got one of the two goals he scored at the Stadium of Light in April. It will be very interesting to see if the Black Cats can deal with his pace this time."

... and will Leicester ever win away?

Shearer and Sutton's Blackburn team did not win an away league game until January in 1995-96, the season after they won the title. After seven defeats and four draws on the road, they ended their wait at the 12th attempt when Shearer's goal gave them a 1-0 win at struggling QPR.

Sutton: "Like Leicester, we made a poor start to our title defence but we turned it around and eventually finished seventh.

"I think Claudio Ranieri's side have too much quality to go down, but it would be particularly damaging if they were to lose again on Saturday.

"Sunderland are still not very convincing going forward but they have got a bit of spirit and fight about them and their players and fans will think they have got a real chance of winning this game." 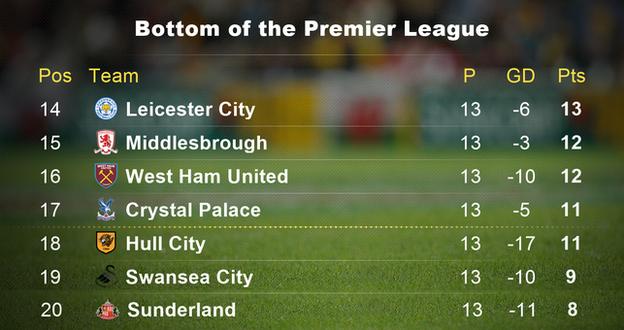 Shearer: "Although Sunderland were beaten in their last outing at Anfield their two wins before that, against Bournemouth and Hull, suggest they can cause Leicester problems at home, particularly with Jermain Defoe and Victor Anichebe starting to form some kind of understanding and threat as a pairing.

"I didn't have to work at it with Chris at Blackburn. It has taken them a bit longer but Defoe has always functioned best with a big man playing alongside him and it seems like he and Anichebe are building on that.

"This is a big game for Leicester. To perform so well in their first season in the Champions League is another fantastic achievement when we see so many other sides take time to adjust.

"But they now have to apply the same focus and determination to get results in the Premier league or they will be back in a relegation battle, like they were in the 2014-15 season."

Is Alan Pardew running out of time at Palace?

Shearer: "Alan Pardew is about to find out if his players want him in the job or not. They cannot defend in their next two games like they have done recently or he won't be their manager for much longer.

"As well as losing their last six league games, Crystal Palace have gone 18 games without a clean sheet, which tells you what has gone wrong for them.

"Why are they conceding so many goals? Well, Christian Benteke was at fault on more than occasion against Swansea last week and did the same against Manchester City the week before. Clearly sides have spotted his weaknesses at defensive set-pieces.

"At Newcastle, Sir Bobby Robson always used to say 'there is always one dope who falls asleep' in those situations and as players you target that.

"So what Palace need to do is put Benteke in the middle of the goal, on the six-yard box and take the responsibility away of marking someone. Just tell him to attack the ball.

"Palace have the advantage that they are at home and face a Southampton side who will have played last Sunday and on Wednesday in the EFL Cup too.

"Saints could be suffering from their European and midweek exertions and Palace have to get a win because they have a tricky run of fixtures ahead of them.

Sutton: "Pardew has got a strong relationship with Palace chairman Steve Parish but things are looking ominous for him - he clearly cannot keep losing games.

"I saw after the Swansea game that Phil Neville had said the players had let Pardew down, but this is a guy who has spent almost £75m in his two years in charge.

"If you are the Palace owners, over in the United States, then you must be thinking we should be doing much better than we are.

"This is almost a must-win game for Pardew, and it will be the same against Hull too."

Should Man Utd unleash Ibrahimovic and Rashford up front?

Shearer: "Having watched United in the last three or four league games, they are creating chances.

"But if their strikers don't start taking them, then Jose Mourinho will have to look at bringing someone in during the January transfer window - you can only give your forwards so many chances.

"Wayne Rooney isn't the striker he was. Zlatan is scoring but you can't rely on a 35-year-old all season.

"There have been calls to give Marcus Rashford a go down the middle but when he was put through the middle against West Ham last weekend, he snatched at it.

"He's young, his time will come but at the moment I wouldn't put him in on current form.

"Anthony Martial has also also not been firing in the Premier League and has looked uninterested at times but he got two goals against the Hammers in Wednesday's EFL Cup win. Maybe that might give him a bit of confidence he desperately needs."

Sutton: "United's biggest problem at the moment is their manager, and the way he is behaving.

"I thought they were unfortunate not to beat Arsenal on 19 November but they were still not convincing against West Ham in the league and we are still waiting - and waiting - for them to turn the corner.

"Some people think they can still win the league but I am not one of them. They are not title contenders at all.

"It does not matter if you are playing with a single striker or a partnership up front, you have to find a way of creating chances.

"That is actually more of a problem for Everton than United at the moment, although neither team have scored many goals.

"Playing with two strikers is not necessarily the answer to that but, for United, Ibrahimovic is not going to run away from defenders any more.

"However United play, they need to get bodies around him because he is clever with his touches and his link-up play, but he can appear isolated.

"When United play him up front on his own, you notice his lack of pace. They have to get that from someone else who can stretch the game - otherwise, you become predictable."

Why are strike partnerships becoming a dying breed?

Shearer: "With more sides playing a three-man attack, you do see fewer partnerships than we maybe saw when I was playing with Chris at Blackburn, Les Ferdinand at Newcastle or Teddy Sheringham with England.

"But in all those sides it wasn't a case of playing two out-and-out strikers - we were always able to drop in and help the midfield when we didn't have the ball.

Sutton: "If Alan and I were playing together in the Premier League now, we could have done some damage and I will tell you why.

"As he says, people would say we played a 4-4-2 the season we won the title but actually, out of possession, one of us would drop on to their holding midfielder.

"The game has not been reinvented - you can still play with two strikers. It is no big deal, just about players being adaptable.

"It suited me as a player because I liked to have people who were clever and quick to play off me. Is there still a place for it? Absolutely."