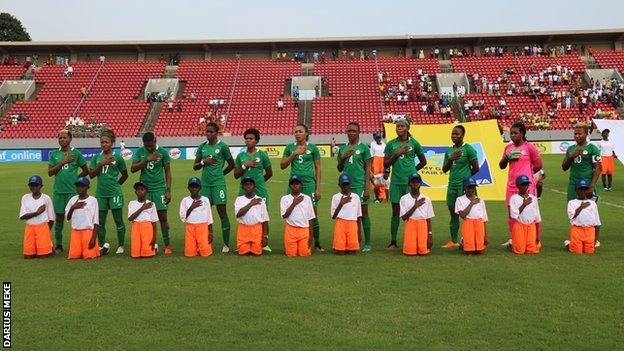 Nigeria's women's team say they are fighting for their rights as they continue a sit-in protest at a hotel in Abuja over outstanding payments.

The Super Falcons have yet to receive allowances and bonuses for winning the Women's Africa Cup of Nations on Saturday 3 December.

The Super Falcons clinched their eighth African title with a 1-0 win over hosts Cameroon and are unhappy that the Nigeria Football Federation has failed to pay them US$17,150 per player for their success.

It is alleged the NFF had also pledged to pay outstanding allowances for qualifying and their win bonuses [US$6,500] before the start of the competition.

On Friday, Nigeria and Arsenal forward Asisat Oshoala told BBC Sport: "This is a fight about the welfare of the team. It's about the way the team has been handled over the years.

"We are champions. We went out to fight for the nation even without being paid - not everything is about money but of course it is an issue.

"We went to the tournament to play for our country and we won the trophy - it is our job and we make no excuses but are not made to feel like champions.

"We don't feel like the Super Falcons of Nigeria, we don't have a feeling of seniority - we are being treated like we are age-group players, like the Under-17s and the Under-20s."

On Tuesday, one of the players told BBC Sport that their sit-in at the Agura hotel in the capital will not end until they receive all bonuses, which totals US$23,650 per player.

"We are not leaving this hotel and we have not been told exactly when we are going to get paid," the player, who insisted on anonymity, told BBC Sport.

"The plan is to stay here until we all receive the money because the moment we leave there will be no opportunity to get it again."

"We are tired of the lies and false promises from the NFF," one player, who insisted on anonymity, told BBC Sport.

"They told us we would be paid before the tournament in Cameroon, but that never happened.

"We continued playing and now we are owed additional allowances and bonuses for winning the competition itself.

"We have made it clear to the NFF president and general secretary that we are going nowhere until all our monies from the qualifying and the competition in Cameroon have been paid."

The NFF, which receives direct funding from government, is in dire straits after Nigeria slipped into recession in August for the first time in more than a decade.

Since March, Super Falcons coach Florence Omagbemi and her assistants have only received a month's salary.

The NFF has said in a statement that its general secretary Mohammed Sanusi met with the players and officials at the Agura Hotel on Tuesday.

"The NFF is not happy owing players and coaches, but present severe economic challenges inform that it can only continue to seek the understanding of these persons, as well as hoteliers, travel agents, management and staff until the situation improves," Sanusi said in a statement.

"All organisations, whether government or private, are feeling the pinch.

"We know we have financial commitment to you (players and officials of Super Falcons) and we have not at any time stated otherwise. But the money is not readily available.

"We will pay you all monies you are being owed as soon as we receive same from the government."

Despite this latest appeal by the NFF, the Super Falcons insist that they do not trust the federation's promises and will not be calling off their sit-in protest as requested.

"Contrary to what was said in that statement, Mr Sanusi used some strong words during our meeting," another player told the BBC.

"Our coach (Omagbemi) has gone unpaid for months, she lost her father yet she went to the tournament and won it for Nigeria.

"They can't treat the Super Eagles (the men's national team) like this. The only thing we understand right now is for them to pay and stop making promises."

It is not the first time the Super Falcons and the NFF have clashed over unpaid bonuses and allowances.

Twelve years ago, the team remained in their hotel in South Africa for three days after the Nigeria FA (NFA) failed to pay their bonuses for winning the 2004 African Women's Championship.

Pay rows have often surrounded Nigerian teams, with coaches not paid regularly, while players have boycotted training during important qualifiers or at major tournaments over unpaid bonus.

The poor financial position of the NFF has already forced the country to cut their backroom staff and slashed the salaries and allowances of the various national team coaches, excluding new Super Eagles manager Gernot Rohr.