Chinese football is once again set to flex its financial muscle with the recruitment of another worldwide football star.

The eye-watering £60m Shanghai SIPG are reported to be spending on Chelsea's Brazil midfielder Oscar follows a recent trend:

Oscar is expected to become the third-highest earner in the sport - receiving an estimated £400,000 a week - although that status might be short-lived with reports of other high-profile names set to follow when the pre-season transfer window opens in January.

With that in mind, let's take a look at how China's spending might again send shockwaves around world football.

What are clubs likely to spend?

It is hard to say at this stage - but huge fees and staggering salaries have been bandied about.

The big spenders over the past two seasons have been Shanghai SIPG, Jiangsu Suning, champions Guangzhou Evergrande Taobao and Shanghai Shenhua. Nine of the most expensive signings in Chinese club football were made by that quartet.

So aside from Oscar, who else might be lured before the 2017 Super League campaign begins in March?

There are strong rumours that Shanghai Shenhua - managed by former Sunderland boss Gus Poyet - are set to sign former Manchester United and Manchester City forward Carlos Tevez from Boca Juniors in a deal that would reportedly earn the Argentina international £31.5m a year - an astonishing weekly wage of £605,000.

It is also rumoured that the club also want Argentina midfielder Javier Pastore from the French champions.

Marlon Harewood, who played for Guangzhou R&F in 2011, on BBC Radio 5 live

My experience was amazing. The team I was with looked after me very well.

There is a lot of money in China. They've seen the Premier League and want to bring that to their country. The way to do that is bring in the best.

The standard of football is high. They have great quality players.

The wage Oscar will be getting is phenomenal.

When does window open and close?

The next transfer window opens on 1 January and closes on 28 February. 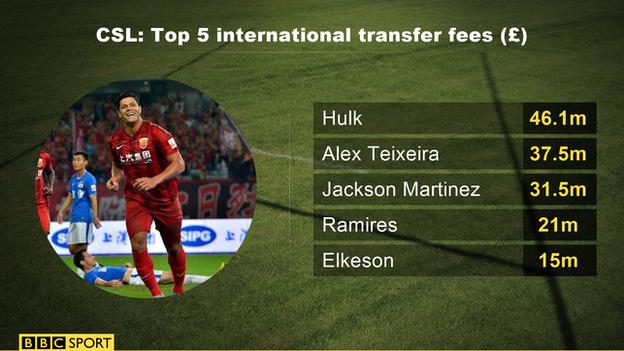 Chinese Super League clubs spent £200m before the start of the 2016 campaign.

However, the fee for Teixeira was eclipsed by the £46.1m (55.8m euros) paid by Shanghai SIPG for Zenit St Petersburg's Brazil forward Hulk during the mid-season summer window.

Why so much money?

As we speculate how much could be spent, it is worth a recap of why clubs have so much money to spend.

After two failed attempts to start a football revolution in recent years, it looks like this one has legs because it has the full backing of President Xi Jinping - a big football fan.

The government wants China to be a "world football superpower" by 2050 and aims to develop a national team capable of winning the World Cup. They are ranked 83rd in the world at the moment.

A strong domestic league would help, in part, to realise these targets, so China has encouraged big businesses to essentially bankroll the domestic clubs. The chart above shows what types of companies are backing the 16 Chinese Super League clubs.

Companies have also been encouraged to invest abroad with Manchester City, West Brom and Aston Villa among the English clubs to have received money from the country over the past year.

And in November, it was reported that Chinese video streaming service PPTV was set to pay $700m (£560m) for Premier League rights - the English top flight's biggest overseas broadcast sale.

If the reported value is confirmed, it would be worth 10 times more than the league's existing China TV deal.