Wayne Rooney became Manchester United's joint all-time leading scorer as the holders cruised into the FA Cup fourth round with victory over Reading.

Rooney registered his 249th United goal inside 10 minutes to match the 44-year-old record of Sir Bobby Charlton, who was there to witness the moment.

Anthony Martial added a crisp second as the hosts bossed the first half.

Marcus Rashford added the third before doubling his tally after a horrible error by Reading keeper Ali Al-Habsi.

The occasion marked an unhappy Old Trafford return for Reading boss and former United defender Jaap Stam, whose team may be flying high in third place in the Championship but were outclassed from the first whistle.

For United, this was their eighth win in a row in all competitions and another confidence-booster before Tuesday's EFL Cup semi-final first leg against Hull.

Knee-sy does it for Rooney 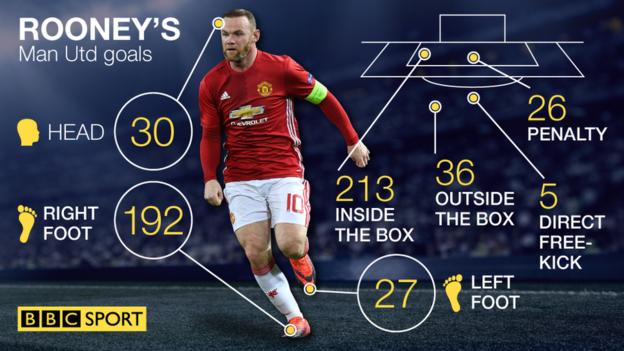 Rooney has undoubtedly scored more attractive goals for United in his 543 games for the club since arriving from Everton in a £27m in 2004 - but few have carried as much significance.

With just seven minutes on the clock the United skipper improvised cleverly to get his right knee to Juan Mata's lofted pass to guide the ball beyond Al-Habsi in the Reading goal.

Rooney's landmark strike arrived 215 matches and four seasons quicker than Charlton's 249th, which came in a 2-0 victory over Southampton in March 1973.

Rooney rightly lapped up the adulation of the home crowd but the contribution of Martial to the goal should not be overlooked, the young Frenchman bursting between two defenders down the left to tee up Mata for the assist.

Martial added United's second after 15 minutes and again Rooney was involved, playing the go-between in a one-two that resulted in the 21-year-old advancing unchallenged before curling in a lovely finish.

United could and should have been out of sight by the interval, with Rashford going close on three occasions - one of those a missed open goal, albeit from a tight angle.

In total United mustered 18 shots in the opening 45 minutes, their highest total in the first half of a match under manager Jose Mourinho.

The one-way traffic continued after the break with Mata firing wide and Rooney going agonisingly close to a historic 250th United goal when his close-range follow-up hit the leg of the sprawling Al-Habsi.

But the further goals their performance deserved finally came when Michael Carrick prised open the Reading defence with a precise pass for Rashford, who finished confidently for his first goal in 18 games.

And it was four moments later when Al-Habsi suffered a nightmare moment, fluffing his attempted clearance after nudging the ball with his standing leg and allowing Rashford in to blast home from just inches out.

As Old Trafford celebrated the occasion, the stadium announcer made sure he remembered the 'other' player: 'Manchester United's goalscorer, and equalling Sir Bobby Charlton's record of 249...'

Up in the directors' box, blinking through his glasses under a dark, brimmed hat, Charlton looked down. Wife Norma sat alongside, applauding generously.

At 79, Charlton was not on his feet like others around him as the ball lobbed in off Rooney's right knee. But close by, Sir Alex Ferguson, who paid £27m to buy the then 18-year-old striker from Everton in 2004, was up and applauding.

The genuine enthusiasm and warmth around the stadium as Rooney celebrated the landmark was an acknowledgement of what he has achieved.

Over the space of 4,484 days since that blistering debut hat-trick against Fenerbahce, through good times and bad, personal highs and lows, major trophies and disappointing defeats, Rooney has kept scoring.

More than Ryan Giggs. More than Mark Hughes. More than twice as many as Cristiano Ronaldo, who is still regarded with such affection. Past Denis Law, past George Best, now level Charlton.

There is still another goal to go before he gets the record on his own, which probably explains why there was no salute from Rooney as the TV camera headed for him at the final whistle.

The club captain still has one more small step to take.

'It is an honour' - match reaction

Rooney, speaking to BT Sport: "To do it at such a massive club like Manchester United, I am hugely honoured and it is really proud moment for me.

"It was not something I could have imagined. You don't think that far ahead, but I have been at this club a long time, it is a huge part of my life and it is an honour to be up there alongside Sir Bobby.

"You want to do records in front of your home fans and we have got two home games coming up and hopefully I can get the next one in one of those."

Manchester United boss Mourinho, speaking to BT Sport: "I am happy because it was a professional job from minute one. We knew Reading could create difficulties, especially if you allow them to settle in the game.

"It is also good for me to see some of the players that are not starting in many games - they are good physically and I can count on them for the rest of the season.

On Rooney matching Charlton's club record: "A more special day will arrive. It was great but I want one more goal. He is an amazing guy in the group and we all want him to do that. To have Wayne as the top scorer in a club like this is magnificent for him."

Reading manager Stam: "It is certainly a lesson for my team. You have got to start aggressively against a team like this, otherwise they will make you pay.

"We started better in the second half possession-wise, but we do not create many chances."

United are back in action at Old Trafford on Tuesday night for the first leg of their EFL Cup semi-final tie against fellow Premier League side Hull City (20:00 GMT), while Reading's next assignment is a home Championship fixture against QPR on Thursday (20:00 GMT).