Ronaldo also won the Ballon d'Or in December, with both honours recognition for success in the Champions League with Real and Euro 2016 with Portugal.

Carli Lloyd of the United States was named the world's best female player.

Hold on... haven't we already had the Ballon d'Or?

We have - but this is different.

For the past six years, the world's best player has received the Fifa Ballon d'Or award.

A version of that prize has been awarded by France Football magazine since 1956, but last year world football's governing body ended its association with that honour.

Instead, it introduced the Best Fifa Football Awards, with Ronaldo the first recipient of its main prize.

Voting for the player and coach categories was by national team captains and managers, selected journalists and, for the first time, an online poll of fans.

Each counted for 25% of the points.

As well as scoring the decisive penalty in the shootout to win the Champions League, rescuing Real with a hat-trick in the final of the Club World Cup, captaining Portugal to Euro 2016 glory and being recognised with a fourth Ballon d'Or, he now has something Messi does not - the honour of being named best Fifa men's player.

The former Manchester United forward had been the favourite for the award, following a year in which he continued to deliver remarkable statistics. These included:

"It was my best year so far," said Ronaldo. "The trophy for Portugal was amazing. I was so happy and of course I cannot forget the Champions League and the Club World Cup. We ended the year in the best way. I'm so glad to win a lot of trophies, collective and individual. I'm so, so proud."

Ronaldo and Messi have a history of not voting for each other for major awards and they continued that habit, both filling their top three with club-mates.

Despite being on the shortlist for best individual player, Griezmann did not make the best XI.

The line-up features five players from Real Madrid, four from Barcelona, one from Juventus (Dani Alves, who was at Barca for the first half of 2016) and one, Manuel Neuer, from Bayern Munich.

That means no Premier League players were included. 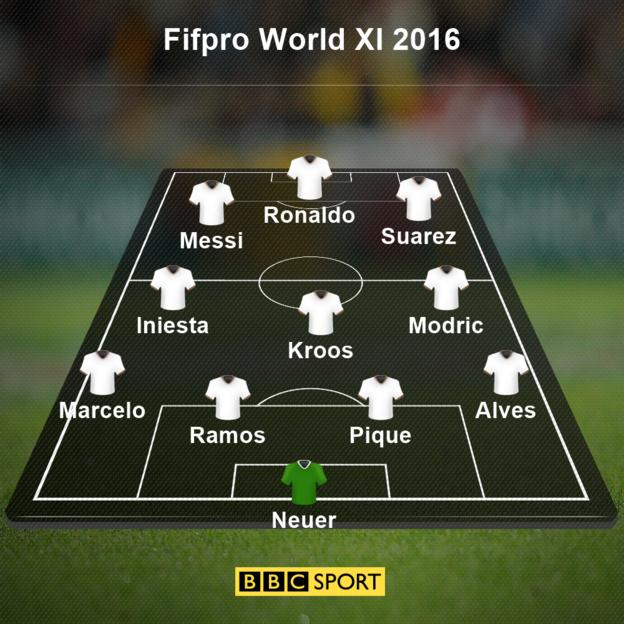 Despite the United States failing to finish on an Olympic podium for the first time, co-captain Carli Lloyd has continued her exceptional form both for her club, Houston Dash, and country.

"I honestly was not expecting this," said Lloyd. "I know Melanie did fantastic in the 2016 Olympics."

From 5,000-1 outsiders to Premier League champions.

Leicester City manager Claudio Ranieri, who has also led his side to the last 16 of the Champions League this season, won the award ahead of Real Madrid's Zinedine Zidane, who lifted the Champions League in his first season in charge, and Portugal's Fernando Santos, who led his team to an unexpected success at Euro 2016.

Germany's Silvia Neid retired in 2016 after capping an 11-year spell in charge of the national team by guiding them to Olympic gold for the first time.

Success in Rio added to her extensive trophy collection, which includes the World Cup and two European Championships.

The best goal of 2016 was, officially, scored by Penang's Mohd Faiz Subri.

It came in the Malaysia Super League, the forward converting a superb, swirling free-kick from 35 yards which started out heading towards the top left corner but ended up in the top right.

The fan award went to supporters of Liverpool and German club Borussia Dortmund, who together sang a moving rendition of 'You'll Never Walk Alone' - an anthem adopted by both teams - before their Europa League quarter-final in April. The match came the day before the 27th anniversary of the Hillsborough disaster, in which 96 Liverpool fans died.

Liverpool went on to produce a stirring display, coming from behind to win the match 4-3 and advance to the semi-finals 5-4 on aggregate.

Colombian side Atletico Nacional were given the fair play award for their part in the aftermath of the plane crash which killed 19 players and staff of Brazilian side Chapecoense.

Chapecoense were en route to play the first leg of their Copa Sudamericana final when the plane crashed, killing 71 people.

Atletico Nacional said the title should be awarded to Chapecoense. Fifa recognised their "spirit of peace, understanding and fair play".