When I look at what is going wrong for Liverpool at the moment, a lot of it stems from the engine room of the team - the midfield.

The biggest problem I have there is with Jordan Henderson and Emre Can playing together in the Reds' 4-3-3 formation.

They both play too many sideways balls, which are pretty looking and keep possession - but do not hurt the opposition.

Don't get me wrong, I think Henderson has had a good season, while Can is not in particularly poor form - he has just had an average season. It happens.

But, together, they do not fit in with the way Liverpool have to play to open teams up, which is one of the reasons the goals have dried up for Jurgen Klopp's side recently.

'Too many touches give teams time to regroup'

I have heard it suggested recently that Liverpool need a midfield general - a new Steven Gerrard, if you like.

That would be fantastic, obviously, but it's unlikely to happen in the summer. There are not many players around who can do everything in defence and attack, like Gerrard could, and if you find one then he is going to be very expensive.

What I think they need, and also have a more realistic chance of getting, is a player who compliments the ones they have already got, but can do the things that Henderson or Can cannot - which is control the tempo the team plays at.

Rather than look for someone who can do it all, they actually need a player with more creativity to play alongside either Henderson or Can - and, at the moment, I would choose Henderson out of those two.

Henderson covers the ground effectively and protects his back four, but I would like to see someone in there next to him with a little bit more guile on the ball, to use it more effectively.

I am talking about a midfield player whose first touch is always to get the ball out of his feet and then be looking to play it forward if the pass is on.

It's a job Michael Carrick does so well for Manchester United. He does not look to bomb on himself, but he has the nous to play the right ball.

At the moment, Henderson and Can get the ball and they get rid of it straight away. Sometimes they pass it forward, but a lot of the time it goes sideways.

It is too safe, and it means the team moves the ball too slowly and often takes too many touches as well.

That gives the opposition time to regroup and get organised, which is why they are not bothered when Liverpool dominate possession.

'Too predictable, too narrow and too nice'

Some of Liverpool's other issues are pretty obvious - they are not good enough defensively to buy themselves enough time in games when they are not playing well.

Up front, Daniel Sturridge does not fit into this team. He is not the answer, so I think it is time to get rid of him.

There are some positives, though. The collapse in Liverpool's form in 2017 is certainly not down to the attitude of their players.

I don't think it is down to them being tired either, and I have watched most of their games this year.

I would question their style of play at the moment, though. It is too predictable, too narrow and too nice.

Liverpool always play in the same 4-3-3 formation, and the opposition are ready for it. They know they will be up against fast, tricky forwards who try to cut inside.

I would describe their attacking play as being like a funnel, with everything being channelled centrally.

Every other team know that, and are putting numbers there, then continuing to send Liverpool's players inside.

They know Liverpool are not going to change and play balls up to a big striker, they are just going to keep trying to get into the last third of the pitch and, when they are there, try one-twos or clever flicks.

An easy way of stopping that is by having plenty of men back and, at the moment, Liverpool do not have the nous to break down anyone who does it.

Top four still a target now the title has gone 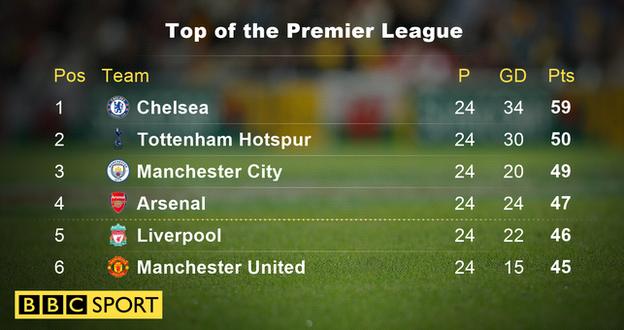 The problems Liverpool have got at the moment are part of the reason I think they are better off playing against the other top teams.

As I have mentioned in my weekly predictions, on Saturday, Tottenham will be one of the few teams in the last few weeks to come to Anfield and not just sit in a 4-5-1 formation with all their men in their own half.

Spurs are good defensively and well organised full-stop, but their full-backs will bomb on and that will give Liverpool some space to work with, especially on the counter-attack.

So the fact that Klopp's side also have to play Arsenal and Manchester City in their upcoming fixtures is not a bad thing. Those teams will also be open, and they will let Liverpool play.

Liverpool will be back - as in they will rediscover their form - but it might take the kind of gladiatorial atmosphere you get in games against the other leading teams to bring out the best in them again.

It is disappointing that their title hopes have disappeared now, of course, but you have to remember that their target at the start of the season was a top-four finish for the first time since 2014.

Expectations were raised by that purple patch before Christmas, when it looked like they would be Chelsea's closest challengers. That is no longer the case, clearly.

But they still have a good chance of securing Champions League football and, if they achieve that, then they will still have had a good season.