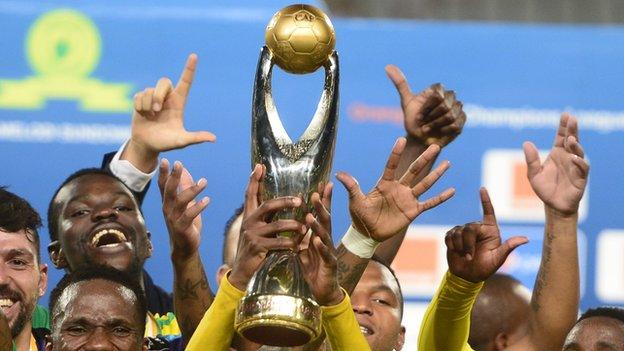 St George of Ethiopia became the final team to reach the African Champions League Round of 32 when beating Cote d'Or of the Seychelles 3-0 on Monday.

The three goals were actually scored on Sunday but play was abandoned after 55 minutes because of a waterlogged pitch.

The final 35 minutes took place on Monday with no further scoring as St George wrapped up a 5-0 aggregate win.

They will now meet Congo's AC Leopards in the next round in March.

The shock of the round came on Sunday as Port Louis of Mauritius eliminated Kenyan side Tusker.

It is only the second time in 15 attempts that a club from Mauritius has reached the final qualifying round of African club football's premier competition.

With this year's Champions League featuring four groups of four for the first time - an increase on the two groups of four in recent years - teams are now just 180 minutes from the more lucrative group stages.

Any side that reaches the group phase will earn a minimum of $550,000 in prize money.

Ports Authority of the Gambia are another side looking to get there, after forcing a 0-0 draw with Sewe Sport to upset the Ivorians as 1-0 aggregate winners.

No Gambian club has ever reached the group stage of the African Champions League.

Next month's Round of 32 will feature defending champions Mamelodi Sundowns of South Africa, who lifted the African Super Cup for the first time on Saturday after beating TP Mazembe.

Mazembe are among the other sides to enter the Round of 32 on a bye, alongside - among others - Egyptian duo Al Ahly and Zamalek and Tunisians Esperance and Etoile du Sahel.