If George Williams had been a bus driver in Milton Keynes, he would have had to cope with 124 roundabouts.

It is perhaps not surprising then, that as a footballer, his career has come full circle, and seen him handed a return ticket back to MK Dons, the club that showed him the door as a teenager.

The odds were stacked high against Williams.

According to League Football Education, 99% of the apprentices at EFL clubs released over the past five years have not gone on to have a career in professional football.

So you can imagine how Williams felt in 2012 when he was told by then Dons boss Karl Robinson that he could leave the club he had been at since under-14 level.

"I remember the whole day and how it unfolded," he told BBC Three Counties Radio. "I was quietly confident I may get a professional contract or some other kind of deal because I felt like I was playing quite well.

"When I found out I wasn't getting one, I was absolutely gutted. I remember calling my dad and I was really down about it."

Unlike some academy dropouts, Williams, now 23, had a back-up plan if his football career hit a bump, and had already been offered a place at four universities.

"You're one of thousands with the same CV - 18 years old, played no professional games and been released," he said.

"I knew going on trials probably wasn't going to be the best for me. I was very aware a manager isn't going to look at an 18-year-old with no league football and say 'get him in'. Managers look for experience." 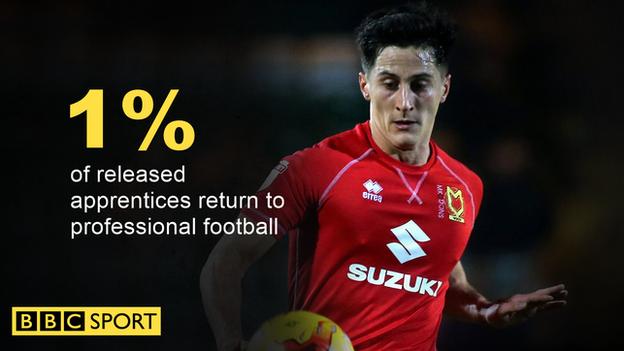 After a coffee shop meeting with his parents, during which options including going to the United States were thrown into the mix, Williams decided on Loughborough University.

Loughborough often take on young footballers coming out of academies, generally from League One and below, and give them a chance to rebuild their career, while also furthering their education.

"I remember meeting the head coach Stuart McLaren before getting to university and it was almost like a professional club set-up," said Williams.

"They had a new stadium being built, there was training pretty much every day, they were in both the Midlands Alliance and a university league, so it was kind of like being back in full-time football again."

McLaren remembers the day Williams first arrived on the scene, during pre-season.

"You could see that George had something extra about him," he told BBC Sport.

"He was very strong, very quick, had exceptional stamina, but also in terms of his personality, it's not easy for young guys to deal with the rejection that comes with not being offered a professional contract.

"Sometimes the bigger job in the higher education sector is to build people up from the psychological perspective rather than technical or tactical development.

"But George wasn't like that at all. You could see he had taken it in his stride and that he was going to make the most of his time at university.

"All we did was facilitate and guide George through the process. Anything he's gone onto achieve is almost entirely down to himself."

McLaren now works in a grassroots development role with the Scottish Football Association, and met current MK Dons boss Robbie Neilson, who took over from Robinson earlier this season, while they were studying for Uefa coaching badges.

"I told him to keep an eye out for the boy Williams, he won't let you down," he said.

"I'm delighted that George has backed up that recommendation. He's been performing quite well of the last couple of months."

Williams never gave up hope that he would get back into the full-time game while studying for his Sports Science degree, despite telling people he would "see what the degree can get me if that (football) doesn't work out".

The move back into club football

After playing for and captaining the university side for two years, Williams joined National League North side Worcester City while in his final year at Loughborough.

And he was a member of the side which created club history by beating League One Coventry City in the FA Cup first round and causing pandemonium at the Ricoh Arena.

Despite being knocked out in the next round by Scunthorpe United after a breathless replay and record-breaking 14-13 penalty shoot-out, Williams' stock was high.

"I think that FA Cup run gave managers that might have been interested a chance to see me against League One opposition," he recalled.

"The Scunthorpe game was on a Wednesday, I got a call for Barnsley on the Thursday and signed for them on Monday."

But more adversity was to follow as Danny Wilson, the manager who signed him for Barnsley in January 2015, was sacked within a few weeks of his arrival and he did not fit into new boss Lee Johnson's plans.

Williams finished off his degree but was not involved in Barnsley's pre-season trip in the summer of 2015, and was sent out on loan to National League side Barrow.

There was, however, light at the end of the tunnel after he returned to Oakwell.

"Lee Johnson played me at left-back in a reserve game because there was a lot of injuries there," said Williams.

"Then I started the next game, put my foot down in the team and didn't look back."

He went on to help Barnsley lift two trophies at Wembley, winning the Johnstone's Paint Trophy final and earning promotion to the Championship with a play-off win over Millwall.

Despite that, he was released by the Tykes during the summer and decided to seek a move back down south.

He had offers from other League One clubs, but his mind was quickly made up when he heard of interest from the manager that had released him four years previously.

"I met Karl, he was really honest with me. There was no bitter feelings or anything, that's the job, this is a business," Williams said.

"Looking back, I probably wasn't ready to get a professional contract when I was 18, and I am now."

Because of his route back into football and the poor prospects for players released by academies, Williams now has his eye on helping those who find themselves in similar situations to him.

"It's something that later in my career I'd want to do, helping 18-year-olds that get released, making sure that they've got a platform to do other things so if football doesn't work out, they have other options," he said.

"And on the flipside, they've got another way to play a good standard of football, rather than not play at all."