Manchester City defender Gael Clichy is likely to be available after a back problem for Wednesday's FA Cup replay.

Vincent Kompany remains unavailable but is close to a return to fitness.

Huddersfield will again be without midfielder Aaron Mooy, who is ineligible against his parent club.

Sean Scannell and Harry Bunn are both back in training and could feature but Nahki Wells is a doubt with an ankle problem, while Christopher Schindler and Kasey Palmer are injured.

Simon Brotherton: "Huddersfield's priority is undoubtedly promotion to the Premier League, but their squad proved strong enough not only to force this replay but also prevent City from scoring.

"That's something only Barcelona, Tottenham, Manchester United, Liverpool and Everton had previously managed this season.

"Manchester City still have an eye on other competitions too, not least the Champions League, but with Chelsea and Manchester United drawn together in the last eight, the FA Cup offers their best chance of a trophy in Pep Guardiola's first season in charge.

"Both teams would surely fancy their chances in a quarter-final tie at Middlesbrough."

WHAT THE MANAGERS SAY

Manchester City manager Pep Guardiola: "Tomorrow is a final. Sometimes the teams at the top of the Championship are better than teams in the Premier League. They are so professional."

Huddersfield head coach David Wagner: "To play this game, with this good run we are on, in a different competition, gives you a special feeling for this game because you can really play with freedom.

"It's an extraordinary occasion, which everybody can be excited about and we should transform this into a good performance." 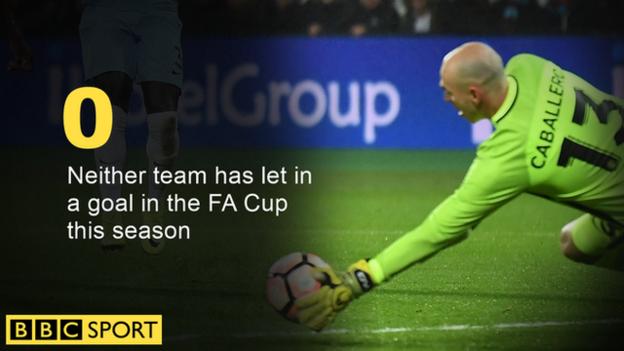