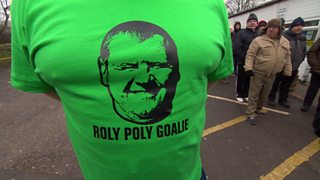 'I was hungry' says pie-eating goalie

Sutton United reserve goalkeeper Wayne Shaw insists he ate a pasty during his team's televised FA cup tie because he "was hungry".

Both the Football Association and Gambling Commission are investigating if betting rules have been broken during his team's loss to Arsenal.

Before the match, a bookmaker offered odds of 8-1 that Shaw would eat a pie on camera during the game.

Speaking to Radio 4's The World at One he insisted it was because he'd missed his meal earlier.