Manchester United have replaced Bayern Munich as the most popular team online in China, according to a new report.

The sixth edition of the Red Card, which analyses the influence of 53 European clubs on China's social media platforms, has Arsenal and Liverpool joint third with Manchester City fifth.

The German Bundesliga remains the most influential league online.

United forward Wayne Rooney, who has been linked with a move to China, also features in the top five, along with Old Trafford team-mate Anthony Martial.

Real's Wales international Gareth Bale is third, but Lionel Messi is a notable absentee. The Barcelona forward does not have a social media presence in China.

The study took its data from Chinese social media platforms WeChat and Weibo, the latter a cross between Twitter and Facebook, as well as audience figures from live streams of games and how the respective club websites perform in the country.

David Hornby, head of sport at Mailman which produced the annual report, told BBC Sport: "The Premier League is complacent. Its clubs have decent numbers of followers on Weibo, but not as high engagement.

"The Bundesliga clubs are far more active. The German league tells its clubs what to do, whereas the respective Premier League clubs are in control of what they do."

Regarding United's ascent to the top for the first time since the report began, Hornby said: "There was a gap between following and engagement.

"United were the most followed, but Bayern were a country mile ahead regarding activity online. But United have taken big strides with fan events and a tour last year." 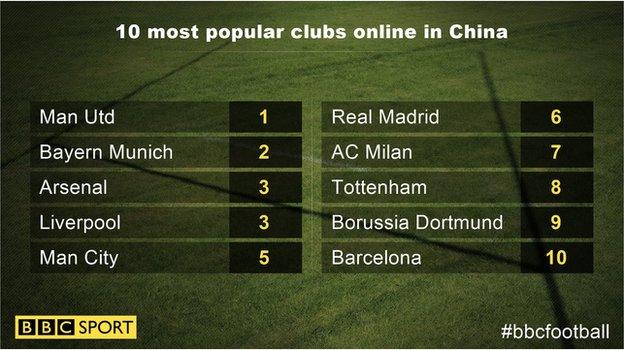