Juventus went 10 points clear at the top of Serie A with a 30th consecutive home win as stubborn 17th-placed Empoli were eventually brushed aside.

Massimiliano Allegri's side, going for a sixth consecutive title, went ahead when Lukasz Skorupski bundled into his own net after Mario Mandzukic's header struck the bar shortly after half-time.

Leonardo Bonucci was restored to the Juve line-up after being left out of Wednesday's Champions League victory at Porto because of a touchline spat with Allegri in the previous Friday's league game.

Bonucci watched the last-16 first leg in Portugal from an executive box, but the Italy centre-back started in Turin in one of six changes, perhaps made with Tuesday's Coppa Italia semi-final first leg with Napoli in mind.

Juve, who are on track to win a third consecutive league and cup double, last dropped points at home in the league in a 1-1 draw with Frosinone in September 2015.

They were last beaten at home in the league on the opening day of the 2015-16 season, by Udinese, and this 30th straight home win adds to the Serie A record they already hold.

Earlier on Saturday, Atalanta beat Napoli 2-0 to move up to fourth, despite having midfielder Frank Kessie sent off for picking up two yellow cards in three minutes with over half an hour still to play.

Atalanta's Bergamo-born 22-year-old defender Mattia Caldara scored both goals, the first bundled in at the far post from a corner, the second on the counter attack after Kessie's red card.

The defeat leaves Napoli in third, 12 points behind Juve, and now three points above Atalanta, who finished 13th last season. 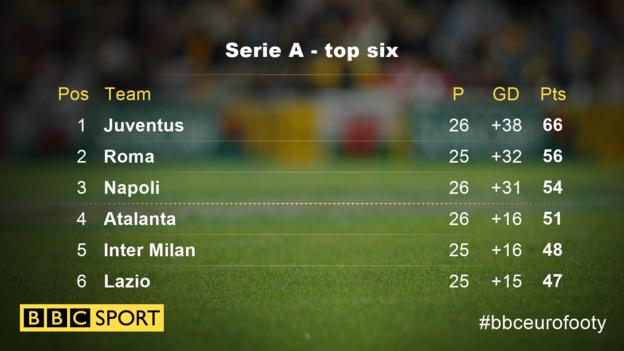