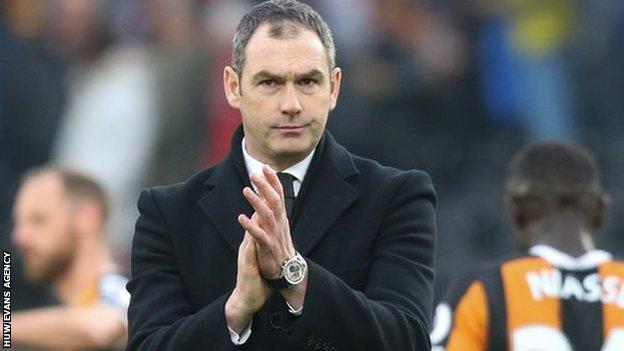 Manager Paul Clement has warned that Swansea City remain in danger of relegation from the Premier League.

A 2-1 defeat at fellow-strugglers Hull has left the Swans once more looking over their shoulders, just three points above the drop zone.

Two goals from Tigers substitute Oumar Niasse were enough to decide the contest, despite a late goal from the visitors' defender Alfie Mawson.

"We're nowhere near safe and we've got a lot of work to do," said Clement.

"Before we went into this game I did not think we were anywhere near safe.

"We are not in a dissimilar position to where we were when we started the game.

"There's still a lot of football to be played. We've 10 games to go, we've got to start playing well again and we've got to bounce back next time against Bournemouth."

Clement admitted his side were hit on Humberside by the loss of defender Angel Rangel and particularly the departure before the break of in-form striker Fernando Llorente.

"He's been a key player for us recently. He gives us a lot of different threats. So that was a loss for us," said Clement.

"But I don't think the injury is serious. He's got a dead-leg. Angel Rangel has an ankle injury.

"The two injuries in the first-half have hurt us. Not necessarily because the players coming on are not good enough, they are good players.

"But what happens in the second-half is that you are limited in what you can do then. Then (Martin) Olsson got injured and we had to play with an injured player."

Clement was critical of his side's defending for the Hull goals and said his side needed to be more clinical at the other end.

"The way we defended was just not good enough on the day," the Swansea boss added. "We have to be disappointed with how they scored and how open we were.

"In recent games we have been much tighter than that.

"For long periods we looked like we had good control of the game, particularly in the first-half. The defensive shape was good, we created good chances on the counter-attack.

"We had a fantastic chance to score with a lovely ball from [Gylfi] Sigurdsson into [Wayne] Routledge - that was a key moment at 0-0.

"Overall, offensively we did some good things without being absolutely clinical."