Middlesbrough have sacked manager Aitor Karanka after three and a half years at the club.

Boro are winless in their last 10 Premier League games and currently sit in the relegation zone, three points from safety with 11 games remaining.

They are also the league's lowest scorers with just 19 goals and were knocked out of the FA Cup by Manchester City last weekend.

"This club will always hold a special place for me," said Karanka, 43.

"I'd like to thank Middlesbrough for a wonderful opportunity and the players, staff and all the people at the club who I have worked with."

The former Real Madrid assistant manager took over at the Riverside in November 2013 to become Middlesbrough's first ever non-British boss.

The club met with Karanka and following discussions, Boro said it was in their "best interests" to make the change.

Boro had a solid start to the season including a 1-1 draw at Manchester City, but their form dipped over the winter and without a win since 17 December, they dropped into the relegation zone on 4 March for the first time.

Karanka has won just 15% of his games in the Premier League, with four wins, 10 draws and 13 defeats. His win rate in the Championship was 52%.

Goals have been hard to come by, despite the £7m signing of Aston Villa striker Rudy Gestede in January and they have scored just three goals in their last 10 league games.

In addition to scoring the fewest goals in the league this season, they have also attempted the fewest shots on target with just 65.

But they do have the joint fifth best defence in the league, better than Arsenal and Liverpool, with only 30 goals conceded.

They have also conceded 31 fewer goals than Swansea, who are in 16th place.

Boro spent over £20m in the summer, as they brought in midfielder Marten de Roon for £12m, along with wingers Adama Traore for £7m and Viktor Fischer for £3.8m.

It was reported that Karanka walked out of the Riverside last March following a row, but returned a few days later.

This season he criticised the board over a lack of January signings and also hit out at the fans' behaviour after a 3-1 defeat by West Ham in January, saying the players deserved more respect.

It has also been reported that he had training ground rows with Stewart Downing and then omitted the former England winger and January signing striker Patrick Bamford from his matchday squad that lost to City on Sunday.

The Boro boss later said he did not pick the pair because he wanted "18 fighters". 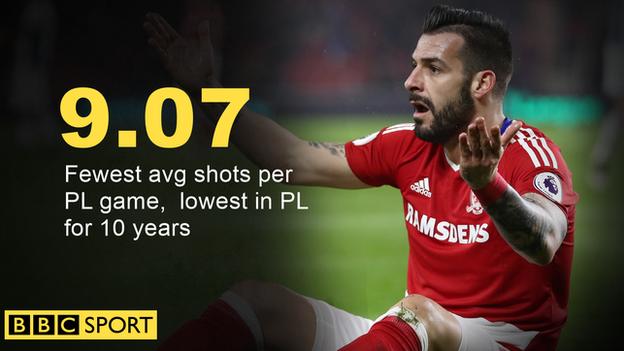 And history is not on their side...

The departure of Aitor Karanka won't come as a massive shock to some Boro fans, many of whom have been calling for change for a number of weeks now.

The same can't be said for Karanka, who just last week declared "I'm not a quitter" to the press, as well as suggesting he had the backing of chairman Steve Gibson.

However, that's not to say the signs weren't there. Just last week BBC Tees Sport learned of a training ground bust-up between Karanka and Stewart Downing, who was frustrated at not being selected for the trip to Stoke.

That was the latest in a long line of fall-outs, from criticising the fans to the board and just last weekend Karanka said Downing, and new signing Patrick Bamford, lacked "fight" after leaving them both out of the match-day squad.

Karanka will always be remembered as the manager who got Boro promotion back to the Premier League after seven years in the wilderness.

However in the end it seems Karanka had lost the dressing room, as well as large section of the supporters, and this time the rifts were too big to mend.