Chelsea's lead at the top of the Premier League was cut to seven points after they suffered a shock home defeat by Crystal Palace and Tottenham beat Burnley.

Antonio Conte's side had won their past 10 league games at Stamford Bridge and had not lost there in any competition since 16 September, but saw that run ended by a battling Eagles side.

The Blues struck first, when Cesc Fabregas turned home Eden Hazard's cross after five minutes, but they were quickly behind.

Wilfried Zaha produced a fine solo finish to turn and fire home from the edge of the box and, 91 seconds later, set up Christian Benteke to put Palace ahead with a delicate dinked effort.

Chelsea piled on the pressure and had 24 shots at goal, their second-highest total in 29 league games this season.

But they could find no way past Eagles keeper Wayne Hennessey, who made 11 saves in total to ensure his side won a fourth successive game.

Chelsea cannot find a way through

The international break cannot have helped Chelsea's rhythm but that did not seem a problem when Hazard, back from a calf injury, and Fabregas combined early on.

Putting Pedro in as right wing-back in place of the absent Victor Moses did not seem to cause the leaders too many issues either, as many of their best attacks came down that flank.

A drop in energy levels might have played a part in places, however. N'Golo Kante, who played 90 minutes for France against Spain in midweek, was noticeably below par in the centre of midfield.

More than 10 minutes of stoppage time was played before the game ended, but Chelsea did not appear any more likely to score and were reduced to hopeful balls into the box as Hazard's influence faded. 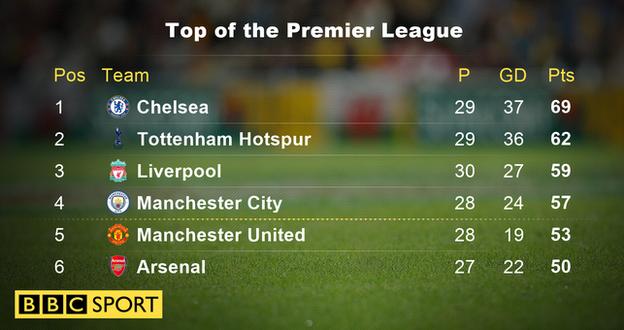 Antonio Conte's side remain in a strong position at the top of the table but, if tiredness was an issue against the Eagles, it could affect them again in the next few days.

Chelsea's lack of European involvement means they are not used to playing in midweek, and only 13 different players have started 22 league games for them since 1 October.

With two games in the next seven days, at home to Manchester City and away at Bournemouth, Conte may have to test the strength in depth of his squad for the first time.

Despite their lack of sparkle, Chelsea's defeat was not down to a lack of chances - but, when they did break down Palace's determined defence, they found Hennessey in inspired form.

His best save was an instinctive stop from Diego Costa in the first half but every facet of the Wales international's game was tested as Chelsea tried to find a way back into the game after going behind.

Hennessey had to move quickly to keep out Marcos Alonso's dangerous cross-shot, dash from his line to prevent Costa from stretching to poke the ball home, and was also tested from distance by Nemanja Matic.

He was helped by his defenders when dealing with the sheer number of crosses from the home side - 35 in total, 12 more than they have previously made in any league game under Conte - but superbly marshalled a back-line that changed twice during the game because of injuries to James Tomkins and then Scott Dann.

'We must accept this result' - what the managers said

Chelsea manager Antonio Conte speaking to Match of the Day: "This is football. We must accept this result.

"We scored our goal after five minutes and then we conceded two in a few minutes. When you concede goals in that way you must understand the situation and improve on these mistakes.

"In every game in England, anything can happen. The league is so strong. We faced a team today with strong players. I think they showed they were a good team.

"Now we have to think about the next game. If we had won we would have been happy but now it's important to focus on Manchester City."

Crystal Palace manager Sam Allardyce: "I think our performance is typical of what seems to be the character of the side. It's the first time we've gone behind so early. The determination has shone through. We knew we were going to be pegged back.

"It's a sweet three points, to come to the champions - or who I think are going to be champions - and win. This is what the Premier League is about. There can be a shock anywhere. It will make people sit up and say wow."

What next? Man City come to Stamford Bridge

Palace remain four points clear of the relegation zone, with a game in hand on third-bottom Hull, and a vastly superior goal difference. They are on the road again in midweek, and travel to Southampton on Wednesday (19:45 BST).

Chelsea have a chance to make immediate amends on home turf when they host Manchester City on the same night (20:00). 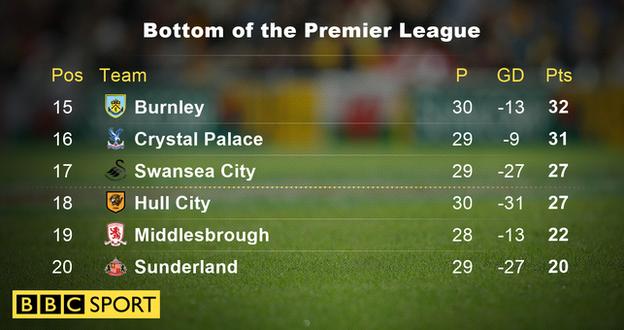 Allardyce beats Chelsea again - the stats you need to know