Chris Wood scored a stoppage-time equaliser to earn play-off chasing Leeds a point at second-placed Newcastle in the Championship.

Leeds were completely outplayed by the hosts at a sold-out St James' Park, before Wood tucked home Kemar Roofe's cross in the 95th minute.

Jamaal Lascelles had put Newcastle ahead midway through the second half as his header crept over the line.

Rob Green made several saves to keep Newcastle at bay, before Wood's strike.

It was the New Zealander's 25th Championship goal of the season.

Newcastle manager Rafael Benitez looked bemused at full-time as to how his team had thrown away two points in a match they totally dominated.

The Magpies still hold an eight-point advantage over Huddersfield in third and need eight points from their remaining four fixtures to seal an immediate return to the Premier League after relegation last season.

Leeds move up to fourth, but are only three points ahead of Fulham in seventh in the race for the play-offs.

The only scare the visitors had offered before Wood's leveller came early on, when Alfonso Pedraza's strike from the edge of the area bounced off the bar. 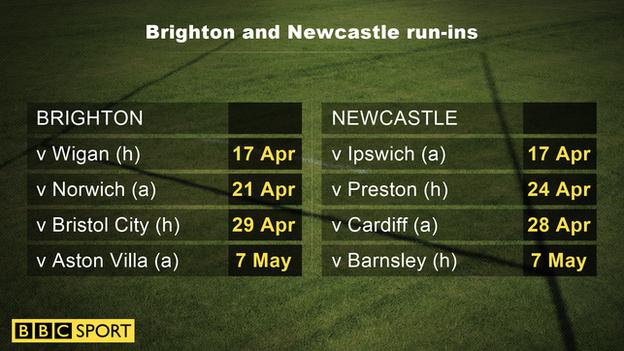 For the remaining 80 minutes Newcastle were camped in Leeds' half, with the instrumental Jonjo Shelvey and Matt Ritchie whipping in a succession of dangerous crosses and corners.

"I am pleased with the performance of the team, the commitment, the passion, the effort but I am disappointed because we make a mistake at the end - at the end, I mean 95 minutes.

"I don't understand a lot of things from the last few games but we have to be proud of the effort.

"We have to keep winning our games and that's it. The priority is to go up and we have to win games if we want to do that."

"We showed what a spirit we have, the determination not to give up until the end and that is what brought the goal.

"We got the point that we are happy with, but I am really proud of the players - they never gave up.

"What an amazing mentality they have created. We have played better but you need both. You need the mentality, the spirit but also the quality and we were able to show that quality in that single moment, which was important and sometimes that is all it takes."