Championship leaders Brighton were promoted to the Premier League after they beat relegation-threatened Wigan, and Huddersfield then drew at Derby.

Brighton had to wait on the result of the 17:00 BST kick-off at Pride Park, before their return to the top flight after 34 years was confirmed.

Glenn Murray's crisp strike from the edge of the area put Albion ahead.

Solly March slotted in a second after the break, before Nick Powell's header made it a nervy final five minutes.

Brighton can now start preparing for life in the top division again following their relegation in 1982-83 and subsequent journey down and back up the leagues.

A Huddersfield win would have meant the Seagulls needed one more point to mathematically guarantee promotion, but their goal difference was already far superior to the Terriers.

Brighton need three more points to clinch the Championship title and will be crowned champions if they win at Norwich on Friday.

Wigan put up a spirited defensive display at the Amex Stadium, but offered little going forward until Powell's goal, and now face the prospect of an immediate return to League One.

They are five points from safety with three to play, including games against play-off chasing Reading and Leeds.

Why are the Seagulls soaring?

Brighton missed out on automatic promotion on the final day last season, when a draw at Middlesbrough saw Boro go up with Burnley and Albion finish third on goal difference.

They then lost in the play-off semi-finals to Sheffield Wednesday.

But Chris Hughton's side have bounced back superbly this campaign, winning 28 of their 43 matches, including all five games in April so far and bettering last year's total of 89 points already.

They could have beaten Wigan by an even bigger margin, but Murray saw his header ruled out and the Championship's Player of the Year, Knockaert, had a goal chalked out for offside and a strike cleared off the line.

What a difference 20 years makes

Brighton's promotion party comes almost 20 years to the day since they were less than 30 minutes from dropping out of the Football League.

Trailing Hereford 1-0 on the final day of the 1996-97 season and needing a draw to survive, substitute Robbie Reinelt popped up in the 62nd minute to score an equaliser, Brighton held on and Hereford went down instead.

Steve Gritt, who had taken charge five months earlier with Brighton 11 points adrift at the bottom of the fourth tier, said afterwards: "It's not something I really want to go through again." They never have.

However, the club was still in turmoil off the pitch in 1997. They had to sell the Goldstone Ground to pay off some of their debts, spent two seasons 70 miles away at Gillingham's Priestfield Stadium, and then moved into the Withdean Stadium in 1999 - a council-owned athletics track on the suburbs of Brighton.

Chairman Tony Bloom's arrival eight years ago paved the way for their new permanent home and the success that followed, but it could have all been so different had they dropped into non-league.

Of the 71 promoted teams to play in the Premier League, 31 have been immediately relegated. But Brighton fans may want to put a positive spin on it - more than half of them stay up. The average finishing position is 15th. 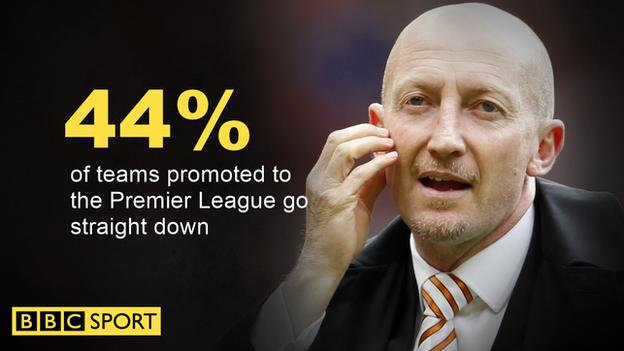 But Hughton, who has won 63 of his 123 games in charge on the south coast, has managed in the top flight with Newcastle and Norwich.

They are also in for a bumper payday, with promotion to the Premier League worth an estimated £170m.

Brighton manager Hughton told BBC Radio 5 live his players were up for the challenge of promotion straight away, despite the heartbreak of 2015-16:

"It had something to do with how the season ended last season, but I think it was more the fact that the players enjoyed being up that end of the table, competing, getting into the play-offs.

"I think it was a conscious decision that they wanted that again, and the signs were there early in the season.

"We recruited well early in the season, in the summer, but it was a real steely determination from the group of players that wanted to do it again."