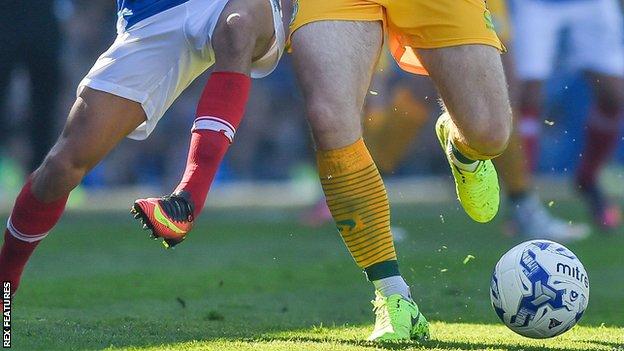 Four English Football League clubs are in danger of going out of business, says a study by financial experts.

According to the report by financial services firm Begbies Traynor, three unnamed clubs in League One and one in League Two are in "financial distress".

Despite rising from two last season, the overall number of these clubs is down from the high of 13 in the 2011-12 campaign, when the survey began.

In Scotland, only one club was found to be "financially distressed".

The authors of the report, which was completed in March 2017, had believed the threat of troubled clubs had been "all but eliminated" because of a rise in attendances, more television money and measures such as Financial Fair Play.

But Begbies Traynor are now urging financially struggling clubs to reduce wage bills or improve their share of TV cash, or risk going under.

Ex-Leeds chairman Gerald Krasner, football finance expert and partner at Begbies Traynor, said: "As an industry, football has cleaned up its act significantly in the last five years, partly with the help of the FA's rules, and partly through its own good management.

"That said, the last 12 months has seen a reversal of the steady reductions in distress and that's a concern for the sport in England, especially when attendances are climbing nicely in most leagues."

How were the results found?

The report used a number of legal financial data as markers of financial stability, breaking down those problems into "significant" and "critical" categories, a combination of which were used to decide whether a club was in "financial distress" or not.

Significant include those with County Court Judgments (CCJs), an order to pay a creditor, of less than £5,000 filed against them and a "sustained or marked deterioration" in indicators such as measuring working capital, contingent liabilities, retained profits and net worth.

Critical problems were those with CCJs totalling over £5,000 within a three-month period or winding-up petitions against them or which have entered Corporate Voluntary Arrangements.