You can see highlights of Manchester United v Chelsea on Match of the Day 2 at 22:30 GMT on Sunday on BBC One and the BBC Sport website.

There is pride, as well as points, at stake at Old Trafford on Sunday because Manchester United manager Jose Mourinho will not take it well if Antonio Conte beats him in his own backyard.

Conte has not just won both their previous meetings this season, his Chelsea side are 18 points above United and closing in on the Premier League title.

I did not expect the gap between the two teams to be so big but nobody could have foreseen how well Conte would do in what is a highly competitive league - I certainly didn't.

If you are looking for a comparison, you could say his impact in his first season in the Premier League has been Mourinho-esque - the same as when Jose first came to England in 2004 and blew everyone away. 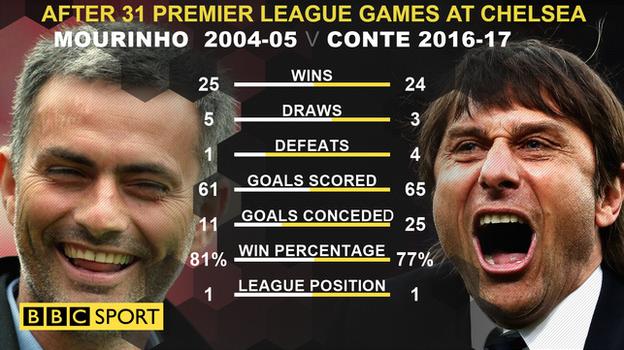 'It's unacceptable for Mourinho to miss out on the top four'

In many ways, Conte is the new Mourinho - he has only been in England for eight months but has already taken over his mantle.

By that, I mean the way Conte has been the outstanding manager this season with his results and how he has implemented his style of play to build a team that is exciting to watch and a threat going forward.

Just as with Mourinho, you would not exactly say that everyone loves him, but most people admire the job he has done at Chelsea, and his enthusiasm and charisma too.

Mourinho may see a bit of himself in Conte and I would understand if he is a bit envious of the success the Italian has had. He has stolen his thunder with what is essentially Mourinho's team, and got so much more out of the group of players he was left with after Mourinho's second spell at the club.

I was one of those who thought Mourinho would quickly transform United in a similar way, but they simply have not made the same transition since he took charge.

Yes, there are signs of improvement from the Louis van Gaal era but I still think United will finish outside the top four, which is pretty unacceptable when you consider how much money they have spent. 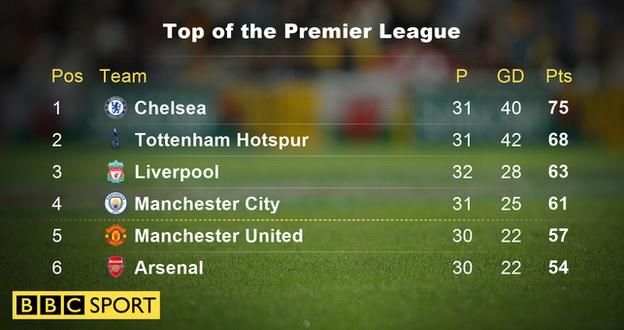 If they do not qualify for the Champions League by winning the Europa League, then you cannot get away from the fact that this season will be a distinctly disappointing one.

I am not suggesting Mourinho is going to get the sack in that scenario - or that he should do - but, for United and for him, is winning the League Cup and finishing fifth or sixth really enough?

'United's biggest problem is their lack of goals'

Mourinho has already clashed with Conte on the touchline this season, and he will be absolutely desperate to beat him this time.

I don't think United can play an open game against Chelsea on Sunday because, if they try to go toe to toe with them, the way Conte's team counter-attack will really cause them problems.

So I am expecting a cagey affair. If you asked me to pick a winner I would go with the Blues but I just have a feeling Zlatan Ibrahimovic will play a big part in the outcome.

I would not put it past him to do something special to decide the game - but even if United do come out on top at Old Trafford, they face a huge task to break into the top four now.

Looking at their remaining fixtures, they will need to go on an unbelievable run in some difficult games. At the same time, they have to hope Liverpool or Manchester City slip up because the top two seem to be too far clear now. 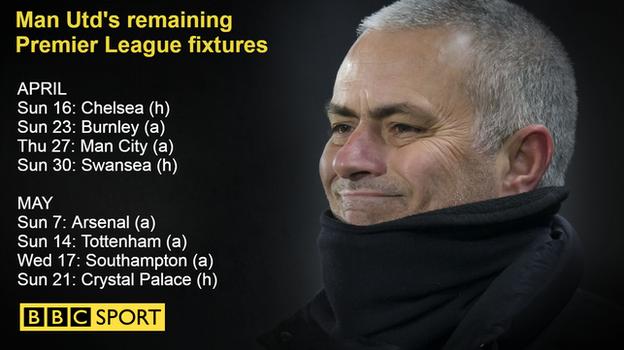 You cannot rule United out of winning all of those games, simply because of who they are and the quality they have in their team.

But, on this season's form, I just cannot see it.

United are unbeaten for 21 league games, going back to their 4-0 defeat at Stamford Bridge in October, but it is their inability to score goals that has been the determining factor in where they are in the table, because they have not beaten a lot of teams you would expect them to run riot against.

They have scored one more than Bournemouth and have the lowest total in the top six by a significant amount. I don't think anyone imagined them struggling so badly in front of goal.

Van Gaal, Mourinho's predecessor at Old Trafford, was criticised heavily for his brand of football - but his United team scored more goals in his first season, and so did David Moyes' side.

Ibrahimovic has had a fantastic season and bailed them out on countless occasions but it feels like they rely solely on him to score, and that has been their biggest problem.

'Mourinho has become painful to watch'

Mourinho is right when he says his other attacking players need to be more consistent, but to publicly criticise the likes of Anthony Martial and Marcus Rashford is a risky tactic.

We have seen something similar with his treatment of Luke Shaw, and now there are rumours he has had a bust-up with David de Gea too.

I can understand what he is saying about Shaw being in the last-chance saloon but, for whatever reason, there is not complete harmony in the United camp at the moment.

That is the other big difference between what Conte has achieved at Chelsea, and the way he has done it - because it appears there is total harmony there, with everyone pulling in the same direction.

Whatever he is talking about, Mourinho's whole demeanour as a manager seems to have changed - he used to be witty and charming when he spoke to the media, but now he is painful to watch.

All of that sort of behaviour seems to be an attempt to deflect attention from some of the issues affecting his team.

For example, when he spoke to the BBC's Conor McNamara after United drew at home to West Brom, his emphasis was on pulling Conor up for his question, rather than concentrating on the matter in hand - which is why his team are not doing well enough in the final third of the pitch.

'United fans have been patient, but will it last?'

The buck has to stop with Mourinho at some point - he will know himself that he has to do better, and he has a lot of work to do.

This is his first season at United and, in his defence, you could argue this is not his team yet.

But that argument does not really work when you think about how quickly Conte has made a difference at Chelsea, and how far United are behind them.

United have already invested heavily in their team in the past three years - Mourinho has spent about £150m, and Van Gaal about another £250m in his time in charge, which is an astonishing amount to lay out and still be outside the top four.

To change that, it looks like they will have to do the same again this summer, but how much more money will they throw at it, and where does the spending stop?

The United fans have been exceptionally patient with Mourinho so far but I am not sure if that will last going into next season if they miss out on the Champions League again.