Which elite club has Tottenham striker Harry Kane joined? Which Premier League defender has the most assists? Which boss can't stop ringing the changes?

Here we attempt to answer those questions, and take a look at some of the other interesting stats from the weekend.

He is the one-season wonder that cannot stop scoring.

Harry Kane did not so much burst onto the Premier League scene, rather bundle his way through a series of loan spells at Leyton Orient, Millwall, Leicester and Norwich before a run of games at the end of the 2013-14 season resulted in his first league goals for Tottenham.

But the England international has been prolific ever since, silencing the critics who said he would fail to replicate the form that brought 21 goals in the 2014-15 campaign.

The goal against the Cherries was Kane's 69th in 110 Premier League games, and his 20th in just 24 appearances this season - the 23-year-old's most efficient in front of goal.

Of the four in the elite club, only all-time Premier League top scorer Shearer, with 0.89 goals per game in the 1996-96 campaign, has a better strike-rate for a single season.

In fact, in the four consecutive seasons he scored 20 or more goals, Shearer broke the 30-mark on three occasions.

Arsenal striker Henry scored 20 or more goals for the most successive campaigns, doing it for five years on the trot and hitting 30 in the Gunners' Invincibles season of 2003-04.

Mauricio Pochettino's Tottenham are in fine form, and are breathing down the necks of leaders Chelsea, after recording seven straight wins for the first time since 1967.

But how about this one? Tottenham's thrashing of Bournemouth on Saturday was their second 4-0 win on the bounce and the eighth time they have hit four or more goals in a top-flight match this season.

That must be some kind of record? Well, not quite...

Liverpool and Manchester City hold the joint-record having scored four or more goals 11 times apiece during the 2013-14 season, which ended with City pipping the Anfield outfit to the league title.

Manchester United achieved the feat on 10 occasions when they won the league in 2000 and again a year later, when they finished third. 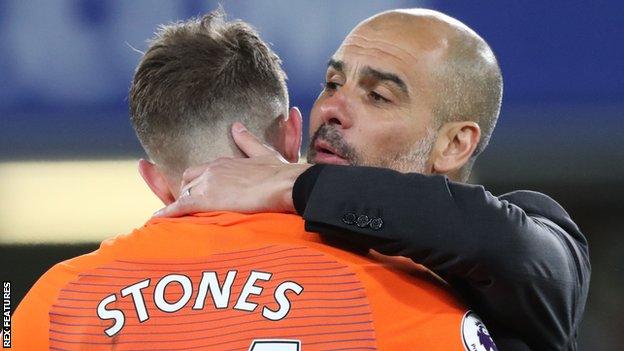 Manchester City players have got used to Pep Guardiola ringing the changes, with the Spaniard having now made 100 alterations to his starting line-up in the Premier League this season.

That is 11 more than any other side in the division, but tinkering does not necessarily equal success. Just ask Chelsea boss Antonio Conte.

The league leaders have made only 33 changes to their starting teams this season, with two of those forced against Manchester United on Sunday following an injury to goalkeeper Thibaut Courtois and an illness for Marcos Alonso that meant the defender pulled out before kick-off.

So how do rest of the Premier League's top six compare?

The record for the most changes in a season is Manchester United in 2013-14, when David Moyes and interim boss Ryan Giggs made 144 between them, while the least came from Roy Hodgson's Fulham with 24 in 2008-09.

The Everton left-back became the first defender in Premier League history to set up 50 goals when he teed up Romelu Lukaku in the Toffees' 3-1 home win against Burnley on Saturday.

That in turn made Lukaku the first man to score in nine straight home games for Everton since Dixie Dean in 1934. Just imagine if Dean had played in the same side as Baines...

Jose Mourinho completed a clean sweep of beating all 34 clubs he has faced in the Premier League when Manchester United saw off Chelsea on Sunday.

That 2-0 defeat at Old Trafford put a dent in the Blues' title chase, but it also unmasked a perhaps more telling statistic.

Chelsea have now gone 10 Premier League games without keeping a clean sheet for the first time since December 1996 when, with Ruud Gullit as player-manager, they ended a run of conceding in 13 successive games.

Mourinho's United side also stopped the Blues having a single shot on target.

The last team to stop Chelsea managing an effort on goal in the Premier League? Manchester United, at Old Trafford, back in September 2007.

Sunday's win meant the hosts extended their unbeaten run in the competition to 22 matches - the longest within a single season since Sir Alex Ferguson's side went 24 without defeat in 2010-11.

Barring a monumental collapse from the sides above them, that would make United the team to go on the longest undefeated run during a season and not win the title.

Is there anything worse than watching your team throw away a lead? Try being a West Ham fan this season...

The Hammers led 1-0 and 2-1 at Sunderland on Saturday before twice being pegged back at the Stadium of Light. That means Slaven Bilic's side have thrown away a league-high 22 points from leading positions in the Premier League this season.

The statistics suggest were it not for their inability to hold on to a lead, West Ham could be competing for a top-five spot this year. Those extra 22 points would catapult them up to a point below Manchester United in sixth.

But who are the worst offenders?

Yes, losing 33 points from winning positions was not enough to get in the way of Glenn Hoddle being named England boss after his Chelsea side finished 11th in 1995-96, while an 11th-placed finish for Spurs in 2007-08 after dropping the same amount was, well, just a little bit 'Spursy'.

As for Wimbledon, the consequences of shedding points from winning positions proved far worse.

The Dons were relegated to the second tier in 2000 after finishing 18th, three points adrift of Bradford City, and were never to return.