The story of a team rising from the bottom tier of England's Football League to the top is an increasingly familiar one, with Hull, Swansea and Bournemouth among the most recent examples.

But few of those tales have been more remarkable than that of Brighton & Hove Albion, whose promotion to the top flight was confirmed with victory over Wigan on Monday.

BBC Sport speaks to pundits, players and manager Chris Hughton about the Premier League newcomers who, just 20 years ago, were battling to stay in the Football League.

'The fulfilment of dreams'

It took until the very last day of the 1996-97 season before Brighton could breathe easy, as a 1-1 draw with Hereford secured their league status.

Despite the result, Brighton's former owners went ahead with the sale of their old Goldstone Ground, leaving the club to share Gillingham's Priestfield Stadium for two seasons.

The club then moved back to Brighton, playing at the Withdean Stadium - a site not originally built for football - before finally switching to their current Amex Stadium home in 2011 under the ownership of Tony Bloom.

"What happened on Monday is just the sensational fulfilment of so many people's dreams," said BBC pundit Mark Clemmit.

"The one name I keep thinking about is Dick Knight, who sort of galvanised everybody in 1997, because don't forget not only did they nearly go out of the league, but they lost their stadium then as well.

"The owners at the time kind of pulled it from under the club, and have never ever been forgiven by the supporters.

"It was Dick Knight who picked it up by the bootstraps, plus several others that accompanied him - but he was the majority shareholder."

Brighton had looked destined to complete their journey from bottom to top 12 months ago, but a 1-1 draw with Middlesbrough on the final day of the regular season meant they missed out on goal difference.

Further disappointment was to follow, as their hopes of reaching the Premier League were dashed with a 3-1 aggregate loss to Sheffield Wednesday in the play-off semi-finals.

It was not an unfamiliar feeling for Seagulls fans, who had suffered defeat at the same stage in both 2013 and 2014.

"They've been good all season. They've bounced back, they've shown a really good determination and a real desire to want to win as many games as possible."

Brighton captain Bruno added: "It's been five years now for me and it's been hard because we were really close to getting promoted for three seasons.

"Last season was tough for us and we were really close - but this season we've been outstanding."

Hughton is no stranger to the Premier League, having guided Newcastle to Championship promotion in 2010, then led Norwich to an 11th-place finish in the top flight in the 2012-13 season.

The former Republic of Ireland defender has turned Brighton into one of the defensively strongest sides in the Championship since taking over in December 2014, keeping 47 clean sheets in 111 league games in charge. 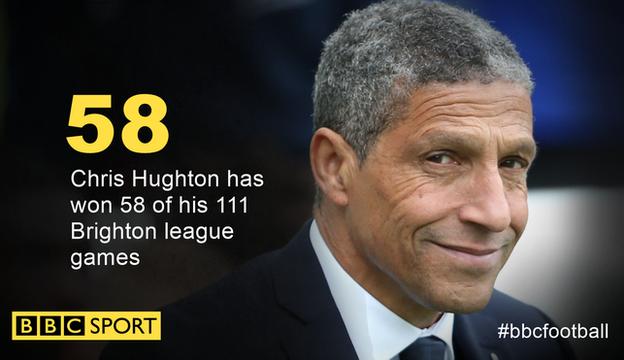 "Because he's quiet, people sort of assume that he's a nice bloke and that people can ride roughshod over him - but you can't.

"There's a real steely determination in there and I think as he's gone from job to job he's embraced the way football's changed."

Hughton's success comes despite only taking his first managerial role in 2009, when he replaced Alan Shearer as Newcastle boss.

"I think a lot of people, for a long time, had him marked down as an assistant or a coach," added Clemmit.

"He's already won one title with Newcastle United, he's got another team promoted, and then in his other two full seasons in the Championship he took Birmingham to the play-offs and he took Brighton to the play-offs.

"Even during the celebrations yesterday, you could see he was containing it. He was modest enough not to get involved in the players' celebrations, one eye on getting the title over the line.

"There'd be some justice as well in that, wouldn't there? Norwich, one of the teams that dismissed him, that didn't see the merits of letting him have a proper long-term go, is where he could secure the title on Friday."

'We're a team of friends'

The bond Hughton has helped to create at Brighton this year has been tested by adversity off the field.

In November, French winger Anthony Knockaert's father died, prompting at least 10 of his team-mates and Hughton to travel to France to offer support at the funeral.

The 25-year-old has responded in sterling fashion on the field, contributing 15 goals on his way to being crowned Championship Player of the Year.

"It has been the best thing I have seen in football, to come all the way from England to the funeral," he said in December.

"It means a lot for me and my family and I will never forget it."

Brighton have also dealt with the absence of defender Connor Goldson, who had heart surgery after routine cardiac screening discovered a defect in December.

"Obviously there have been things the whole season that have brought us even closer together, but we're a close group anyway no matter what happens," the 24-year-old told BBC Sussex.

"That's why we're always here for each other. Obviously things happen in life, and what happened with Anthony's dad was a sad moment for him.

"With me this year, obviously I wasn't needed, but we all pulled together, we're all a team.

"We're all a team of friends and that's what gets us to where we are."

'They're a club that will push on'

While securing the Championship title with victory at Carrow Road on Friday is the immediate aim, Hughton and Bloom can now start preparing for life in the top tier.

While some teams might look to splash the cash in pursuit of Premier League survival, Hughton appears to favour a more cautious approach.

"The only way to do it is to recruit sensibly, to not put the club in a position where you're going well above your means," he told BBC Radio 5 live.

"There is a huge gap between what you need to pay for players in the Championship and the fees that are demanded for Premier League players.

"What we've got to do is to try to make sure that we get that balance right."

Now, only four months from starting their Premier League campaign, 20 years on from being on the brink of disaster, where do the club go from here?

"The great thing for them is that because of the new training ground, and because of the actual ground, they are ready and set up for the Premier League," said Lawrenson, a former Brighton player.

"So if they can just survive, in inverted commas, that first season in the Premier League, I do think they're a club that will push on from there."