Emre Can scored one of the goals of the season as Liverpool beat a poor Watford to capitalise on favourable results in the race for the Champions League.

The Reds midfielder met Lucas Leiva's delivery with a wonderful bicycle kick which flew into the top corner.

Watford rarely threatened, but almost snatched a point when Sebastian Prodl smashed against the bar in injury time.

Jurgen Klopp's side know they will secure a top-four Premier League finish - and a return to the Champions League for the first time in three seasons - by winning their final three games.

The Merseyside club will host Southampton and relegation-threatened Middlesbrough at Anfield, either side of a trip to West Ham.

Liverpool knew they would have slipped out of the top four before kick-off at Vicarage Road had their nearest challengers all won over the weekend.

But the Reds watched as Manchester City, Manchester United, Arsenal and Everton failed to crank up the pressure as they each dropped points.

It meant Liverpool's slender advantage remained intact - which even Klopp admitted he was surprised about before kick-off.

The German manager also stressed their rivals slipping up meant nothing if his side did not win their own games.

That they did, despite lacking fluency in a scrappy performance.

For much of a drab first half, during which forward Philippe Coutinho went off injured and was replaced by the returning Adam Lallana, the Reds rarely looked like threatening an organised Watford side.

Lallana, who had missed the previous five matches with a thigh injury, did clatter the crossbar with a wonderful volley after Hornets keeper Heurelho Gomes' poor punch.

However, that was soon surpassed by fellow midfielder Can.

"It was a massive win," said England international Lallana. "We have three games left now and it is in our hands. We must stay focused." 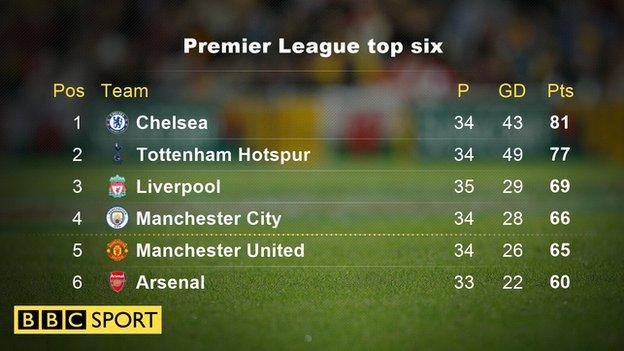 Reds midfielder Can illuminated what had been an insipid opening 45 minutes with a moment of inspiration shortly before the break.

Can immediately raced towards the away dugout where he was mobbed by ecstatic team-mates and manager Klopp.

"That is the best goal I've ever scored," he said.

"I saw the space and I ran behind and my first thought was I wanted to head it, then I didn't think too much."

Team-mate Lallana added: "It was a worldy goal and worthy of winning any game."

Hornets lack sting as they aim to better last season

Watford midfielder Tom Cleverley warned Liverpool before kick-off that his side would still have "a big say" in the battle at the top of the table, with Walter Mazzarri's team rounding off their season with games against Manchester City, Chelsea and Everton.

Their priority is eclipsing the 13th-place finish and total of 45 points they secured in their top-flight return last year.

And Hornets skipper Troy Deeney said he "expected a reaction" after a tame defeat at Hull in their previous game. However, that failed to materialise.

Watford, for all their defensive resilience and organisation, offered little attacking spark as Liverpool controlled possession and territory before half-time.

The home side improved after the break as Etienne Capoue and Daryl Janmaat finally forced Reds keeper Mignolet into serious saves, before their best chance arrived in the final few seconds.

Liverpool, as they have done often this season, failed to deal with a set-piece into their box as Prodl met a flick-on with a fierce strike that cannoned back off the bar.

Despite their limp performance and daunting run-in, Watford are unlikely to be dragged into the relegation battle.

Mazzarri's side remain on 40 points - usually considered the benchmark for survival - eight above third-bottom Swansea who only have three games left.

Man of the match - Emre Can (Liverpool)

"I think that if you look at all of the Liverpool games that they play, they usually create five or six clear chances.

"We didn't concede them almost anything and had a couple of chances so overall it was a good performance.

"Usually I don't like to speak about luck but today we were completely unlucky.

"We didn't deserve to lose."

"We have pressure and it means you fight for something that is good. It is positive pressure. We want to stay focused.

"We don't expect for a second it will be easy to reach the Champions League. If people think we have the three points against Southampton they can not have seen Southampton this season.

"We didn't play perfect against Watford and a draw would have been hard to accept, but we got the three points and that is all that the lads deserved."