Harrop was one of four players given their first top-flight starts as manager Jose Mourinho named the youngest United line-up in Premier League history, with an average age of 22 years and 284 days.

The 21-year-old midfielder was brimming with confidence and lashed in a superb finish from inside the box in the first half, and could have had a second, but curled an effort narrowly wide.

Paul Pogba doubled the advantage with a low strike before being replaced by Michael Carrick with Wednesday's Europa League final against Ajax in mind.

He is also the first player born in 2000 to appear in the Premier League.

Palace's best chance went to Christian Benteke in the second half, but the striker's towering header struck the foot of the post.

Victory means United collect £28.5m in competition prize money for a sixth place finish - their second successive season outside the top four - while Palace end the season in 14th, earning them £13.3m.

One more to go for United

The margins between this being a successful season for United or a failure are fine, and it all hinges on Wednesday's 64th and final game in Stockholm.

Win the Europa League final and they end the term with a second trophy to go alongside their EFL Cup triumph, as well as a passage into next season's Champions League group stages. Lose and it means another season out of Europe's elite club competition.

But their fine cup form has been in contrast to a forgettable top-flight campaign in which they have claimed their fewest Premier League victories (18) and most draws (15) - including 11 at Old Trafford.

Their patchy performances at home also meant they collected one more point on the road - 35 - than they did on their own turf.

But they finished with a flourish, with a number of youngsters being given their debuts, including Harrop, Gomes, goalkeeper Joel Pereira, left-back Demetri Mitchell and midfielder Scott McTominay.

It was a particularly memorable one for Stockport-born Harrop, who scored a superb opening goal. He said afterwards: "It was an amazing afternoon. I have dreamed of that moment so many times so I cannot believe it came true.

"I have to thank Mourinho for giving me the opportunity to play."

That 90 minutes couldn't have gone much better for Jose Mourinho and Manchester United. A comfortable win, a goal for Paul Pogba, no injuries and debuts for five youngsters.

The major talking point is what happens to Wayne Rooney. Substituted to a standing ovation near the end, Rooney led the post-match 'lap of appreciation' accompanied by his three children. There was nothing unusual in that, nor the wave he gave to both sides of the ground as his number went up to be replaced, given United were coasting to victory at the time.

But if it proves to be his last competitive appearance for United at Old Trafford, it was rather subdued, and somewhat at odds with the way he began, lashing home that wonderful hat-trick on his debut against Fenerbahce in 2004.

That remains one of Rooney's top three Old Trafford moments. The others? The 'angry' volley against Newcastle in 2006 and that staggering overhead kick against Manchester City in 2011.

Jose Mourinho did fulfil his media obligations after today's game - but it wasn't very enlightening. He went through the TV area as his team were on their lap of appreciation, and before the crews had chance to get down and ask him a question.

Mourinho then headed straight to the conference room underneath the main stand, where about four members of the media were present as the remainder were watching Rooney and his team-mates make their way around the ground, some trying to work out if the United manager was actually with them.

The Portuguese sat down, United's media officer asked if there were any questions, none were forthcoming, Mourinho said "good", stood up, added "bye guys" and was gone. Those who saw him leave reckoned he was out of the ground by 17:15.

Allardyce does his job

This game came a year to the day since the two sides met in the FA Cup final at Wembley, with Palace losing 2-1 in extra-time.

They will just be relieved that this difficult season in which they flirted with the prospect of relegation to the Championship has drawn to a close with them still in the top flight.

Boss Sam Allardyce replaced Alan Pardew in December with the Eagles 17th in the table, his first job since an ill-fated one-game spell as England manager.

It took the former West Ham, Blackburn and Sunderland manager six games to claim his first victory, but eight wins from his 21 games in charge guaranteed another season in the top flight.

The Londoners barely created any chances against United and the damage was done early on as they conceded two goals in the opening period, with the two sides taking a more leisurely approach in the second half.

Attention will now turn to bolstering the squad in the summer and they will be hoping to prevent bigger clubs from signing key players such as winger Wilfried Zaha and striker Benteke. 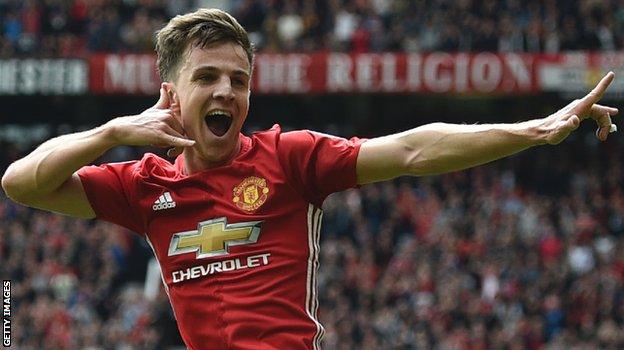 An unforgettable debut for the United youngster, capped off by a goal.

Manchester United manager Jose Mourinho tells MUTV: "Don't ask me too many things because now I am in the final, let me go home."

Crystal Palace manager Sam Allardyce: "We have all worked extremely hard, from the owners' support throughout the whole football club. My job was to lift everyone on the pitch and behind the scenes and get them working in the right direction. With the investment in January, very, very, very good performances came and that is why we stayed in the Premier League.

"Beating Chelsea away, Arsenal at home and Liverpool away in the space of a few days, had we not got [those wins] we would have been relegated. They were the big ones.

"We now need to grow, develop and invest. You need to choose the right players and not the wrong ones. Recruitment is the difficult task in the summer. Any players we bring in have to be better than the ones we have now."

One to seven for United - the stats