Italian football might have looked very different over the last two decades if an impressionable 12-year-old had not been captivated by the Cameroon goalkeeper at the 1990 World Cup.

Gianluigi Buffon played as an attacker back then but the performances of Thomas N'Kono - playing in his third World Cup - inspired him to try life as a goalkeeper.

"All the eyes of the world were on players like Diego Maradona and Gary Lineker, but I was mesmerised by Thomas N'Kono," said Buffon.

"It was the things he did for Cameroon during that World Cup that inspired me to become a goalkeeper myself."

The Indomitable Lions defeated holders Argentina on their way to becoming the first African side to reach the quarter-finals of the World Cup, where they were unluckily defeated 3-2 by England in Naples.

When N'Kono retired he asked the Italian keeper to play in his farewell match - in Cameroon.

"I first met him when he was 20 and he was with Parma," N'Kono told the BBC's World Service,

"A year later I asked him to play in my farewell game in Cameroon. He said 'yes, no problem', but I never thought he would come.

"Then, at the last minute, he called me to say he was at the airport about to come to Cameroon. It was amazing."

The last time the two men met they discussed Buffon's eldest son Louis Thomas, named, at least in part, after the Cameroon keeper. N'Kono asked how Buffon's eldest was coming along. He told him the nine-year-old was doing well - but would play as an attacker, not a keeper.

N'Kono, who spent the bulk of his career with Spanish side Espanyol, is now 60 but was in his 40s when he retired. Buffon is now 39 - and still at the top of his game.

On Saturday, the man with 168 Italian caps will play in his third Champions League final, having tasted defeat in 2003 and 2015.

His Juve team have conceded just three goals en route to the final and are the only unbeaten team in the competition.

But they face a Real Madrid team fresh from capturing the La Liga title and determined to retain the Champions League they won with a shootout victory over Atletico Madrid last season.

The decisive penalty last season was scored Cristiano Ronaldo - and the Portuguese claims he is fresh and ready to go after a season when he has been regularly rested by Zinedine Zidane.

It is also the season when Ronaldo became the first player to score 100 goals in the Champions League.

And it is the fear of facing Ronaldo that Buffon hopes will give him a competitive edge in Cardiff on Saturday.

"It's the kind of fear you need to have when you play this kind of game," Buffon told Italian broadcaster Mediaset.

"The eve of a match of this kind, of this level, is always pretty much the same. You have to find your concentration; you feel a degree of fear and respect towards your opponents, but you also feel aware of your abilities - which is your key weapon.

"I'm pleased the media tend to see the game as a battle between me and Cristiano, but it's not the reality.

"We will play the game with confidence. We just want to have no regrets at the final whistle."

Watching him close-up in training and during games is really quite impressive. Weaknesses? He has none.

Regrets are something that Juve know all about in the Champions League.

If they lose on Saturday, they will equal the record for the most consecutive final defeats, currently held by Benfica.

"I have always maintained that, in football, making the final means nothing if you don't win it," added Buffon.

"I don't look at the Champions League as the trophy that evades me - but, yes, it is a big dream for me to win it.

"It would be great joy. There's nothing better in life than getting your reward, because you know how hard you've worked, how much you've sweated for it - and with team-mates who've worked even more to get it."

There appears to have been a groundswell of goodwill towards Juve because of the Buffon factor.

It is a sentiment you might expect from someone who played alongside Buffon for so long for club and country - but old foes like Ryan Giggs and Edwin van der Sar have said they would like the Italian to finally win the trophy.

And even Iker Casillas - who made more than 500 appearances for Real before moving to Porto in 2015 - has expressed his desire to see Buffon lift the trophy on Saturday.

"If they weren't up against Madrid, I would want to him to win the Champions with all my heart," he said. "He deserves it - Gigi shouldn't end his career without a Champions League."

And what advice does N'Kono have for the man he inspired all those years ago?

"Enjoy it - enjoy it like you always have," he said.

"If you enjoy what you do in life you will always do it without any pressure."

The man Buffon must stop - Ronaldo's astonishing 12 months in photos 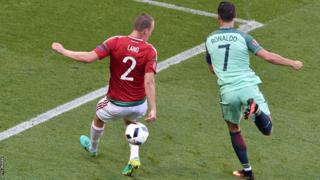