Jordan Pickford has become the most expensive British keeper in history after Everton paid £25m - rising to what would be a club record £30m - to sign him from Sunderland.

The 23-year-old, who is on duty with England Under-21s, has signed a five-year contract at Goodison Park.

Pickford made 29 Premier League appearances last season but could not prevent Sunderland being relegated.

A product of the Black Cats' academy - he joined the club aged eight - he has had spells on loan at Darlington, Alfreton Town, Burton Albion, Carlisle United, Bradford City and Preston.

Pickford made his first-team debut for Sunderland in a 3-1 FA Cup defeat by Arsenal in January 2016.

He added: "Last season was my first in the Premier League so to get this opportunity with Everton now, to be able to go forward with my career and show everyone what I can do with Everton is unbelievable.

"This is an exciting time for the club and for me, too, with the ambition being shown. I just want to be the best I can be to help."

Manager Ronald Koeman added: "Jordan is a very talented young professional who also has a real hunger for success, and that's important for us as we now look to make further progress in the seasons ahead."

The deal is an initial £25m transfer fee with £5m of potential add-ons, making him the third most expensive keeper ever.

Gianluigi Buffon's move from Parma to Juventus in 2001 was reported to be worth 53m euros, or £32.6m at the time, while at current exchange rates, Ederson's 40m euros transfer to Manchester City last week is equivalent to £35m, which is a world record in sterling, but not euros.

Pickford's fee smashes the previous record for a British goalkeeper, when Koeman - then Southampton boss - paid £10m to sign Fraser Forster from Celtic in 2014.

Despite being 23, Pickford is eligible to play for the Under-21s as rules allow a select number of over-aged players in the squad. 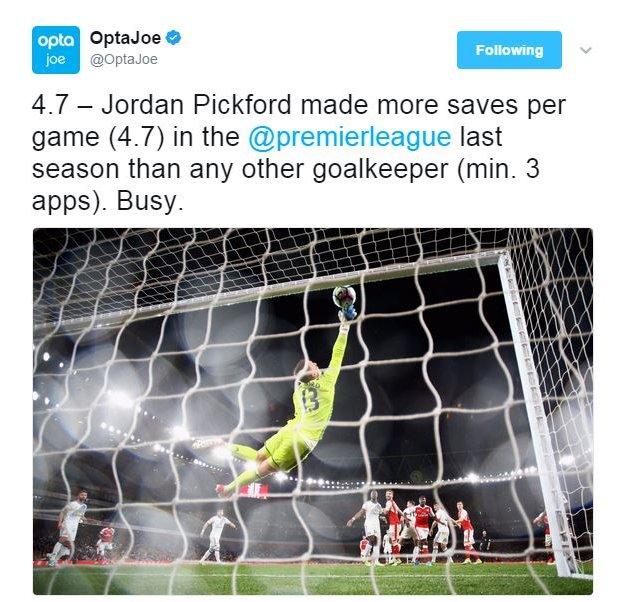