Wayne Rooney's return to his first club Everton has ended a 13-year association with Manchester United.

During that time, he has captained the club, made 559 appearances, scored 253 goals, including a volley against Newcastle and an overhead kick against Manchester City that will surely go down as two of the greatest United have ever scored.

But how will he be remembered at Old Trafford? And how does that fit with his achievements on the field?

A lack of genuine affection?

BBC Sport's Simon Stone: Day after day, in season or out, tourists and fans have their pictures taken next to the 'Holy Trinity' statue outside Old Trafford.

During games, supporters still sing regularly in homage to famous past players.

But genuine affection has, largely, proved elusive - and a precise reason is difficult to pinpoint.

Those two highly public attempts to leave - especially the first time in October 2010, when he accused United of "lacking ambition" - left a stain, even though Rooney was articulating what many fans felt about perceived financial restrictions placed on the club by the Glazer family ownership.

Maybe it is the sense of unfulfilled potential. After all, between his arrival in 2004 and that ill-fated 2006 World Cup, Rooney was the senior youngster to Cristiano Ronaldo, the player more likely to achieve the staggering heights the Portuguese has gone on to reach.

Maybe it is his accent. Maybe a Liverpudlian could not truly be accepted by the Old Trafford faithful.

Whatever the reason, it is unbelievably harsh.

Maybe, as with David Beckham, the passing of time will allow Rooney's United career to be judged more favourably.

Certainly, if recent history is any guide, it may be a while before any newcomer arrives at Old Trafford and creates the legacy Rooney is leaving behind.

A man who never quite found his position?

Michael Cox is the editor of Zonal Marking and has recently published a book called The Mixer, which studies the tactical history of the Premier League.

Cox: Rooney is an interesting player in a tactical sense because he has struggled to find his best position.

He broke through as a number 10, a bit like Paul Gascoigne. He was determined and had a powerful running style but he did not have the tactical discipline like others would in that position.

And yet his best season was the 2009-10 campaign, when he played as an out-and-out striker and scored lots of goals - 35 in all competitions.

In recent years, he has lost his acceleration and has had to drop into midfield. However, he has not taken to that role because he does not have the mobility to play there.

He has been very consistent in his goalscoring returns but sometimes former manager Sir Alex Ferguson and his successors were not able to fit him into one particular role.

Nonetheless, becoming the club's top scorer is an astonishing achievement. The same at international level too.

In terms of the record books, he will be remembered very fondly by both United and England fans - but at any one point there has always been an uncertainty about him, whether it was his physical fitness, mental wellbeing or tactical role in the side. He has had a peculiar career, consistent yet inconsistent within seasons.

Alan Shearer, Thierry Henry, Ryan Giggs, Eric Cantona and Cristiano Ronaldo would be in the top tier of the best Premier League players of all time. Then we have Steven Gerrard, Frank Lampard and David Beckham.

Rooney would be on the fringes of the top 10. He did not dominate the league like the other players and I don't think there was one particular season where Rooney won United the title.

Rooney's peak is hard to nail down. At international level it was 2004 and that was when United were not challenging for the title. His peak did not coincide with United's.

A stellar record at Old Trafford 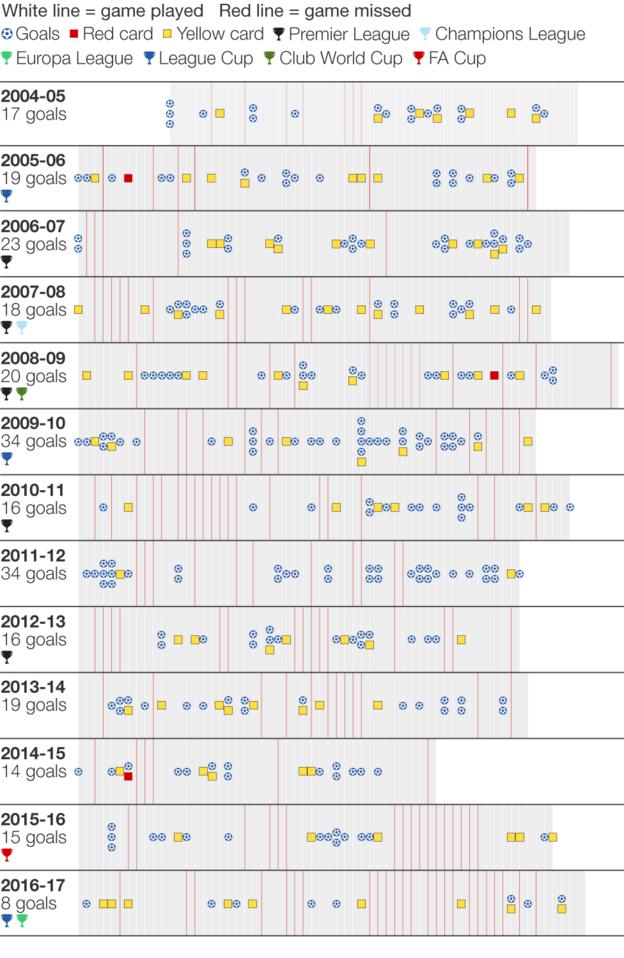