The one thing you weren't going to get from Brendan Rodgers in the aftermath of Celtic's disappointing performance against Rosenborg in the Champions League qualifier was uncertainty.

This is a man who betrayed not a scintilla of doubt after his team lost to Lincoln Red Imps around this time last year, so anybody expecting any kind of reservation from him about the second leg in Trondheim next week is in for a seriously long wait.

In the wake of the goalless draw - which could so easily have been 1-0 or 2-0 to Rosenborg had they taken some of their better chances - Rodgers spoke about Celtic's capacity for scoring away goals in Europe while adding that 0-0 in the first leg is as good a result for the home team as it is for the away team.

Rodgers was unperturbed. He praised his side, gave off a vibe of total authority and exited.

Celtic's goal-scoring record away from home on his watch? They've scored in four of their seven games on the road in Europe.

His take on the 0-0 being a good result? Going back to 2014-15, there have been 70 ties in the Europa League and Champions League, including qualifiers, that have begun with the home side drawing 0-0. In 36 of the 70 ties, the home team that drew 0-0 in the first leg were knocked out.

That's not far off 50-50 and that, in turn, is not far off Celtic's chances of progressing. Maybe experience gives them a slight edge on Wednesday, but it's only slight and it will only exist at all presuming Leigh Griffiths is fit to play, which remains a big presumption. 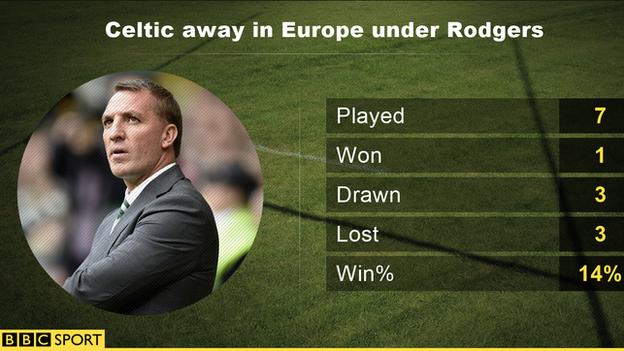 It was obvious from the opening minutes at Celtic Park that Rodgers' team were struggling to find a way of playing without a natural striker, Moussa Dembele being injured and Griffiths being both suspended and injured.

Rodgers thought he could get by with Tom Rogic as a de facto striker, pointing out that the Australian had played that way for half an hour against Partick Thistle towards the end of last season. He declared Rogic "brilliant" in that role, but that wasn't Champions League stuff, that was a no-pressure 5-0 stroll when the team was confident and could do no wrong.

Celtic can have a howitzer attack on their best days. Against Rosenborg, it was pop gun.

Rogic tried his best, but he was uncomfortable, neither a striker nor the fine midfielder we know he can be. He was trapped in no-man's land for most of the night. Scott Sinclair took a brief turn in the second half, but he was ill at ease as well.

Celtic's first shot on target came in the 77th minute. That tells you much about their lack of threat. It was unusual to see them so harmless in front of goal.

Rodgers says he's hopeful that Griffiths will be fit. It's a different ball game if he is.

It's reasonable to ask, though, why Celtic allowed a situation to develop whereby they had no striker available for a Champions League qualifier, a competition that is the beginning, the end and the in between of their dreams.

For a club with Celtic's ambition - not just of group stage but last 16 - is it sensible to have just two out-and-out goal-scorers in their squad, one of whom, Dembele, missed the last six games of Celtic's invincible domestic season through injury?

They can't read the future, but losing Dembele for the final month of their record-breaking campaign might have served as a reminder that they're thin up top and, perhaps, a back-up man might not be a bad way to go. Rodgers was asked about it on the eve of the Rosenborg game and his answer was interesting.

'Some say you can't have too many good players, but you can'

"If you have two highly-strung strikers who are fighting for a position and then you add a third one to the mix, it can actually work against you," he said.

"Some will say you can't have too many good players, but you can. It can give you a problem. It's just unfortunate that two get injured, so we'll see."

You can understand Rodgers' point. He's only going to start one striker in any given game, so how is he supposed to keep three happy if there's only room for one in his team? The last thing he needs is a player moping and upsetting the mood because he's not getting game-time.

Celtic have lofty goals though. They want to progress in Europe. They want to improve against the big shots of the Champions League. That's murderously difficult on their budget and the task doesn't get any easier when they leave themselves so shallow in such a critical area of the pitch.

Not a lot gets past Rodgers. He's a shrewd man. He would surely have weighed up the possibility of injury or suspension leaving him short in attack, but he reckoned he had enough to get by.

He had goals throughout the team. He had players, like Rogic, who could adapt. Or he thought he had.

In the six games that Dembele missed at the end of last season, it wasn't just Griffiths who delivered goals - he scored four - or, indeed, Patrick Roberts - who also scored four but who's no longer at Celtic. Callum McGregor, Stuart Armstrong and Dedryck Boyata got three each, Rogic two, Mikael Lustig one, as did Sinclair, who'd scored 24 before that.

Celtic knocked in 21 goals in those six games. Did that kind of dominance make them believe that they'd be OK even if the worst-case scenario unfolded and their main strikers were laid low? If it was a gamble then it backfired on Wednesday.

Rodgers problem-solved numerous times last season. After the humbling by the Red Imps, he fixed it. When Celtic got annihilated by Barcelona, their response in Europe was a thrilling home draw with Pep Guardiola's Manchester City, a team that had played 10 games to that point, winning all 10.

Another lesson was learned against Borussia Monchengladbach. Beaten comfortably by the Germans at Celtic Park, Rodgers' sorted his team out and got a deserved 1-1 away from home.

This is another big challenge, a pivotal, potentially season-defining point, despite the fact that we'll be barely into August by the time it arrives.

Nobody among the Celtic support will doubt Rodgers as he tries to plot his way through a delicate tie, but they'll be praying for Griffiths' return nonetheless.