England boss Mark Sampson says France coach Olivier Echouafni is "wet behind the ears when it comes to tournament football" as the teams prepare to meet in the last eight of Women's Euro 2017.

The Lionesses won all three of their Group D fixtures, progressing with Thursday's 2-1 victory over Portugal.

After Echouafni said England would "not want to play France", Sampson said his counterpart's record did not match his.

"He'll learn who to talk about and not to. It'll be a good game and we respect a very good French team. We are looking forward to it.

Speaking on Friday, Sampson stood by his comments, telling BBC Sport: "We're a team of street fighters and when we're poked our reaction is to poke back.

"I'm not the type to back down from a challenge, and I'm not sure this team are."

He has led the Lionesses to eight wins from 10 major tournament matches so far, including a third-place finish at the 2015 World Cup.

'They'll be more scared of us than we are of them'

The French, ranked two places higher than the Lionesses at third in the world, have not lost to England since 1974.

Les Bleues - who beat England 2-1 at the SheBelieves Cup in the United States in March - were among the pre-tournament favourites and were the seeded team in Group C.

However, after a narrow opening win over Iceland, draws against Austria and Switzerland saw them edge in to the last eight only as group runners-up.

They survived a major scare against the Swiss, coming from a goal down with 10 players to avoid a shock elimination.

That, coupled with England's dominance of Group D, means the Lionesses will meet France on Sunday in Deventer at 19:45 BST. 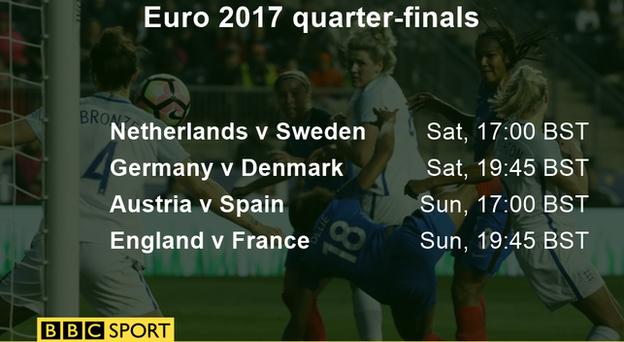 "We have three wins under our belt at the Euros, while France have one win," Sampson added.

"We feel confident for these high-pressure games. We've got a two-day turnaround, but we'll be ready for France."

England forward Nikita Parris, who scored the winning goal against Portugal, told Channel 4: "We've got so much momentum.

"We can't wait to go into the France game now. I think France will be more scared of us than we are of them."

England have been beaten by the French in the past three major tournaments, going out on penalties in the 2011 World Cup, losing 3-0 in the Euro 2013 group stages and suffering a 1-0 defeat in their opening game of the 2015 World Cup.

Parris' goal against Portugal was her first at a major tournament.

The Manchester City player told BBC Radio 5 live: "I didn't know what to do for a second, then I just ran to my mum in the crowd.

"I'm so happy to finally get a goal in a major championship. It's massive to be playing here. And I want a medal round my neck, so hopefully we can kick on against France now."

Barcelona's Toni Duggan, who opened the scoring in Tilburg, added: "I am so happy for her. The goal sums up her enthusiasm for the game.

"She skipped a few challenges, poked it home and was then off to her family and friends in the crowd. To see her do that on the big stage, I was made up for her."

'We have more to give'

England conceded their first goal of the championship to the Portuguese, who - like Scotland - were eliminated by Spain's superior goal difference in a head-to-head involving the three teams as all finished with three points.

"We have more to give, we can improve," added Sampson, who made 10 changes to his side on Thursday.

"From our experience, what we know about this England team is that we do get better as tournaments go on.

"We are the only team to give players so many minutes which means at any moment we can call upon anyone.

"So we go into this knockout stages exactly where we want to be, so it a great challenge for us to face France.

"We want to win this tournament the right way and that means we want to beat the best teams.

"We are in a good spot and there are some great teams in this tournament and we are certainly one of them."