For completed deals, check our transfers page and watch BBC Sport's Football Gossip Live where we discussed the latest news and rumours, including Philippe Coutinho's ongoing saga at Liverpool.

Liverpool are preparing to make a move for Bayern Munich midfielder Renato Sanches, 20, who has also been on Manchester United's radar. (Kicker via Mirror)

Chelsea are confident of signing Arsenal midfielder Alex Oxlade-Chamberlain, 24, for £35m before this summer's transfer deadline next Thursday. (Telegraph)

Arsenal face the prospect of having to sell England player Oxlade-Chamberlain, who is out of contract next summer and is set to reject a new Gunners offer. (Daily Mirror)

Here's who you picked...

City winger Jadon Sancho, 17, wants to join Tottenham as he believes his route to the first team under Pep Guardiola is blocked. (ESPN)

Barcelona defender Gerard Pique says Philippe Coutinho, 25, is doing everything he can to force through a deal to move to the club from Liverpool. (Daily Mail)

The Spanish club could also let Turkey midfielder and Arsenal target Arda Turan, 30, leave on a free transfer this summer. (Sport - in Spanish)

Swansea have cooled their interest in 28-year-old midfielder Nacer Chadli after being quoted in excess of £25m by West Bromwich Albion. (Daily Mail)

Winger Demarai Gray, 21, wants Leicester to start him or sell him, with Bournemouth offering nearly £30m for the former Birmingham player. (Daily Mirror) 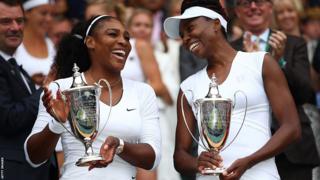 Tennis stars Venus and Serena Williams became vegans in 2012. Venus switched to the diet for health reasons with Serena doing it in support of her sister

Birmingham manager Harry Redknapp says he has not given up on signing Middlesbrough winger Stewart Downing, 33, despite stating negotiations have "slowed up". (Birmingham Mail)

Meanwhile, the Italian champions also held a meeting with Barcelona in Monaco over the possible transfer of the Spanish club's midfielder Andre Gomes, 24. (Mundo Deportivo - in Spanish)

Newcastle and Watford are considering a late bid for Leicester's Islam Slimani, 29, as the Foxes are open to cashing in on the 29-year-old Algeria forward. (Daily Mirror)

Fleetwood Town could be set for a windfall if their former striker Jamie Vardy, 30, moves from Leicester to Chelsea for £40m. (Fleetwood Today)

AC Milan are interested in signing Chelsea forward Diego Costa, despite the 28-year-old insisting he is only interested in rejoining Atletico Madrid. (Corriere dello Sport, via Express)