Manchester United made a winning return to the Champions League with a deserved home victory over Swiss side Basel.

Marouane Fellaini, who came on for the injured Paul Pogba in the first half, rose highest to head United ahead from an Ashley Young cross with 10 minutes to go to the break.

Romelu Lukaku strengthened their grip on the encounter by converting from among a group of players in the box from a Daley Blind cross following a short corner.

Marcus Rashford fired in his side's third from a Fellaini low cross seven minutes after coming on. The striker has now scored in his first appearance in the Champions League, Premier League, Europa League, FA Cup, League Cup and for England.

The scoreline could have been even greater for Jose Mourinho's dominant side, making their first appearance in Europe's premier club competition since 2015, having qualified by winning the Europa League in May.

They created numerous clear-cut chances, the best of which Henrikh Mkhitaryan side-footed against the post from close range after being found by a Lukaku cut-back.

Basel were pinned back in their own half for much of the game but could have forced a different outcome had Luca Zuffi not fired wide from an unmarked position in the box just before Fellaini's opener.

Mohamed Elyounoussi also forced David De Gea into a fine save with a rising shot from inside the box as the visitors became more ambitious in the final quarter of the match.

In the other game in Group A, CSKA Moscow beat Benfica 2-1 in Portugal.

Fellaini proves his worth again 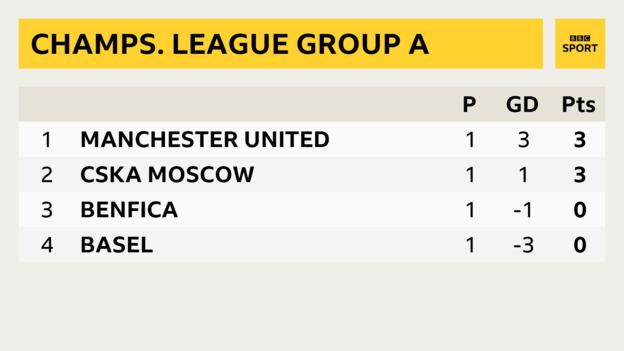 Before the game, United boss Jose Mourinho told reporters that he felt "weaker" without Fellaini in his squad.

The manager would rather not have had to call on him quite so early, with the Belgium midfielder coming on just 19 minutes in after Pogba suffered a hamstring injury.

It is a testament to Fellaini's display that United did not break stride following the loss of the in-form France international.

Fellaini was strong and accurate in the tackle, neat with his passing and once again illustrated his aerial prowess with the opener.

After starting the ball rolling for his side, he turned provider late on with an incisive pull-back to set Rashford up for the third goal.

Depending on the severity of Pogba's injury, United may need Fellaini now more than ever.

Another first for Rashford

Rashford is making it impossible for Mourinho to leave him out of the United side.

Having started three of his side's four Premier League matches to date this season, the England forward was left out to allow Anthony Martial a turn from the start.

Shortly after being introduced, he once again demonstrated his awareness of an impending opportunity and ability to locate space in which to capitalise, darting into the box to dispatch Fellaini's cross.

His connection wasn't the truest, but it was enough to carry the ball past Tomas Vaclik.

It was his third goal of the campaign, the third game in succession in which he has scored and another debut goal to further underline his status as one of the most natural finishers in the English game.

United unbeaten at home in a year - the key stats