Celtic sustained their heaviest ever home European defeat as Neymar led the way for Paris St-Germain in the Champions League group-stage opener.

The world's most expensive player coolly finished and then had a hand in PSG's second, which was finished emphatically by Kylian Mbappe.

Edinson Cavani converted a penalty for the visitors' third before the break.

Mikael Lustig's own goal was followed by Cavani's second of the night, a superb diving header.

Elsewhere in Group B, hosts Bayern Munich won 3-0 against Anderlecht, who had a man sent off.

Celtic have hosted many of the great powerhouses of European football over the years, but even those with the longest memories would probably struggle to recall a side as devastating as PSG.

Their speed of thought, speed of movement, accuracy and imagination was extraordinary. Their confidence on the ball - even when playing intricate passes in their own penalty area to get out of trouble - was a joy.

Quality on this scale costs, of course. The biggest compliment you can pay the visitors is they looked every inch the half-billion-pound team they are.

Celtic boss Brendan Rodgers went with young Tony Ralston at right-back with Lustig playing centre-half. Ralston was keen as mustard, biting into tackles on Neymar, but this was a night when enthusiasm and heart were not much use to Celtic.

Unai Emery's visitors had the ball in the net after 15 minutes but Cavani was offside. It was a warning to Celtic, not that it was needed. The subtlety of PSG's play was not something they could cope with. Soon, the doors started opening for the visitors.

Celtic had legitimate gripes about a foul on Scott Sinclair moments earlier, but when PSG countered it was precise and beautiful. Adrien Rabiot, relatively unsung in this team of stars but sensationally good on the night, played Neymar in behind Ralston and the Brazilian thumped his shot past Craig Gordon.

There were less than 20 minutes on the clock and all sorts of trouble was heading Celtic's way. They actually had some moments of optimism before PSG's second, Leigh Griffiths forcing a save from Alphonse Areola with a free-kick.

This modicum of Celtic hope was soon batted away. It was as if PSG were telling them that if they had the temerity to come out and attack there might be a heavy price to pay for it at the other end.

It was a moronic moment, an incident that governing body Uefa, correctly, will investigate. Heavy punishment is coming Celtic's way, that's a guarantee

The second came, Neymar at the heart of it again, of course. It was he who started the move and when Marco Verratti put in a cross from the right, it was Neymar who made the run - Celtic had not a notion where he was - and then nodded across goal. Cavani had a fresh-air swipe but lurking behind him was Mbappe, who thumped in the second.

A goal apiece for PSG's monster summer signings - and then a third for their principal goalscorer, Cavani. It was painfully soft from Celtic's perspective. A cross from Neymar, a push by Jozo Simunovic on Cavani and a penalty duly rifled home by the Uruguay striker.

The Celtic fans who were not open-mouthed at PSG's class by now were covering their eyes at the thought of what might happen next. They had no idea that the next moment would be so shocking - and, inevitably, so damaging.

A spectator ran on to the pitch, was allowed to make his way towards Mbappe and then appeared to aim a kick at the winger. Celtic fans booed him, but the damage was done.

It was a moronic moment, an incident that governing body Uefa, correctly, will investigate. Heavy punishment is coming Celtic's way, that is a guarantee.

Rodgers brought on Tom Rogic for Stuart Armstrong at the break and, at last, Celtic got some respite. Griffiths should have done better with a header, Ralston had a fine run and Sinclair had a shot saved by Areola.

PSG, in truth, were in relaxed mood through all of this. When they decided to get busy again they came close to adding more goals. 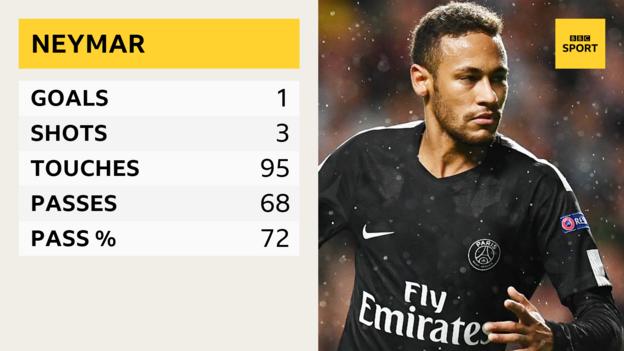 Neymar missed two excellent chances before Rabiot's replacement Julian Draxler bamboozled Sinclair and crossed only for the unlucky Lustig to turn it into his own net.

Cavani's magnificent angled header across goal and into Gordon's net made it five.

A historic thumping against the super-rich, lavishly brilliant visitors, a team that will, surely, make a major assault on Real Madrid's grip on the Champions League trophy.