The Blues - making their return to European competition having failed to qualify last season - rested several first-team players for the visit of the Azerbaijani champions, but still won with ease.

Pedro opened the scoring with a 20-yard curler from Willian's lay-off.

Italy right-back Zappacosta, on his first Blues start, ran 50 yards down the right wing, before sending over a cross that flew past Ibrahim Sehic.

Cesar Azpilicueta headed home a third after the break from Cesc Fabregas' cross.

Willian hit the crossbar, and substitute Tiemoue Bakayoko scored his first Blues goal with a deflected shot from close range.

Batshuayi then scored twice in the final 15 minutes - firing in from outside the box after being picked out in space by Bakayoko and then scrambling home Zappacosta's cross.

The win was always likely to be the easiest game in the group, with Roma and Atletico Madrid the other two teams in Group C. Those sides drew 0-0 in Rome's Olympic Stadium. 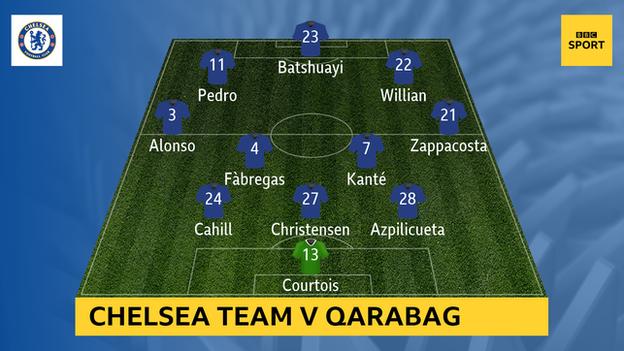 Chelsea boss Antonio Conte - whose side face seven games in 21 days - was able to name striker Alvaro Morata, Bakayoko and three of the back five who beat Leicester at the weekend on the bench. Captain Gary Cahill returned after a three-match domestic ban but was largely untested - although he was booked for a reckless foul.

Arguably the biggest winner of the changes was Zappacosta, a deadline-day signing from Torino for a reported £23m, who scored on his full debut.

He admitted afterwards that the goal was not intentional, but it still capped off a good performance and Victor Moses will have cause to worry about getting his place back.

With the game sealed, Eden Hazard, yet to start this season for the Blues after an ankle injury, was given 32 minutes to boost his match fitness before Sunday's game against Arsenal.

Batshuayi will be happy to score his first two goals of the season, although the standard of opposition - and his overall performance - are unlikely to have overly concerned the rested Morata.

Chelsea will have tougher tests to come

The game was Chelsea's first in Europe since they lost in the last 16 to Paris St-Germain 18 months ago, a 10th-place finish in the league in 2015-16 meaning they sat out last season's European competition.

They were comfortable against the first ever Azerbaijani team in the Champions League group stages, with Qarabag looking short of real quality or knowledge of how to play against a superior team.

Twice they switched off at short set-pieces, Willian receiving a short corner to set up Pedro's opener, then tapping a free-kick to Cesc Fabregas who crossed for Azpilcueta to score Chelsea's third.

The Blues deserved to win as emphatically as they did, and could have scored more with Marcos Alonso and Willian, who also smashed the ball off the crossbar in the second half, forcing saves from Sehic.

"To play the first game, then to win with a good result, to score many goals, to finish the game with a clean sheet - I saw a lot of positive things tonight," he said.

On his five changes, he said: "To play in the Champions League it means the coach trusts you. My message tonight was this: I trust all my players, not with only words, but with facts.

"If we think like last season to play with only 13 players, we are crazy. We have to improve all these players to try to create a positive competition between them."

And he says the Blues will not rush Hazard back from his injury.

"We must have a bit of patience with him and to try to give the possibility for Eden to recover very well.

"We must be calm and to do the best for the player and for the team. Otherwise we risk a bad injury to delay the situation. This is the right way. This process is good for him."

Qarabag boss Gurban Gurbanov said: "The game was very difficult for us. Chelsea played very good. Chelsea is a favourite for the tournament.

"We made lots of errors and I accept we must play even better. But I am satisfied with the way we played."

Man of the match - Willian

Chelsea host Arsenal on Sunday in the Premier League (13:30 BST). The clubs are back in Champions League action on Wednesday, 27 September. Chelsea visit Atletico Madrid, while Qarabag host Roma in Baku.