Harry Kane scored twice as Tottenham beat Borussia Dortmund to get their Champions League campaign off to a positive start and end their winless run at Wembley.

Kane's instinct in front of goal was the difference as Spurs were largely forced on the back foot by an impressive German side who dominated territory and possession.

His first goal - a rising angled finish following a determined run down the left - capped a frantic opening 15 minutes in which Son Heung-min's opener from an angle was cancelled out by a superb curling finish from Dortmund's Andriy Yarmolenko.

The England forward's second was a low finish inside the far post on the hour mark to give his side the edge they needed as they overcame the threat of their dangerous and relentless opponent.

However, the home side ended the game with 10 men as defender Jan Vertonghen was shown a second yellow card for catching Dortmund substitute Mario Gotze with a swinging arm.

The visitors can point an accusing finger at the officials, who ruled out a perfectly good goal from Pierre-Emerick Aubameyang for offside.

This is just the second win of Tottenham's tenancy at Wembley, which includes all of last season's home Champions League group stage games and two Premier League matches this campaign.

It leaves them second in Group H behind Real Madrid, who beat Apoel Nicosia 3-0 in Spain.

Kane proving himself on European stage 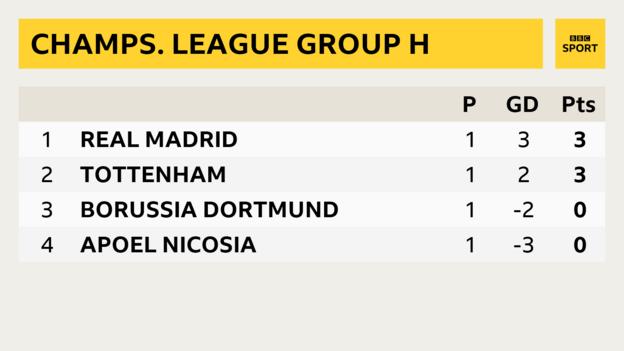 Before Wednesday's game, Kane spoke of his desire to break into the "world-class bracket" by adding goals in European competition to his impressive domestic haul.

The 24-year-old has scored more than 20 goals in each of the past three Premier League campaigns and opened his account for this season with his 100th and 101st Tottenham goals in Saturday's 3-0 win at Everton.

Both of his goals against Dortmund were world class, showcasing not only his ruthless ability to finish chances but also his determination and ability to fashion opportunities for himself.

Kane illustrated the creative aspect of his game too, setting up Son for what should have been the second goal of this industrious display as deputy to the suspended Dele Alli.

And Kane should have had a hat-trick when he dragged another shot wide of the far post following a headed pass from the busy Christian Eriksen.

He was withdrawn to a standing ovation, allowing Fernando Llorente his Spurs debut and taking with him a record that now reads 28 goals in his past 22 games for club and country.

Dortmund are a modern marvel of a club, repeatedly churning out highly competitive, fluent young sides.

They arrived in London as joint leaders of the Bundesliga but seemingly handicapped by an injury crisis that denied them the use of a number of key first-team players, including Marco Reus, Raphael Guerreiro, Andre Schurrle and captain Marcel Schmelzer.

But such is the ability of their squad and the nous of new manager Peter Bosz - formerly of Ajax - they were able to produce a highly impressive display that would have ripped apart a side less defensively adept than Spurs. And they could have yielded at least a point but for an error from the officials.

Aubameyang thought he had made it 2-2 with a brilliant finish on the half-volley near the back post but was denied by the assistant's flag, lifted in response to a group of retreating team-mates, not the Gabon forward.

Aubamayeng also had a low shot from inside the box saved by Lloris and Christian Pulisic slid an effort wide for Dortmund, who claimed 67% of possession but came away with no points.

'Sometimes you have to play a different way' - What they said...

Spurs boss Mauricio Pochettino on BT Sport: "It was so important to win; we are so happy.

"It was so important to start well in a tough game. Dortmund played really well, they dominated the first half. We increased our level in the second half and we were very clinical in front of goal.

"It is more than three points. At half-time we fixed some problems and modified the position of some players. The tempo of the game decreased which was better for us. Dortmund are a very aggressive team, we struggled a little to pass the ball quickly.

"Sometimes you can't dominate, you have to play a different way and the team is more mature now. We can learn a lot from this game.

Harry Kane on BT Sport: "It's a massive win. Nights like this at Wembley, we have to take advantage of it. Last season our downfall was the games at home. It was a more experienced performance from us tonight.

"In the Champions League you have to be smart. You can't always press teams on a big pitch. We took advantage on the counter-attack and exploited the space they left in behind."

Son haunts Dortmund again - the stats you need to know