Wales have climbed from 18th to 13th place in the Fifa world rankings after World Cup qualifying wins over Moldova and Austria in September.

The improvement could mean Wales have a favourable seeding if they face a play-off to reach the finals in Russia 2018.

But British bragging rights are less significant than the potential impact on their World Cup qualifying chances.

If Wales reach the play-offs, their world ranking will be important because it will decide if they are seeded or not. 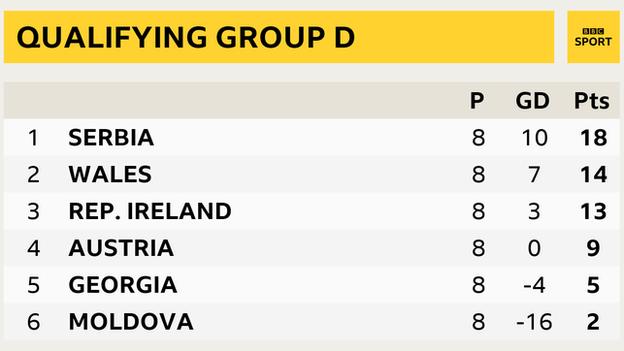 The draw for the play-offs takes place on 17 October, based on the Fifa world rankings updated a day earlier.

When the draw for the play-offs is made, the eight teams will be separated in two pots with the four highest-ranked teams seeded in one pot.

Being seeded does not affect when teams play their play-off legs home and away, but it would mean Wales avoiding other seeded teams such as Portugal and Italy.

Wales' remaining qualifying matches are against Georgia away on 6 October and Republic of Ireland in Cardiff three days later.

Wales have made a virtue of Fifa's world rankings system in recent years, peaking at the right moments and being selective with their friendly matches to protect their ranking points.

Reaching an all-time high of eighth place in 2015 saw them start this World Cup qualifying campaign as their group's top seeds, and this latest climb is very timely.

Although Wales are unbeaten in their group, their chances of qualifying automatically are all but over so their best hope of reaching next year's tournament in Russia is via the play-offs.

They are currently ninth-ranked among the teams in the runners' up positions in qualifying groups.

Today's ranking is not final for Wales but it is a strong indicator of their chances of being one of the top four seeds if they make the play-offs.

That would mean avoiding giants such as Italy and Portugal and, with future campaigns in mind, this latest rankings surge could have longer-term benefits for Wales as well.