World champions Germany have replaced Brazil at the top of the Fifa world rankings after the latest round of 2018 World Cup qualifiers.

England have fallen two places to 15th, with Wales moving up five places to 13th, replacing Gareth Southgate's side as the highest-ranked UK team.

Northern Ireland have reached their highest ever position of 20th, while Scotland have risen 15 places to 43rd.

England have dropped to their lowest ranking since June 2015, despite consecutive qualifying wins over Malta and Slovakia earlier this month. 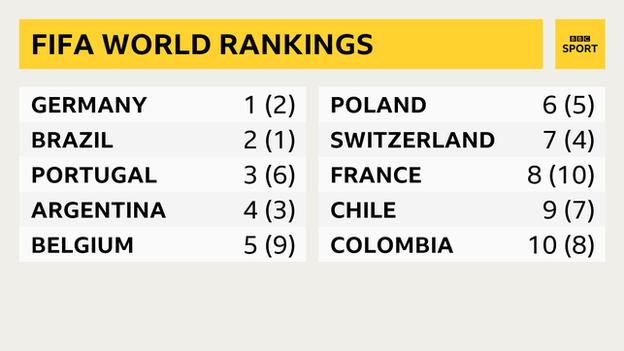 Cape Verde are the highest climbers, moving up 47 places to 67th after back-to-back victories over South Africa in September.

Following their goalless draw with France, Luxembourg have risen 35 places to 101st and are one of four teams to reach their highest ever ranking, alongside Northern Ireland, Peru (12th) and Syria (75th).

Guatemala are the biggest fallers, tumbling 31 places to 131st, while Austria - who lost to Wales and drew with Georgia this month - drop 20 spots to 57th.

Fellow Group D side Republic of Ireland have fallen five places to 34th following a draw with Georgia and defeat by Serbia.

The next Fifa world rankings will be released on 16 October.