Everton manager Ronald Koeman said he was at fault after his side's Europa League defeat by Atalanta in Italy on Thursday.

The Toffees lost 3-0 against the Serie A side, with all the goals coming in the first half.

"I need to criticise myself because the team were not prepared for this tonight and that's a question to myself," he told BT Sport.

Goals from Andrea Masiello, Alejandro Gomez and Bryan Cristante gave the home side a comfortable victory in their opening Group E game. 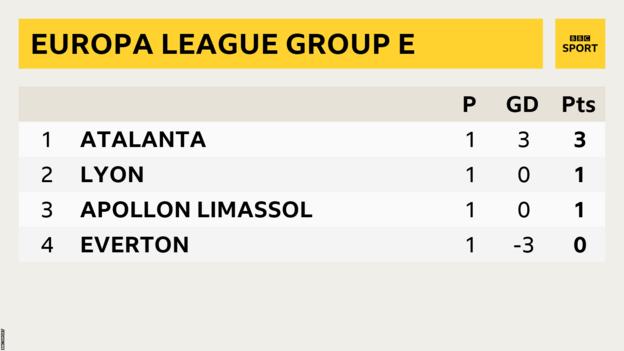 'I asked myself questions'

Everton were coming off the back of a 3-0 home loss to Tottenham in the Premier League on Saturday, a result which prompted to the Dutchman to say his team were "too nice."

After Thursday's defeat, Koeman said: "I asked myself questions on what I was doing wrong against Tottenham, because it's not how I like to see my team.

"We can play bad football, we can miss chances, but the commitment and passion Atalanta showed in the first half was much bigger than we showed."

Atalanta were playing their first game in Europe since losing to Inter Milan in the 1991 Uefa Cup quarter-finals, and Koeman was full of praise for the side that finished fourth in Serie A last season.

"The whole team of Atalanta was better prepared than we were today," he said.