There is a new prolific Premier League strike partnership on the prowl.

Manchester City's free-scoring front men have started the season brilliantly - but how do they compare to the deadliest partnerships in the history of the league?

In contrast, teams in London cannot find the net, while the weekend games suggested that possession does not necessarily equal points.

BBC Sport analyses the most interesting statistics from the latest action in the Premier League.

With the evolution of false nines, inverted wingers and hard-working solo forwards, it appeared the days of traditional Premier League strike partnerships were behind us.

And when Gabriel Jesus arrived at Manchester City from Palmeiras last season, Pep Guardiola said he intended to play the young Brazilian in a wide role.

But while the 20-year-old has since impressed his boss as a "nine", he has stiff competition for that spot from Sergio Aguero, who has scored 175 goals since joining City in 2011.

Guardiola's solution? Play them both. It has proved an inspired choice.

"We scored a lack of goals last season so we thought that maybe they should play together," Guardiola told BBC Sport after his side hammered Watford 6-0 on Saturday, with Aguero netting a hat-trick and Jesus also on the scoresheet.

BBC Sport football analyst Garth Crooks says the South American duo remind him of a partnership formed on the other side of Manchester.

"Aguero and Jesus are looking formidable together and developing a striking partnership I've not seen since the days of Dwight Yorke and Andy Cole, and we all know what they accomplished," said former Spurs forward Crooks.

Cole and Yorke scored 53 goals between them in all competitions as Sir Alex Ferguson's side won the treble in 1998-99, but how do Aguero and Jesus compare to that pair as well as the Premier League's other most prolific partnerships?

Didier Drogba's 29 goals as Chelsea won the title in 2010 was an outstanding individual effort, while Cristiano Ronaldo, Wayne Rooney and Carlos Tevez hit 57 as an attacking trio in Manchester United's 2007-08 league-winning campaign.

But Manchester City have returned to what these days must be considered an old-fashioned front two, and in the eight games in all competitions that Jesus and Aguero have started together, the pair have scored 16 goals.

They have netted nine between them in City's opening five Premier League games, and if they continued to score at that rate they would contribute almost 70 goals this season.

In a BBC Sport poll, 29% of voters thought York and Cole were the best Premier League strike force.

Manchester City have found the net 16 times so far this campaign after inflicting Watford's heaviest ever defeat in the top flight to make it 11 goals in their past two trips to Vicarage Road - more than the Hornets (10) have scored in their last nine games at their home ground.

It was only the second time a team have scored 11 goals without reply in consecutive top-flight away games, with Liverpool's 6-0 and 5-0 wins over West Brom in 2003 and 2004 the other occasion.

City have 13 points from their opening five games - a home draw against Everton their only blip - but Guardiola has warned his side not to get carried away after they won their opening six games last season but failed to clinch the title.

It is worth noting too, that none of the sides shown in the graphic above went on to win the league in the same campaign.

It chalked up a joint-record 34th victory against Everton for United in the competition.

And when Anthony Martial tucked away a stoppage-time penalty to make it 4-0, it meant United had also scored more goals against the Toffees in the Premier League than any other side.

It was the Old Trafford club's 96th goal in the competition against the Merseysiders, overtaking Arsenal in scoring more against one club than anyone else.

Who was the Gunners' record against? Sorry, Toffees fans... you know the score.

The goals may be flowing for the Manchester sides, but fans of their rivals in the capital had not a single one to cheer this weekend.

Crystal Palace, Tottenham, Watford and West Ham all failed to find the net on Saturday, before Arsenal and Chelsea drew 0-0 at Stamford Bridge on Sunday.

The Gunners have not won at a "big six" Premier League club since beating Manchester City 2-0 in January 2015, but perhaps more worrying for Arsene Wenger is the fact his side have failed to score in three of their opening five games for the first time in 19 years.

They did, at least, stop Chelsea finding the net at home for the first time under Antonio Conte, with the Blues last failing to score in a competitive match during a 3-0 defeat by Manchester City in April 2016 when managed by Guus Hiddink.

No possession, no problem 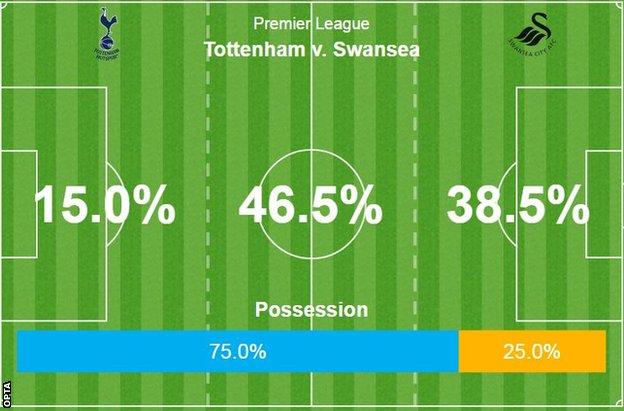 They say possession is ninth-tenths of the law, but that old adage meant little to Tottenham as they shared the points with visiting Swansea at Wembley.

It was Spurs who then-Chelsea manager Jose Mourinho accused of "parking the bus" back in 2004 when they forced a 0-0 draw at Stamford Bridge, but it was the Welsh side who rolled in the double deckers on Saturday - and to great effect.

Almost 40% of the game was played in the Swans' defensive third as they stopped Mauricio Pochettino's side from scoring at home in the Premier League for the first time in 30 games.

But Tottenham are not the only side to have enjoyed so much of the ball for so little reward. Just ask Liverpool.

One irate Liverpool supporter tore into manager Jurgen Klopp after the Reds drew 1-1 with Burnley at home despite dominating possession, calling the German "the biggest clown of the lot" at "circus" Anfield.

Mohamed Salah's smart finish proved the only time Liverpool could break through a resolute Clarets defence, despite having 35 shots on goal.

Only three times since Opta began recording stats in the 2003-04 season has a side had more shots and not won the game, with each ending in a draw.

Burnley make their way on to that list for a second time by virtue of frustrating Manchester United at Old Trafford when they soaked up 38 shots without conceding in October last year.

Arsenal are the side to have had the most shots in a Premier League game and lost, producing 35 efforts without finding the net in a 1-0 defeat by West Ham in April 2007, when Bobby Zamora was the match winner.

For Burnley, Saturday's 1-1 draw was the first point they have earned in a league match at Anfield since a 1-0 win in September 1974 and the first time the Clarets have scored in consecutive league games there since August 1969.

So were there any positives for Klopp? Well, Liverpool have at least secured a top-four finish in one table... sides to reach 1,000 points from Premier League home games.

Getting his new side to score a goal is the former England boss' first priority, after the Eagles became the first side in top-flight history to lose their opening five games without finding the net.

A 1-0 defeat by Southampton at Selhurst Park saw Palace surpass the 438 minutes Newcastle went without a goal at the start of the 2005-06 season.

Hodgson may, however, take inspiration from the Ipswich side of 1970-71, who failed to score in their opening five games but still managed to beat the drop.

Next up for Hodgson and Palace in the league? Manchester City away, Manchester United away, Chelsea at home.