England ensured they ended their World Cup qualification campaign unbeaten with victory in Lithuania - but it was another poor performance only rescued by Harry Kane's first-half penalty.

Manager Gareth Southgate gave debuts to Tottenham's Harry Winks and Leicester City defender Harry Maguire and also experimented with a three-man central defence after their place in Russia was confirmed by Thursday's win against Slovenia at Wembley.

Winks impressed, almost scoring in the second half, and there was a heavy Spurs influence in the game's decisive moment after 27 minutes as Dele Alli was fouled, leaving Kane to score, as he has done in each of his four games as England captain.

If Lithuania had a striker anywhere near Kane's calibre they would have severely embarrassed England as several clear chances were missed, while keeper Jack Butland spared the blushes of his own defender Michael Keane when he saved superbly from the defender's miscued clearance after the break.

England's win here in Lithuania was built on the template for their World Cup qualifying campaign - job done but little or no inspiration and nothing to strike fear into any potential opposition in Russia next summer.

There should have been an urgent edge to this England display, with World Cup places for up grabs and Southgate in the mood to explore all options as he made seven changes from the team that secured the place in Russia with victory against Slovenia.

Instead, England were the same pedestrian team that have at times made such heavy weather of some very average opposition in Group F.

Winks did impress, Marcus Rashford offered flashes of hope and Kane was on the mark - but these were very small shafts of light in another poor performance.

Southgate and England can congratulate themselves on negotiating this group with eight wins and two draws from 10 games.

But although the statistics are impressive, the actual performances were not. And they were results England should have got, given the favourable hand they were dealt in the qualifying draw.

England can now move forward to Russia - but not too many supporters will be getting their hopes up on this unattractive evidence. 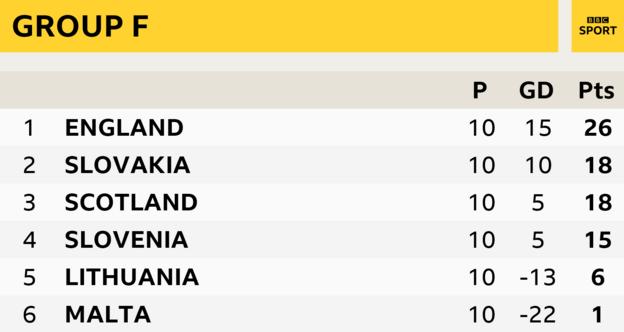 It says as much about England's lack of creative midfield options as it does about his own promise that Tottenham's Winks found himself making his international debut after only four Premier League starts for his club.

England are one dimensional in that area with Jordan Henderson and Eric Dier as the current first choices, so there is an opportunity for someone to give manager Southgate a decision to make, especially with Liverpool captain Henderson so poor again.

And Winks made a decent first impression amid the mediocrity of so much of this match, neat in possession, competitive in the physical challenges and never looking uncomfortable in the international environment, irrespective of the standard of the Lithuanian opposition.

Winks stood out because he was at least urgent in possession. He caught the eye because so many of his colleagues were not.

Southgate waited until England had qualified for the 2018 World Cup before tinkering with the formation he had favoured, deciding to use a three-man central defence in Vilnius.

Everton's Michael Keane, Leicester City debutant Maguire and Manchester City's John Stones were the guinea-pigs here - and it was not a night without anxieties as Lithuania troubled England on occasions.

Southgate hinted he is ready to use the formation again and it may just give England another string to their bow when the action starts in Russia next summer.

England have the perfect opportunity to test its effectiveness, and the men Southgate believes are best employed within it, against high-class opponents when World Cup holders Germany and Brazil visit Wembley for friendlies in November.

These games could prove an acid test for the three-man system. If it proves successful there will be real temptation to consider using it in Russia.

Man of the match - Harry Winks

'It is going to have to be better than this' - analysis

England win, with a few tidy performances, but there was nothing spectacular and nothing to write home about. It was an opportunity missed for a lot of these young players.

'I was very pleased with Harry Winks'

"We obviously gave three full debuts and an opportunity to some players that we wanted to see," said England coach Gareth Southgate.

"I think that also kept the motivation of the team high. There were enough players with a point to prove.

"In many aspects we moved the ball quite well. I was very pleased with Harry Winks in that respect.

"For me, one of the big things when you play for England isn't necessarily the opposition, it's whether you can handle wearing an England shirt.

"I thought he did that in a really accomplished way.

"We just lacked a bit of quality around the final third and it has been a familiar theme in this qualification campaign, really."

'One of our best performances'

"The players gave their all on the pitch," said Lithuania head coach Edgaras Jankauskas.

"Looking at history it is our best game against England in terms of realising our tactical plan.

"The first half was actually one of the best we played in this campaign. The players showed how much they can do.

"It's just a pity we couldn't take our chances. We had nine shots and I had a feeling that the goal was coming."

636 comments
Back to top
unknown