Manager Pep Guardiola hailed Manchester City's thumping win over Stoke as the team's finest display since he became manager as his side opened up a two-point lead at the top of the Premier League.

Belgium midfielder Kevin De Bruyne was sensational, providing two assists and one of the passes of the season that led to the second goal as Guardiola's men returned from the international break to treat the home support to a stunning performance.

"I am happy for the victory, we had to focus after the international break, to start well," said the Spaniard, who joined the Citizens at the start of the 2016-17 campaign.

"We didn't lose easy balls, we play fast and simple. That's why I am very pleased. It is the best performance since I came here."

Stoke boss Mark Hughes added: "They were quicker, stronger and anticipated things far quicker than us, and in the end we had no answers to the questions they posed to us."

City scored three times in the first period and had 83.5% of the possession in what was arguably the most one-sided Premier League half this season.

Gabriel Jesus was the first to find the net when he nipped in ahead of Mame Biram Diouf to prod home. De Bruyne then threaded a 'no-look' pass into the path of Leroy Sane, who fed Raheem Sterling to slot in.

It was 3-0 by the 27th minute when Spain midfielder David Silva fired home after more good work from Sterling and Sane.

The only surprise of the first 45 minutes was when Diouf's deflected shot reduced the deficit.

We all feel lucky to have him in our team

The home side then received another jolt when the Senegal player's header came off the leg of Kyle Walker, hit the post and beat Ederson in goal two minutes after the restart.

Any hopes of a fightback, though, were quashed when Jesus smashed in his second from close range via another beautiful De Bruyne delivery.

Fernandinho then produced the goal of the game with a rocket from 25 yards that whistled past Jack Butland in goal.

Belgian De Bruyne's magic then allowed Sane to slot in the sixth before substitute Bernardo Silva completed the rout when he converted Sterling's pass. 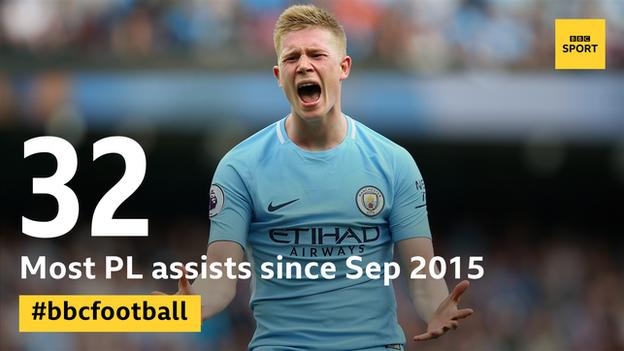 And so the eulogies continue to accumulate for a midfielder who must already be one of the front-runners for the player of the season award.

De Bruyne had been playing in a deeper role in recent matches but against Stoke it looked at one stage that the home side were made up of a team De Bruynes - he appeared everywhere.

Having been involved in the build-up for the first, the Belgian brought the home support to its feet when his Ronaldinho-esque pass found its way to Sane, who then squared the ball to Sterling for 2-0.

And when City's lead was cut to a goal after the break, De Bruyne eased the jitters with an assist for Jesus who slammed in the fourth.

The sublime pass for Sane for 6-2 was even better - slotted through a group of Stoke players to find his man.

De Bruyne told BBC Sport: "We play in a flow at the moment - we are playing well. Not just me.

"It looks wonderful to see the goals - it's not an individual action.

"I'm very happy because we're winning the games at the moment. I'm going with the level of the team, which is very high at the moment."

What they said about De Bruyne:

Manchester City manager Pep Guardiola: "He is one of the best by far, he is someone who produced a lot of actions."

Goalscorer Gabriel Jesus: "I'm really happy and pleased to be playing with high-level players like him. We all feel lucky to have him in our team."

Stoke boss Mark Hughes: "His quality throughout was absolutely sensational to be perfectly honest - for me he is the best player in the Premier League by a country mile."

Just before the break, Manchester City manager Pep Guardiola suggested, inadvertently or otherwise, that title rivals Tottenham were a one-man team because of Harry Kane's goals this season. He has scored 13 of their 22 goals in all competitions this season.

The equally invaluable Aguero was City's leading scorer coming into match but on Saturday the league leaders showed they are a team of many superheroes, as the Argentine sat on the bench.

Both Sterling and Jesus were dazzling and have now scored seven goals apiece - the same total as the Argentine - while fast-improving Sane, who has played fewer minutes than the trio, has found the net six times.

Which team will be able to slow down this juggernaut?

'It was far too easy for Man City' - the reaction

Stoke manager Mark Hughes: "I have to say, the first half we were way off the levels we needed to be at - we didn't defend good enough and it was far too easy for them.

"As a consequence of that we were three goals behind midway through the first half, which when you come to places like this you simply can't allow to happen.

"We got a goal back before half-time and we made a couple of changes just to try and stem the flow."

Manchester City face Napoli at home in the Champions League on Tuesday (19:45 BST) and are at home to Burnley next Saturday (15:00 BST).

Once Stoke have licked their wounds they will be at home to Bournemouth, which is also next Saturday (15:00 BST).