Spread over 1,800 miles from the exclave of Kaliningrad on the coast of the Baltic Sea to Ekaterinburg, at the base of the Ural mountains, 12 stadiums across Russia will host the 64 matches that comprise the 2018 Fifa World Cup.

The largest venue is also one of the newest - with the 81,000-capacity Luzhniki Stadium only reopened in 2018 on the site of the old ground in Moscow.

It is here that the first game will be held on 14 June and also the final, 31 days later. 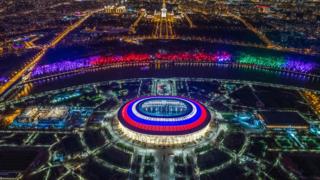 Location: Russia's capital city, Moscow, is situated on the Moskva River in the west of the country. The stadium is in parkland in a bend of the river, roughly six kilometres south west of the city centre.

Background: The Luzhniki Stadium, initially named the Central Lenin Stadium, has witnessed both triumph and horror. It was constructed in just 450 days between 1955 and 1956 - a reflection of the growing ambitions of the then Soviet government after the Union's athletes had returned from their first Olympics, in Helsinki in 1952, with 71 medals.

With an initial capacity of just over 100,000, the stadium was the central venue of the 1980 Moscow Olympics. It was here that Allan Wells took 100m gold for Great Britain and Steve Ovett and Sebastian Coe staged their now legendary tussles over both 800m and 1500m. However, tragedy struck two years later when 66 people died in a rush for the exit during the closing stages of a Uefa Cup match between Spartak Moscow and Dutch side HFC Haarlem.

Extensively renovated during the 1990s, during which it was renamed Luzhniki (which is a rough translation of the Russian word for 'meadows' and refers to the flood meadows on the bend of the Moskva River where the stadium is built), it has since hosted the 1999 Uefa Cup final, in which Parma defeated Marseille, and the 2008 Champions League final, which saw Manchester United beat Chelsea on penalties.

During redevelopment work for the 2018 World Cup, the stands were divided into two tiers and the athletics track removed, with the exterior of the stadium preserved. This summer, it will become the fifth stadium to have hosted the finals of the World Cup, the European Cup/Champions League and featured as a main stadium of the summer Olympics. 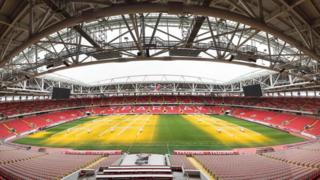 Background: Spartak Stadium (which is its official title during the World Cup, changed from the Otkritie Arena) is the first permanent home of 22-time Soviet/Russian champions Spartak Moscow. Prior to its opening in 2014, Spartak played in a number of different venues in Moscow, including the Luzhniki.

Situated on the site of Moscow's former airfield in the district of Tushino, the stadium hosted its first match on 5 September 2014, in which Spartak drew 1-1 with Red Star Belgrade.

The exterior design of the stadium features hundreds of connected diamonds, reminiscent of chainmail. These are coloured the red and white of Spartak but can be changed to reflect the teams playing. 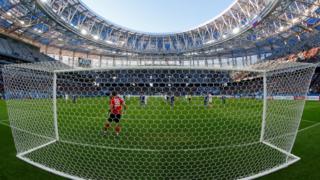 Location: The administrative centre of the Nizhegorod oblast (region), Nizhny Novgorod lies to the east of Moscow at the confluence of the Volga and Oka rivers.

Background: Inspired by the aspects of nature in the Volga region, in which it is situated, the Nizhny Novgorod Stadium draws on wind and water in its circular design. This is embodied in what Fifa describe as a "semi-transparent undulating facade". Like all good modern stadiums, it also lights up at night.

Situated on a site in central Nizhny Novgorod, on the west bank of the Volga River where it merges with the Oka, construction on the stadium began in 2015. FC Olimpiyets Nizhny Novgorod, the club who stand to inherit the ground after the World Cup, were formed in the same year, out of the ashes of the dissolved FC Volga Nizhny Novgorod. 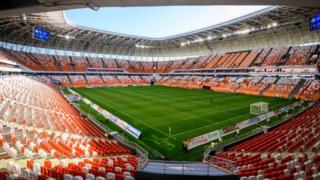 Location: Saransk is south east of Moscow, the capital of the Republic of Mordovia and situated in the Volga basin at the confluence of the Saranka and Insar rivers.

Background: With its planned orange, red and white exterior, Mordovia Arena promises to be one of the most colourful venues for the 2018 World Cup. Located in the centre of Saransk, on the bank of the Insar river, ground was broken in 2010, on the 1,000th anniversary of the unification of the Mordovian people with Russia's other ethnic groups. Numerous delays, largely because of a lack of funding, meant it was not finished until late 2017.

It will initially have a capacity of 45,000 for the World Cup, which will be brought down to 28,000 after the event by removing the upper tier and turning it into a walking concourse. It will then host FC Mordovia Saransk of the Russian Premier League, replacing their Start Stadium. 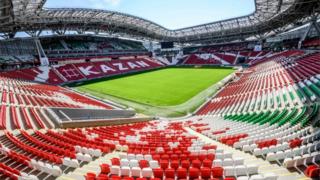 Location: The capital and largest city of the Republic of Tatarstan, east of Moscow, Kazan lies at the confluence of the Volga and Kazanka rivers in European Russia.

Background: If the Kazan Arena has a familiar look to it, there is a good reason. The stadium was designed by the same firm of architects that oversaw the new Wembley and Arsenal's Emirates Stadium. This is on a smaller scale than the two London-based stadiums, housing just under 45,000 people, but remains impressive nonetheless.

Completed in July 2013 to serve as the main venue of that year's Summer Universiade (an international multi-sport event for university athletes), the ground has since been used as the home of Rubin Kazan.

It might also be the most versatile venue at this summer's World Cup, having also hosted some of the competitions at the 2015 World Aquatics Championships, for which the football pitch was replaced by two swimming pools. 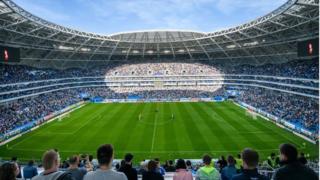 Location: Situated in the south-eastern part of European Russia at the confluence of the Volga and Samara rivers on the east bank of the Volga.

Background: If all had gone according to the initial plans, the Samara Arena would have been situated on a near-deserted island to the south of the city. After much criticism and some common sense, the venue was relocated north and inside city limits.

With its dome structure, metallic look and capacity to light up at night, it is designed around the theme of space to reflect the region's renowned aerospace sector. It will even be called Cosmos Arena once the World Cup is over. It will then become the new home of local side Krylia Sovetov, replacing their current Metallurg Stadium. Location: Russia's fourth largest city, Ekaterinburg is on the geographical borderline of Europe and Asia, at the foot of the Ural mountains. It is the most eastern stadium to be used in the World Cup. However, to give an indication of the size of Russia, it is around 4,590 miles from the city of Vladivostok on the east coast.

Background: Many of the 2018 World Cup venues have unique design elements, but only one has stands erected outside the stadium. The Ekaterinburg Arena is a testament to the notion of necessity being the mother of invention. Nominated as a host city, Ekaterinburg was faced with the dilemma of how to satisfy Fifa's stipulation that venues house a minimum of 35,000 people. Cue some imaginative architects, who came up with the idea to incorporate temporary extra seating on the outside of the stadium perimeter, behind both goals. The Soviet neo-Classical pillars that line the main entrance will remain.

Initially known as Central Stadium, it was originally built between 1953 and 1957 and redeveloped between 2007 and 2011. It is the home of Russian Premier League side Ural Ekaterinburg. 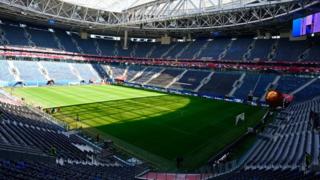 Location: Situated on the Neva River, at the head of the Gulf of Finland on the Baltic Sea, it is the most northerly venue.

Background: The Krestovsky Stadium, or Zenit Arena, by day, will become the St Petersburg Stadium during the World Cup. Ground was broken in 2007 for its construction, which was due to be completed in 2009 but suffered a number of delays, including a redesign to comply with Fifa requirements. After initial backers, Russian gas firm Gazprom, pulled out of the project, it was taken over by the St Petersburg city government, with work finally completed in 2017 in time for the Confederations Cup. Original costs were meant to be around $250m (£190m) but reports suggest this to now be at least three times that amount.

Built from Kisho Kurokawa's 'The Spaceship' design, it is a scaled-down version of the same designer's Toyota Stadium in Toyota city, Japan. Equipped with a sliding pitch and retractable roof, the stadium is one of the most technologically advanced in the world.

The stadium will be home to Russian club side Zenit St Petersburg and is also scheduled to host three group-stage matches and a quarter-final in Euro 2020. 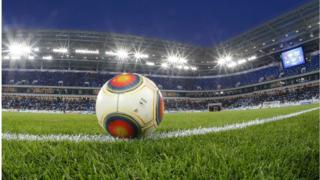 Location: Kaliningrad is the administrative centre of Kaliningrad oblast, a Russian exclave situated on the Baltic Sea, sandwiched between Poland to the south and Lithuania to the north and east.

Background: Loosely based on the design of Bayern Munich's Allianz Arena, the newly-built Kaliningrad Stadium has been plagued by delays and difficulties, including the the bankruptcy of the company responsible for its initial design. It was initially conceived as a 45,000-seat stadium with a retractable roof. However, this had to be scaled back to the more modest, roofless 35,000 venue that will host four group matches in the 2018 World Cup.

After this summer's tournament, the stadium will have 10,000 seats removed and become the home of Russian second-tier side Baltika Kaliningrad, whose average attendance last season was just short of 3,500. 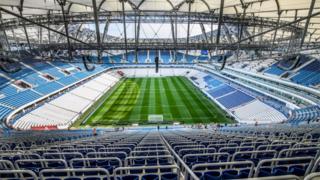 Location: Formerly Stalingrad, it is situated in south west Russia, on the western bank of the Volga River.

Background: Another purpose-built stadium for the World Cup, the Volgograd Arena has been constructed on the site of the demolished Central Stadium, which had been there since 1958.

With its meshed, lattice-like exterior and cabled roof, it is one of the more distinctive venues for the competition. According to the Fifa website, "the special way in which the stadium's roof has been constructed, with cables reminiscent of the spokes of the wheel on a bicycle, lends the arena an extra element of airiness".

After the World Cup, the stadium will be reduced to 35,000 capacity and will become the new home of Russian top-flight side Rotor Volgograd. 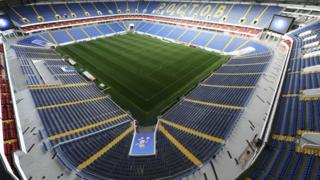 Location: Situated south of Moscow on the Don River, 20 miles from the Sea of Azov.

Background: Another new stadium, groundbreaking began in 2013, during which intact shells from World War II were found. Completion was delayed from late 2017 to 2018.

Situated on the southern bank of the Don River, the stadium is planned as the start of a new city centre, with the rest of the city lying north.

FC Rostov, the 2014 Russian Cup winners, will play its home games at the stadium following World Cup, with the capacity reduced to 25,000. 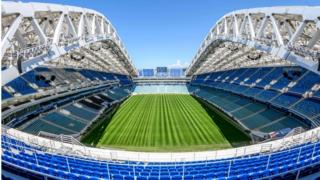 Location: Situated on the coast of the Black Sea, Sochi stretches for 140km, making it the longest city in Europe - second in the world behind Mexico City. Sochi is the most southerly venue for the tournament and also set against the backdrop of the Caucasus mountains.

Background: The Fisht Stadium was built as the centrepiece venue for the 2014 Winter Olympics in Sochi, which helps explain its unique sloping look, designed to resemble snowy peaks. The Fifa website states that "Fisht Stadium was originally named after Mount Fisht, a peak in the Caucasus range of mountains. In the local language, Adygeyan, 'fisht' means 'white head'."

The two ends of the venue were previously open, allowing a view of the Krasnaya Polyana mountains to the north and the Black Sea to the south. But these have been filled with temporary seating for the World Cup, in order to boost capacity to Fifa stipulations.