The Canaries, sixth in the second tier, had chances to make it 2-0, but Macey pushed away Nelson Oliveira's curled effort with Murphy and Mario Vrancic also missing chances.

Those misses proved crucial as Nketiah grabbed a late equaliser from close range only 15 seconds after coming on to leave it level after 90 minutes.

I'm impressed to think that he was not even conceived when I was already here!

The England Under-19 international then headed in from Mohamed Elneny's corner for the winner.

The 18-year-old former Chelsea youth player is the first player born since Wenger started his reign as Arsenal boss in 1996 to score for the club.

"I brought him on because we needed to score goals and he can score goals. In the end we had eight strikers on the pitch," said Wenger.

"I knew he had quality, but when the team need you and you deliver, that's another quality you don't know about until you go on to the pitch.

"I'm impressed to think that he was not even conceived when I was already here! But it's good as well because life gives chances to young people. Hopefully he'll have a long career at Arsenal.

"We're proud to give chances to young players, it's part of our DNA, and we want to continue to do that.

"I don't know why exactly Chelsea let him go or if he decided to leave, but young players more and more nowadays travel from one club to another. We're happy to have him.

"I can't remember a young player having such an impact in a game like that. Until he came on we lacked ideas and creativity."

Arsenal, who made 11 changes to the team that won 5-2 at Everton on Sunday, have never won this competition in the 21 years that manager Arsene Wenger has been at the club.

Although the Arsenal team was completely different to the side that won at Goodison Park, they still fielded internationals Mathieu Debuchy, Elneny, Jack Wilshere, Theo Walcott and Olivier Giroud.

However, Wenger's selection looked to have backfired as Norwich went ahead and then had chances to extend that advantage further.

The Canaries, hoping to reach the last eight of the competition for only the second time in 22 seasons, were also unhappy that Elneny was only booked when he fouled Oliveira as he was through on goal.

But Nketiah, who had replaced Reiss Nelson seconds before, grabbed an 85th-minute equaliser after a corner from the left was flicked on by Francis Coquelin.

The second goal for the hosts came in the 96th minute through a powerful Nketiah header from Elneny's fine delivery.

Nketiah had a chance for a hat-trick, but Angus Gunn produced a fine save.

Even though Canaries wanted a late penalty after Debuchy clashed with James Husband, Arsenal held on.

The draw for the quarter-finals will take place at 16:00 BST on Thursday, 26 October.

Who is Edward Nketiah? 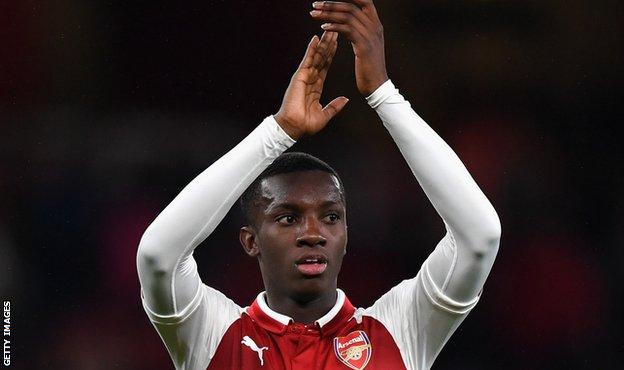 These were Nketiah's first goals for the club in only his second appearance. His first was as an 89th-minute substitute in the 4-2 away Europa League win over Belarusian side Bate Borisov on 28 September.

The Londoner began his career on Chelsea's books but was released at under-14 level in 2015 and joined the Gunners later that year.

The forward has also represented England at Under-18 and Under-19 level and his pace, direct running and heading ability caused a tiring Norwich defence problems at Emirates Stadium.

Nketiah has scored hat-tricks for two different England age-group teams in 2017, for the Under-18s in a 4-0 away win against Qatar in March and the Under-19s in a 7-1 victory over Poland in September.

He has got his chance for Arsenal's first team this season after scoring 24 goals in the Gunners' various youth teams in each of the last two seasons.

Current team-mate Alexandre Lacazette has been impressed with the youngster and told arsenal.com: "I really like Eddie, he is very calm in front of goal and has great technique."