A new points record, more top-flight wins than ever before, a points gap between first and second that had never been seen before.

It is a different season, but the records keep tumbling and with a 4-0 win over St Johnstone, Celtic surpassed their own British domestic unbeaten standard.

Willy Maley's side went 62 league games unbeaten - pre-League Cup and during a Scottish Cup wartime hiatus - between 1915 and 1917, but Rodgers and his side have supplanted them in the history books.

And yet the seed for this record was planted by Rodgers' predecessor, Ronny Deila. 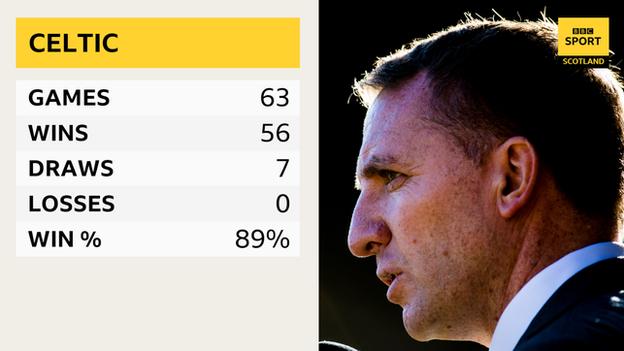 The Norwegian's final match in charge of Celtic was a 7-0 thrashing of Motherwell in May 2016 - game one of 63.

Just four days earlier, Graham Cummins had capitalised on a misunderstanding between Efe Ambrose and Logan Bailly to give St Johnstone victory over the already crowned champions.

It was Celtic's last defeat by a Scottish side, so how fitting that the same opponents, at McDiarmid Park, were beaten to overcome a long-standing record.

It also stations Celtic in the company of some of European football's most illustrious teams. 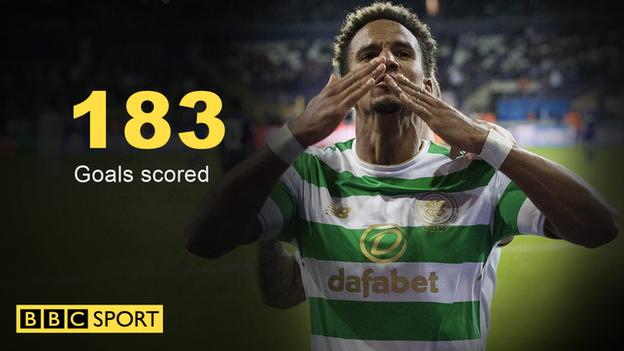 The legendary AC Milan sides of Arrigo Sacchi and Fabio Capello went 58 unbeaten in the early 1990s; the Olympiacos team of the 1970s managed similar and the dominant Benfica side of the 1970s two fewer than that.

Game 62 - a draw with Kilmarnock at Celtic Park - allowed the Scottish champions to overtake Arsenal's invincible side of 2003-2004 in league matches. Arsene Wenger's 49-game unbeaten record was ended at Manchester United.

Rodgers has swept aside domestic opponents with brutal aplomb.

Save for seven league draws, Celtic have played 63 domestic matches - 62 under the Northern Irishman - and won 56 of them, scoring four or more goals in 24 games and three or more in 32. 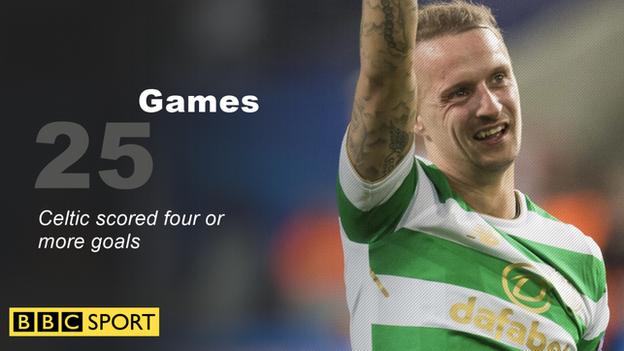 The aggregate scoreline for Celtic against the rest of Scottish football since the start of last season is 176-35, meaning they are scoring an average of just under three goals per game against Scottish clubs.

That just leaves Lincoln Red Imps (88), who defeated Celtic in Rodgers' first competitive game in charge, and the great Steaua Bucharest side of the late 1980s (104) ahead of the Scottish champions as they continue to chase records. 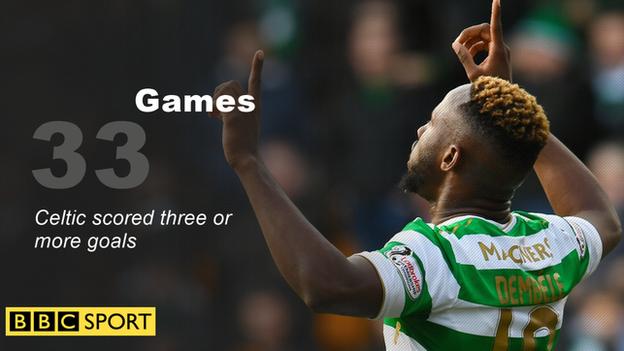 But while Maley's side have ceded a century-old British record to Rodgers' men, the latter will probably never win twice in a matter of hours.

Celtic defeated Raith Rovers 6-0 at home before travelling to Motherwell - on the same day - during their epic 62-game unbeaten run.

They won the second game 3-1. Now that is impressive.