Patrice Evra has thanked the "real Marseille fans" for backing him since he was suspended by the club for kicking one of their supporters.

The 36-year-old aimed an acrobatic kick at a Marseille fan at the side of the pitch before Thursday's Europa League match against Vitoria Guimaraes.

He will be interviewed before any disciplinary action is taken.

During Sunday's 5-0 Ligue 1 win over Caen, some Marseille fans unfurled a banner which read: "You thought you were above the institution OM and its supporters. We don't want you wearing our colours. Evra get out." 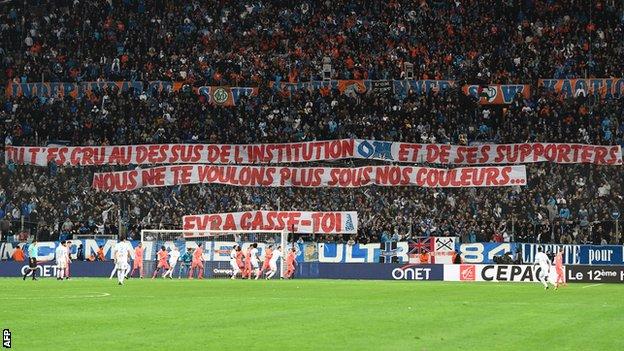 The France international was warming up before the start of Thursday's match when he became embroiled in the heated dispute, which led to him being sent off.

As he was a substitute, Marseille were permitted to begin the game, which they lost 1-0, with 11 players.

European football's governing body Uefa charged Evra with violent conduct on Friday, with the full-back suspended for "at least one game".

His former Manchester United and France team-mate Mikael Silvestre told BBC Sport Evra had "no future" at Marseille, but the incident would not be the end of his career.