Aston Villa boss Steve Bruce says the loss of too many key injured players is an explanation for their untimely tumble down the Championship table.

The loss of injured captain John Terry has triggered a drop from fourth to eighth in their five-match winless run.

Terry is now back in full training - but Villa lost top scorer Albert Adomah in the Boxing Day defeat at Brentford.

"You hope it won't derail you, but we're without our best players. And, when you need your big ones to do something and pull you out of the mire, they're not here."

On top of the 18th-minute loss of 12-goal winger Adomah with a stomach injury, Bruce is also without last season's top scorer Jonathan Kodjia and experienced striker Gabby Agbonlahor, who has been limited to just two starts this season.

But Bruce has at last been given good news about Terry, who has a chance of returning for new Middlesbrough boss Tony Pulis's first game in charge on Saturday. 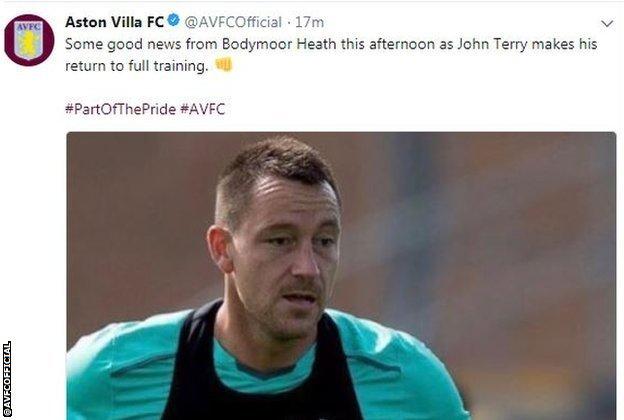 Bruce was still disappointed at the manner in which his side fell to defeat for the second year running in front of the live TV cameras at Griffin Park to boyhood Villa fan Dean Smith's Brentford.

"That was a kick where it hurts," he said. "I thought we'd seen the back of those days. But, if that creeps in we'll all get nowhere.

"We weren't aggressive enough, with or without the ball. We had nobody really wanting it enough.

"I'll take all the criticism that comes my way. I've been criticised all my life. But I'm determined we'll pull through it.

"I don't think it's a work-rate thing. It's just that, in the last couple of weeks in particular, we've made mistakes. And we found it very difficult against a very good Brentford side.

"I don't want any team of mine just crashing the ball forward. We've got to have some structure, not just get rid of it."