Alexis Sanchez scored his first goal for Manchester United as they comfortably beat Huddersfield to send the visitors into the Premier League's relegation zone.

After an uneventful first half, Romelu Lukaku gave United the lead on 55 minutes with a close-range volley.

Sanchez was then fouled by Huddersfield defender Michael Hefele to win a penalty and the Chilean, a January signing from Arsenal, stepped up to take the spot-kick.

The forward saw his low shot saved by Jonas Lossl, but made no mistake with the rebound to double United's lead on his home debut.

It was an emotional day at Old Trafford as United commemorated the 60th anniversary of the Munich air disaster with a minute's silence before kick-off.

With Premier League leaders Manchester City drawing 1-1 at Burnley in the early kick-off, second-placed United narrowed the gap to 13 points.

But it was a fifth successive league defeat for Huddersfield, who are without a win in eight league games and now sit 19th.

Manchester United manager Jose Mourinho revealed after the game that Belgium midfielder Marouane Fellaini has had knee surgery and is expected to return by the end of March.

Mourinho rang the changes after the 2-0 midweek defeat by Tottenham and the United team sheet raised a few eyebrows before kick-off.

Centre-back Phil Jones, who scored an own goal at Wembley, was dropped from the matchday squad all together, while 21-year-old midfielder Scott McTominay was preferred to £89m Frenchman Paul Pogba, who dropped to the bench for the first time since his return to the club in August 2016.

After the game, Mourinho said Pogba had not been benched as punishment and felt it had not been a "big call".

"To sit on the bench one day is not the end of the world," the Portuguese said.

"The intention is not to punish anyone. To punish someone I also need someone to punish me because we are a team. I made a few changes thinking about the characteristics of this game."

He added: "You have to open spaces by playing simple. That is why I played the kid [McTominay]. But Paul came on very well with a great attitude. No doubts for me, he is one of most talented midfield players in the world."

United felt they should have had a penalty after 20 minutes, when Terence Kongolo clattered McTominay in the area, but referee Stuart Attwell waved away their appeals and the youngster continued after receiving treatment.

Despite enjoying more than 76% possession, the home side lacked fluidity and creativity in the first half and failed to trouble Lossl, bar a long-range effort from Sanchez and an early attempt from Jesse Lingard.

Sanchez, making his third start for his new club, appeared to be getting more frustrated as the half wore on and he was booked for a petulant foul on Florent Hadergjonaj.

United started the second half with real purpose and deservedly took the lead when Juan Mata's cross was met by Lukaku for the Belgian's 19th goal since joining the club.

With 25 minutes to go, Pogba eventually came on and United soon had their second before the game petered out.

In addition to the three points which keep United above Chelsea and Liverpool in the race for second place, Mourinho will be happy with a 15th clean sheet in the league this season for David de Gea.

Worrying times for the Terriers

This performance was worlds apart from Huddersfield's 2-1 victory over United in October 2017.

They had defended admirably and frustrated United until Lukaku's breakthrough.

They tried to take the game to United on their rare counter-attacks but they failed to register a shot on target in the game and only one effort off target.

The Terriers were 11th in the table after the victory against United on 21 October, but have won only three times in the league since and taken just 12 points from a possible 51.

Upcoming games against fellow strugglers West Brom, Swansea, Crystal Palace and Newcastle will be key to their survival hopes. 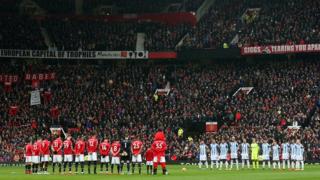 Players and fans observed a minute's silence before kick-off

Supporters observed a minute's silence before kick-off as United marked 60 years since the Munich air disaster.

Before the game, supporters were invited to pay their respects under the Munich plaque at the south-east corner of Old Trafford.

On 6 February 1958, a plane carrying Manchester United players and staff crashed at Munich airport with the club returning from a European Cup game against Red Star Belgrade.

On the actual day of the anniversary on Tuesday, there will be a service inside the stadium, with a minute's silence at 15:04 GMT - the precise time of the crash.

Man of the match - Alexis Sanchez

'We had to break down the Berlin Wall'

Manchester United manager Jose Mourinho told BBC Sport: "We always had control of the game, but at half-time it was 0-0. I guess we had around 85% possession in the first half but it was not enough. We kept doing the same in the second and even at 1-0 we were totally in control. Our defensive line was far from the danger areas.

"We had to be patient but had to keep the intensity high and the pressure. We had to break down the Berlin Wall organised so well by David Wagner.

"It was nice for Alexis Sanchez to win a match, the first at home. Nice for him to play well and show the desire and happiness in playing football. That is most important. It was not the goal of his dreams, but it is a goal.

"It is important for the bad reasons [Munich air disaster] but the memories stay. The club looks at the date and event as a key moment in the history of the club. It is nice to do that playing at home and winning."

Huddersfield Town manager David Wagner told BBC Sport: "It was a fair result, the better team won. We made it uncomfortable for them, we wanted to work and fight and stay together, that is what the players have done for a long period, but they used one of their chances and it was a deserved result.

"I have seen what I wanted to see, we will not have much of the ball and not create many chances, so I can live with what I have seen with the commitment and effort from the players. If we play like this, then I am sure we will see the results."

'I fear for Huddersfield' - analysis

Former England captain Alan Shearer on Match of the Day: "Alexis Sanchez made the difference. He was the player who had the drive, energy, pace and aggression.

"It wasn't a great performance from Manchester United but it was a very good one from Sanchez. He was dragging his team forward with the pace of his play. He got the little bit of luck his performance deserved with the penalty round. He was their best player without a doubt."

Former England midfielder Danny Murphy on Match of the Day: "Huddersfield have had a couple of tough fixtures. But they don't look like they're making any chances and we all know how important momentum is. There are other teams coming up around Huddersfield, and I fear for them."

United travel to St James' Park to face Newcastle on 11 February (14:15 GMT), while Huddersfield have an FA Cup fourth-round replay against Birmingham on Tuesday (19:45 GMT), before hosting Bournemouth in the league on 11 February (12:00 GMT).

Terence Kongolo (Huddersfield Town) wins a free kick in the defensive half.

Tommy Smith (Huddersfield Town) wins a free kick in the defensive half.

Attempt missed. Romelu Lukaku (Manchester United) right footed shot from the centre of the box misses to the left. Assisted by Antonio Valencia with a cross.

Penalty conceded by Michael Hefele (Huddersfield Town) after a foul in the penalty area.

Attempt missed. Romelu Lukaku (Manchester United) header from the centre of the box misses to the left. Assisted by Juan Mata with a cross.

Michael Hefele (Huddersfield Town) is shown the yellow card for a bad foul.

Chris Smalling (Manchester United) wins a free kick in the defensive half.

Jonathan Hogg (Huddersfield Town) is shown the yellow card for a bad foul.

Jesse Lingard (Manchester United) wins a free kick in the attacking half.

Goal! Manchester United 1, Huddersfield Town 0. Romelu Lukaku (Manchester United) left footed shot from the centre of the box to the bottom left corner. Assisted by Juan Mata with a cross.

Scott McTominay (Manchester United) wins a free kick in the defensive half.