Stoke manager Paul Lambert said he would not blame individuals after his side had a late penalty saved in a draw with Brighton at the Bet365 Stadium.

The relegation-threatened Potters were awarded a 90th-minute spot-kick when referee Bobby Madley judged Jese Rodriguez had been fouled by Dale Stephens.

Charlie Adam picked up the ball, prompting a frustrated Jese to complain about not being allowed to take it, and Adam's effort was saved by Brighton keeper Mat Ryan.

Seagulls defender Lewis Dunk reacted fastest to push the loose ball behind for a corner.

Lambert, whose side had cancelled out Jose Izquierdo's opener via a Xherdan Shaqiri strike in the 68th minute, said: "I'm devastated for the players.

"When you get a penalty in the last minute it's a big opportunity to win the game. But the penalty's a lottery, a hit or a miss.

"I would be more concerned if everybody shied away from a penalty and didn't want to take it.

"That's when the problems arise. But they wanted to take it. They wanted to win the game, which is normal, but they also want to score.

"Who is to say Jese would score? Nobody knows.

"I would never blame anybody. It is not a blame culture. We win as a team and we lose as a team.

"Charlie felt good because he scored the last one. He scored against Coventry [in the FA Cup last month] and has a great left foot.

"If you ask Charlie to put a ball anywhere he'll do it. It's just in that moment, the goalkeeper has made a save."

Brighton deservedly led a game in which they attacked with more fluidity, typified by Izquierdo's superb first-half opener after quick passing between him and Stephens.

But Shaqiri's sixth goal of the season sparked a fightback for Lambert's men, who also saw Mame Biram Diouf's header cleared off the line by Anthony Knockaert in added time.

The draw is not enough to move Stoke out of the bottom three and they remain 18th, with the Seagulls staying 13th.

Stoke must sharpen their attack

From the panic of trailing in a game against another bottom-half club, to the relief of levelling, the elation of a late penalty and finally despair at missing it.

Stoke and Lambert went through the emotional wringer during a game in which their faltering attack had them largely second best.

The Potters had more possession but missed a big opportunity to move out of the bottom three and go level on points with the Seagulls when that last-gasp penalty was saved.

The late flurry in added time came during a contest when Stoke's front three of Shaqiri, Eric Maxim Choupo-Moting and Diouf only touched the ball in Brighton's area a combined six times. They struggled badly to create good chances and work Ryan.

But it was not all negative; January signing Badou Ndiaye had another impressive game after his assured debut at Bournemouth, making more successful tackles and winning back possession more times than any team-mate.

Before that late onslaught, Shaqiri's goal had been their only shot on target. 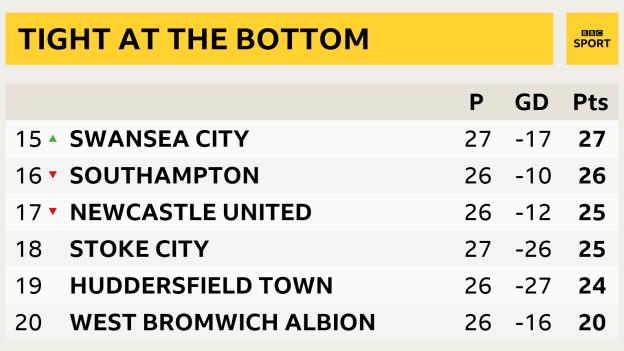 Hard life on the road but Seagulls still impress

Brighton have found life on the road tough during their first season in the Premier League.

They are now without an away league win in eight games since November's 1-0 triumph at Swansea.

The Seagulls have still only scored seven away goals this season, the joint fewest in the division with bottom club West Brom.

But statistics don't always tell the full story when it comes to performances. Hughton's side were highly impressive against Stoke and in Izquierdo they have one of the top flight's most in-form midfielders.

His sumptuous goal, after bursting forward and exchanging clever passes with Solly March and Stephens, comes after an equally eye-catching strike in the win against West Ham last weekend.

He could have had a hat-trick today but for the instincts of Butland, and his pace troubled Stoke throughout.

Brighton host Swansea City next in the league who are one point behind them in 15th.

Shaqiri shines once again - the stats

Stoke City manager Paul Lambert speaking to MOTD: "It's really disappointing not to come away with the win. In the second half we were excellent, and after getting the penalty, it's especially tough to take.

"I changed the system at half time and it helped us out, it looked like we were a different side in that second half. Brighton are a difficult team to play against but it's still a good point for us."

Brighton manager Chris Hughton speaking to MOTD: "At this moment we feel like it's probably two points dropped, against a good Stoke side, who are in good form. I thought we had the better chances, but in a player like Xherdan Shaqiri, there's always that quality to get a goal."

On the penalty decision: "I certainly felt it was not a penalty, but it was a great save by Mat Ryan. It was incredibly soft, you've got two players holding each other, if anything my player is pushing him away and the Stoke lad has gone down very easily. I think it's very, very harsh.

"But saying that, both the save and the tackle were excellent, and we needed Mat Ryan again to make a save straight after from the corner. If you ever need a reason for players following up a penalty, Lewis Dunk has showed why with that tackle."

Stoke travel to Leicester City on Saturday, 24 February (12:30 GMT), while Brighton host Coventry City in the fifth round of the FA Cup on Saturday, 17 February.