It is League One versus Premier League in the FA Cup this weekend - and will there be any surprises?'

Lawro is pitting his wits against a different guest for each round of this season's FA Cup and his opponent this time is YouTube star Tekkerz Kid.

Tekkerz Kid - real name Lorenzo Greer - is an eight-year-old footballer from Birmingham whose videos include skills tutorials and kit reviews, and whose channel has more than 900,000 subscribers.

He's supporting the BBC online safety initiative Own It which is teaching kids how to take control or their lives online.

Lawro is not expecting any surprises in the games on the BBC but is expecting at least one big shock over the weekend.

Swansea boss Carlos Carvalhal goes back to his former side Sheffield Wednesday and Lawro is expecting an unhappy reunion for the Portuguese coach.

"I just have a feeling, quite often when a manager who has just left goes back, everyone wants to prove a point," says Lawro.

"I think this might be the upset of the round."

Gap = how many league positions separate each team

Wigan have knocked out two Premier League teams out on the way to the fifth round but this is completely different gravy. Manchester City played on Tuesday, they will be well rested but they will probably leave a couple of first-team players out just for insurance.

I'm expecting a great atmosphere and a full house at Wigan, which is good for them, but you would argue both sides have bigger fish to fry. Wigan will want to get out of League One and promoted as champions.

How did Lawro do in the fourth round?

On FA Cup fourth-round weekend, Lawro got 10 correct results, including four perfect scores, from the 16 ties for a total of 220 points.

He was up against Poet and Vuj, presenters on YouTube football channel Copa90.

Those scores do not count towards Lawro's total for the season from Premier League fixtures or appear on the guest leaderboard.

In the last round of Premier League games, Lawro got six correct results, including one perfect score, from 10 matches, for a total of 90 points.

He beat comedian Rhys James, who got three correct results, but no perfect scores, giving him a total of 30 points. 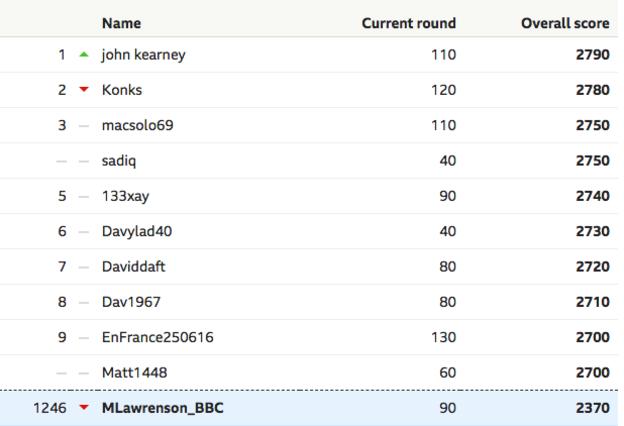 * shows weeks where Lawro had more than one guest, and only the highest score contributed to the guest total.